‘Where’s My Roy Cohn?’ a fascinating exploration of the man who wrote Trump’s playbook 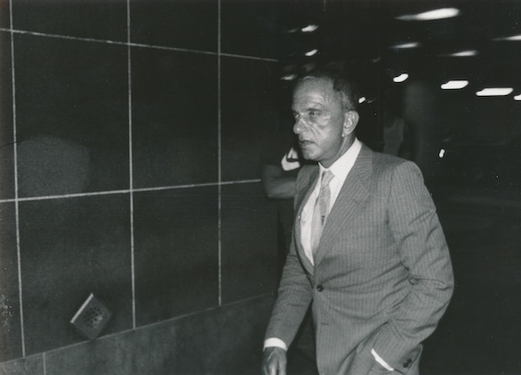 Former Vanity Fair editor-at-large and documentarian Matt Tyrnauer pulls back the curtain on Donald Trump’s notorious mentor Roy Cohn in the rollicking, salacious documentary “Where’s My Roy Cohn?,” a fast and furious portrait that is almost overwhelming in its breadth and depth.

Cohn, born into New York City’s Jewish aristocracy, was known as the brilliant, precocious right hand of Sen. Joseph McCarthy, and later, the legal consigliere for the Mafia. He was combative, eccentric, flamboyant, deeply closeted and unscrupulous, using every ounce of his considerable legal talent and his wide-ranging connections in the worlds of press and industry to manipulate his way to the top. Tyrnauer captures it all in this searing biography that illuminates the man who wrote Trump’s playbook.

What’s fascinating is Trump still follows every play to the letter: attack first, never admit fault or apologize, spin every loss into a victory, weaponize the press, lie always. The strategy is blunt and far from graceful. But clearly it has been effective, playing out on Twitter every day. It’s almost eerie to see archival footage of Cohn in interviews using almost the same language Trump uses today. “Of course I’m tax-avoidant!” Cohn declares, justifying the $7 million he owes the IRS.

Tyrnauer tries to unpack the mystery of Cohn’s persona as well as his personality, which some associates describe as either “disarray” or “pure evil.” Tyrnauer dives deep into Cohn’s provenance, especially into his relationship with his “difficult” mother, Dora, who doted on her only son yet openly wished for one that was somehow “better.” As a young lawyer, Cohn had a hand in pushing for the death penalty while prosecuting the Rosenbergs and cut his teeth on the national stage at McCarthy’s side during his notorious Communist witch hunt.

Later, he starred in what some in the film describe as the first reality show: the televised Army-McCarthy hearings, in which McCarthy and Cohn were taken to task, in a flurry of subtextual gay panic, for scheming to get a special assignment for their newly drafted friend G. David Schine. In New York, Cohn represented a murderers’ row of high-profile clients, including the Gambino and Genovese crime families, Aristotle Onassis, Trump, the Roman Catholic Church and the New York Yankees, while cultivating powerful friendships with financiers, artists, socialites and reporters.

Tyrnauer creates Cohn’s presence with archival TV interview footage, and in his own words through a recording by New Yorker writer Ken Auletta. It speaks to Cohn’s unusual character that several of his cousins, Gary and Dave Marcus and Anne Roiphe, speak candidly about the life of their unconventional relative, a self-described oddball. Tyrnauer includes colorful details about Roy, both mundane (a large collection of toy frogs) and eerily prescient (his commitment to a deep tan).

Perhaps the most tragic of the sidebars about Roy’s peccadilloes is the discussion of his sexuality, an open secret he denied to the end, even as he was dying of AIDS, while receiving experimental treatment courtesy of the Reagans as they were denying the existence of the AIDS crisis. In these moments, peering at Cohn’s repression, his self-loathing, we can feel something akin to sympathy for him, though the theme never flourishes. For a man with no ethics and no empathy, Tyrnauer appropriately reciprocates the favor. His fascinating, revealing film has little empathy for Cohn in return.