University of California President Janet Napolitano to step down 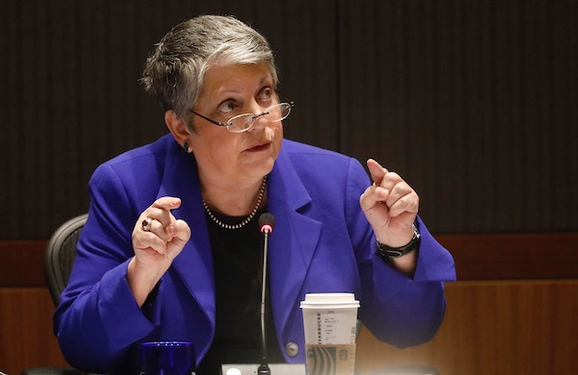 UC President Janet Napolitano speaks on the issue of the college bribery scandal during the Regents meeting at UCLA in Westwood on March 13, 2019. (Genaro Molina/Los Angeles Times/TNS)

University of California President Janet Napolitano, who has championed immigrant students and sexual abuse victims but whose management of the UC system has sparked criticism, announced Wednesday she was resigning.

Napolitano made the announcement at the UC regents meeting at the University of California, Los Angeles. She will step down Aug. 1, 2020.

“It was a tough decision,” Napolitano said but added that “the university will benefit from some fresh blood.” She said she is “looking forward to a very productive year at the end of my presidency.”

Napolitano, 61, said she would join the University of California, Berkeley Goldman School of Public Policy to teach and write in fall 2021 after a year-long sabbatical. She said she was not stepping down because of health, saying she was “completely clear” of cancer after her 2016 treatment, but that she was ready to move on after what would be seven years of UC service.

She did not rule out running for political office, taking a Cabinet position or serving on the U.S. Supreme Court if nominated.

“You never say never and I won’t say never,” she said Wednesday.

She said she was proud of increasing enrollment of California students by more than 17,500 since 2015, supporting first-generation students and those in need of food, shelter and mental health services, and stabilizing undergraduate tuition. After her remarks, she received a standing ovation.

Napolitano became the first woman to lead the 10-campus system in September 2013. She has enrolled historic numbers of California undergraduates, aimed to increase the number of qualified community college students who transfer to UC and expanded efforts to support California high school students from all backgrounds in their pursuit of a higher education.

In 2017, Napolitano led UC to file a lawsuit to stop the federal government’s rescission of the Deferred Action for Childhood Arrivals program. Injunctions granted in the case have allowed more than 500,000 DACA recipients — including members of the UC community — to renew their authorizations to live and work in the United States. Napolitano also launched the nation’s first university effort to provide free legal services to undocumented students and their families.

Several regents praised her leadership. Regent Eloy Ortiz Oakley noted that Napolitano was at first confronted with criticism by immigrant advocates when she joined UC because of her work as Homeland Security secretary overseeing then-record deportations. But in her role as university president she became a leader in immigration policies in higher education. “It was easy to follow you … you came into this … with a real moral authority,” he said.

Regent Sherry Lansing, who headed the search committee that recruited Napolitano, said the president led the system with “great integrity, vision and fairness” and that it was far better off today then when she took the helm in 2013. “This is an extraordinary loss,” Lansing said.

During her tenure, Napolitano sparked a firestorm of criticism after a state audit found problems with her office’s financial management. She also was harshly criticized after her aides intervened in an audit’s effort to assess campus reaction to her office’s services.

Napolitano approved a plan instructing UC campuses to submit responses to confidential questionnaires for review by each college’s chancellor and her aides before returning them to the state auditor, according to a fact-finding report obtained by the Los Angeles Times. Those steps and others “constituted interference,” the investigation said.

Although Napolitano knew about the plan to review the survey responses, investigators said there was “insufficient evidence to conclude that she was aware of (the aides’) conduct in purposefully and systematically targeting unfavorable responses.”

UC Board of Regents Chairman John A. Perez said he would appoint members of a search committee in coming days and that it would be a “consultative process” with input from students, faculty and staff from all 10 campuses about what qualities they desire in the next UC president. He praised Napolitano for her long history of public service.

Before taking the UC helm, Napolitano served as Arizona attorney general, then governor from 2003 to 2009 and U.S. Homeland Security secretary from 2009 to 2013 under President Barack Obama.