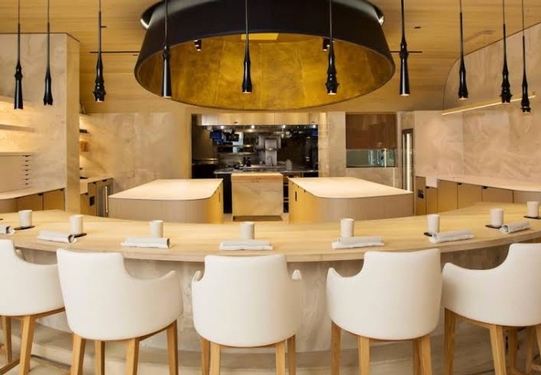 Aitor Zabala is the hands-on chef at Somni, the 10-seat tasting-menu-only Jose Andres restaurant in the SLS Hotel Beverly Hills.

“At Somni, the cooking is not simple. It’s painful, it’s hard, but the essence of it is simple,” says Zabala about the manicured, modernist food the restaurant serves. But, he says, “My favorite place to eat is at a beach bar in Catalonia with gambas rojas and bread and really cold beer. All my best memories are there.”

Rather than have him teach us how to sphericate something, we leaned on him for some of that soulful Spanish cooking, represented in two tapas that play nicely with each other: garlicky sauteed shrimp and tomato toast. “For these dishes, I want simplicity. But with simple recipes, you need to make them right,” explains Zabala. For the gambas, he likes head-on shrimp: “I don’t understand shrimp without heads. What I like about shrimp is what’s inside the head. I like the experience of sucking the juices out of the head and eating the tails with my fingers.”

And he had a smart tip for making the dish: removing the garlic from the oil before cooking the shrimp, then returning it when the dish is nearly done, ensuring the garlic won’t burn and turn bitter during cooking. One of the best parts of gambas al ajillo is sponging up the garlicky oil with crusty bread. It’s even better when that bread is pan con tomate, the classic Spanish tapa of toast smeared with fresh tomatoes and glossed with olive oil. ¶ Zabala quickly, effortlessly puts together both dishes, then picks up a shimmering slice of pan con tomate and observes, “This is a beautiful final product without much work.” He swipes it in the gambas’ sauce. “These are the beautiful things in life.”

Pan con tomate is bread, tomato, olive oil, salt and nothing else, so it’s important to get the best of each. Zabala buys pan de cristal from a purveyor in Spain because the outside gets really crunchy while the inside stays a little soft. Ciabatta results in a similar texture and is widely available here. For the tomatoes, Zabala prefers heirloom Cherokee Purples, but any really ripe, flavorful tomatoes will work. And this is a dish where using the highest-quality extra-virgin olive oil makes a difference. Zabala likes Marques de Valdueza, which you can buy online, or any other good Spanish Arbequina oil with fruity notes.

2. Put the whole bread on a baking sheet and broil, turning once, just until crunchy on the outside, one to two minutes. Transfer to a cutting board. When cool enough to handle, use a bread knife to slice the bread in half as if for a sandwich. Return to the pan, cut sides up and toast until golden and crisp, one to two minutes.

3. Cut the tomato in half through its equator (not from top to bottom). Gently rub the cut side of the tomatoes against the cut sides of the toasted bread to evenly coat the surface with a thin layer of tomato juice and pulp.

4. Generously drizzle olive oil all over the tomato-coated side of the bread and tilt to let the oil run into the craters of the toast. Sprinkle with salt, slice into smaller pieces and serve immediately.

There are countless versions of gambas al ajillo throughout Spain, but all combine shrimp, garlic and olive oil. Zabala adds sherry to round out the flavors and finishes with parsley and lemon zest and juice. He also employs smart techniques to highlight the ingredients. He starts with raw garlic slices in cold oil, then warms both together so the garlic cooks evenly all the way through and infuses the oil with a deep aroma. Zabala does the same with whole dried guindilla chiles, which deliver a smoky spiciness. You can buy them online or in specialty stores, or substitute other small dried red chiles. Finally, Zabala uses a Japanese ceramic donabe pot in place of the traditional Spanish terra cotta for the most even heat distribution, but either works, as does a Dutch oven or heavy skillet. You can double the quantities below for a larger serving; just be sure to use a larger pot as well to avoid overcrowding the shrimp.

1. Prepare the shrimp by snipping off the legs with kitchen shears. Then carefully push the shells off the bodies. Separate the shrimp heads from the tails by using a sharp knife to cut off the heads with one-third-inch of the tails attached to keep the juices inside the heads.

2. Generously coat the bottom of a medium donabe, terracotta pot or Dutch oven with the canola and olive oils. Add the garlic, sprinkle lightly with salt and set over medium-low heat. Bring to a sizzle, stirring occasionally, until the garlic chips start to dance and turn golden brown around the edges, about two minutes. Don’t let them burn. Transfer the garlic to a paper-towel-lined plate and reserve.

3. Add the chiles to the hot oil and cook, turning, until a shade darker, about 30 seconds. Transfer to the plate with the garlic.

4. Add the shrimp heads, sprinkle lightly with salt and cook, turning occasionally, for 30 seconds. Add the shrimp tails, sprinkle lightly with salt and cook, turning, for 15 seconds. Return the garlic and chiles to the pot and shake and swirl the pot so the garlic coats everything. Add the sherry and let the alcohol burn out, about one minute. Zest half of the lemon half directly into the pot, then stir in half of the parsley. When the shrimp become opaque and their juices emulsify with the oil into a sauce, remove from the heat. Sprinkle with the remaining parsley, squeeze in a few drops of lemon juice and serve immediately.

Gambas al Ajillo with Shrimp Tails: Substitute eight extra-large or jumbo shrimp tails for the whole shrimp and cook, turning, for 30 seconds before returning the garlic and chiles to the pot.

There are endless variations on pan con tomate. Here’s how Zabala makes it:

Zabala says, “The most important thing is good bread. After that, it’s up to you.” What he means is that the quality must be the best, whether you use a crusty baguette or thick focaccia. Zabala prefers pan de cristal, which means “glass bread.” Some Spanish chefs who use pan de cristal bake the split loaves until they dry out completely and develop a cracker-like crunch; others barely toast the bread so that it’s soft enough to fold in half. Zabala broils the whole loaf first until crisp, then splits and toasts the centers just until dry and golden. He likes the centers to remain a bit soft so they turn mushy post-tomate. For those who don’t like pan de cristal (or can’t buy it), baguettes are often used. Some cut thick slices, others split the baton as if for a sandwich, and all toast to their desired crispness.

Zabala’s tomato rules are to use ripe, flavorful tomatoes and not to over-rub the bread with them. “It’s not right with too much tomato,” Zabala says. He swipes the cut side—always sliced through the equator, not from stem to end—only once and gently across the toast. Before the tomatoes, some also rub garlic against the bread, but not Zabala.

Zabala splurges on the highest-quality first-cold-pressed extra-virgin Arbequina olive oil from Spain. Unheated, its complex taste comes through when Zabala drizzles on enough to run through the bread’s rivulets and add a golden sheen to its surface.