Wild time on a Serengeti safari 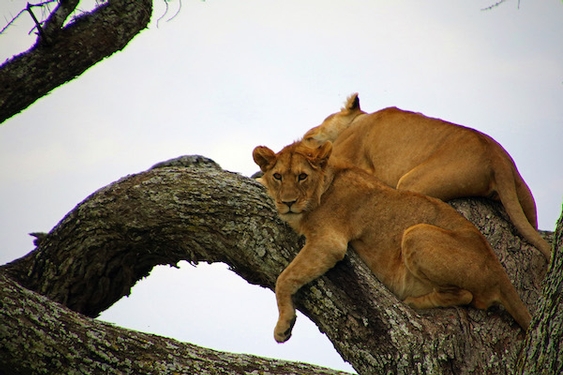 A young lion settles onto a lofty tree branch, presumably to get away from biting flies below in the Serengeti. (Norma Meyer/San Diego Union-Tribune/TNS)

Hello kitty — and please don’t tear me to shreds. In Tanzania’s world-famed Serengeti National Park, a sleek fanged cheetah shockingly jumps up on our safari jeep just a claw’s swipe away from us.

Let me reiterate: We’ve been carjacked by a wild big cat!

The extraordinary encounter in the savanna grasslands begins as we’re stopped at a distance watching the on-the-prowl female carnivore, who casually turns, slowly paces toward our Land Cruiser, then disappears at our vehicle’s rear. All six passengers, including myself, are standing up in the open-air pop-top facing that direction when suddenly — with a scratchy thud and our audible gasps — the spotted creature lands on the back roof right before our eyes. She curiously peers at us, as if we’re the surprise. Our Tanzanian guide Moses (pray for a miracle) calmly whispers, “Be quiet.”

Fortunately no one resembles a tasty gazelle antelope, which cheetahs — who rule as earth’s fastest mammals — race down, viciously bite in the neck to suffocate and bloodily disembowel to devour. I once witnessed this unforgettable slice of nature in Kenya, so today’s regal party-crasher (with their black “eyeliner,” cheetahs are Hollywood glam of the jungle) has me both fascinated and with my fur up. Normally, cheetahs perch atop high termite mounds to survey their antlered prey. This hungry cheetah commandeers a dusty Toyota for a much better view.

For nearly 10 (oh is my heart thumping) minutes, the keen-visioned predator changes positions as she intensely scans for hoofed dinner — when she rotates on all fours, the black-and-white ringed tip of her long tail pokes into our cab; when she erectly sits, her muscular left haunch spills over padding above the back seats. (Those occupants, two 20-something guys, have wisely ducked and nervously stuffed themselves into the corners.) Hearing cameras click, the quizzical cheetah again fixes amber eyes on the rest of us upright, frozen paparazzi. Mind you, we’re in a closed-window 4x4, so if she dives in or accidentally falls in, it’ll get ugly. Eventually, the confident cat leaves only after another safari truck pulls alongside and deliberately guns its engine.

If it seems like a National Geographic episode, well, by chance, I’m on a National Geographic Journey with tour operator G Adventures. The seven-day “Tanzania Safari Experience” is also one of G Adventures’ Jane Goodall-endorsed itineraries, focusing on protection of wildlife. Which is why the next day we listen to a conservation lecture, coincidentally given by Dennis Minja, manager of the Serengeti Cheetah Project and a field researcher who keeps tabs on 120 of the 200 cheetahs roaming the park.

He’ll try to identify the jeep-leaper through our photos; every cheetah has a unique spot pattern. Later he emails to inform me she is Grace, previously named by him after the elegant real-life princess and movie star Grace Kelly. (His study subjects also include Bradley and Cooper.) Grace is about 3 years old. “When she reached the age of 8 months, she started jumping on the cars, and she perfected this behavior during her adolescence,” he writes. That trick isn’t condoned for her safety either. Grace already beat the odds — 95% of cheetah cubs don’t survive to 18 months, often slain by lions to eliminate competition or by hyenas for food. Grace became independent early last year, just months before her mother was tragically killed by a speeding vehicle in the Serengeti.

It turns out before pouncing onto the roof, Grace first hopped up and straddled our two back spare tires — one of those claw-punctured wheel covers aptly reads: “Your Journey Begins Here.”

This journey is a cat-a-rama. During just a day and a half of game drives, I count 25 magnificent lions, five gorgeous cheetahs and three distant leopards in the Serengeti, where we’re mesmerized by spectacular striped parades of zebras and thundering caravans of bearded wildebeest, the last to make the massive annual migration north to Kenya. We also travel inside the planet’s largest intact volcanic caldera, Ngorongoro Crater, a 3 million-year-old wonder crawling with untamed animals (a genuine cat fight occurs when a snarling teeth-bearing pride chases off an intruder lioness).

And throughout the weeklong road trip, we gain cultural insights — in one rustic village, I learn to brew pungent banana beer with locals, and in another, I’m in awe of tribal “Maasai mamas” who build lifesaving smoke-free stoves in their airless cow-dung huts. All along the way, children excitedly greet us in Swahili (“Jambo!”) and in the Rift Valley, three school-age Maasai cattle herders, cloaked in traditional red shuka robes, approach and proudly count aloud in English from 1 to 10.

The Serengeti is one of the world’s greatest lion lairs, with around 2,800 beastly kings marauding about the 5,700-square-mile park. Scouting from the pop-top, we find fierce felines up to all kinds of tricks on endless golden grassy plains.

Tree-climbing lions are rare. But a family of them strangely lounges on branches of an acacia tree, the mother sacked out on her belly, while her two fidgety youngsters keep readjusting themselves on separate limbs, as if griping, “Why are we up here?” (Moses says some lions scale trees to get away from irritating flies.) Miles away, a bonded pride snuggles in a cozy heap, the females licking and grooming each other’s faces and cubs, while lazy orange-maned Simba naps behind bushes and a rowdy juvenile springs up and down tormenting a mongoose as if it’s a toy. We come across this group after noticing a towering tree loaded with lion-averting baboons.

And speaking of spooky primates (those baboons with scary old-man faces!), en route to the Serengeti, we visit the UNESCO heritage site, Olduvai Gorge, where acclaimed anthropologists Louis and Mary Leakey excavated evidence of early man dating back nearly 2 million years. There, I gape at the heralded skull of what was once believed to be a vegan apelike, prehuman with huge molars, dubbed “Nutcracker Man.”

Back on the meat-eater front, a vigilant lioness has stashed her fuzzy whelps in a granite rock outcropping to deter murderous hyenas and leopards. One adorable cub gnaws on what looks to be a Thomson gazelle fawn’s lower leg. Later, for some time, we follow two lionesses patiently creeping toward a sizable herd of unsuspecting zebras, the male lion lagging far behind (the women do all the dirty work first). The pair ultimately and futilely dash after striped targets, who frantically stampede off in a black-and-white blaze.

This night, at the welcoming Tortilis Camp in the heart of the Serengeti, I roll up the heavy canvas flaps of my glamping tent, so the entry and sides are just mosquito screening. Crazy, kinda, but I want to hear the calls of the wild. And do I. Into the wee hours, wildebeest bellow (like a cow’s moo crossed with a deep-voiced frog), zebras weirdly bark like little yappy dogs, and hyenas chillingly cackle and scream. But the first noise that resoundingly echoes when I hit the pillow is a guttural soul-shaking HUFFF-HUFFF-ROARR-RRRR. The next morning, I learn a pride of 22 lions lives in this territory.

Earlier in the trip — the same day a glorious herd of elephants moseys up to our jeep in Lake Manyara National Park — a local guide named Mkopi walks us through Mto wa Mbu village, distinctively comprised of two-legged inhabitants from 120 ethnic tribes. Not terrific for a travel brochure but in Swahili the village means “River of Mosquitoes.”

Inside a dirt-floored banana-leaf shack, woodcarvers from the Makonde tribe masterfully sculpt figurines of their malnourished kin who fled as refugees from Mozambique: nearby under shady palm trees, artists create wildlife-themed tinga tinga paintings and offer me a piece of a ceremonial cow’s head cooking in a pot. Like elsewhere in Tanzania, the friendly village women are swathed in “kangas,” beautiful African design fabrics of lemon yellow, lime green, cherry red and other vibrant colors.

One woman peels bananas under hanging laundry while Mkopi intricately explains how the Chagga tribe brews “mbege” (banana beer), an age-old lengthy process of fermenting boiled bananas with a liquid millet porridge. The thick, yeasty beer comes in a 1-liter plastic cup to be shared, so after I blow off the bubbles as told and sip (ooh, tangy!), it’s communally passed around to beaming villagers.

“We use it for bridal dowries and to settle arguments,” Mkopi says.

The “Maasai mamas,” though, blow me away. Another morning, in a tiny Maasai village, we meet these determined tribal women trained in the G Adventures-sponsored Clean Cookstoves Project. Dressed in a checkered shuka and her head traditionally shaved, “stove engineer” Kakenya first invites us into a family’s cow-dung-and-mud hut filled with choking smoke from typical open-fire cooking. Indoor smoke is a major cause of death in such poor rural areas, causing cancer, lung and heart disease, and burns. Clean-cooking stoves are a simple cheap solution; so far, more than 750 donated ones have been installed in 60 Maasai villages.

In an adjacent hut, a “Maasai mama” vigorously builds a new stove’s brick chimney, her hands muddied in mortar, ancestral beaded bracelets wrapped clear to her upper arms. “We are very powerful,” Kakenya rightly proclaims. Out in the fields, a young mother milks a cow into a plastic mug that will be her 3-year-old son’s breakfast.

For me, the slogan on our wheel cover — “Your Journey Begins Here” — has taken on a whole new meaning.

National Geographic, in partnership with G Adventures, offers over 90 different global “Journeys,” including the seven-day “Tanzania Safari Experience.” That tour departs regularly throughout the year, is limited to six guests and includes guide, game drives, transportation in a 4x4 vehicle, lodging and most meals. Prices vary by dates, but check for sales (one last-chance deal just went for $3,112 per person); gadventures.com.

(Meyer is a freelance travel writer.)