Dead to Me: Cuban Ballerina 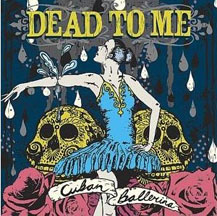 Living in Los Angeles, there are only two things that can get me out of bed before 10:30 a.m.: earthquakes and Del Taco. There hasn’t been an earthquake in years so these days Del Taco’s savory breakfast burritos are the lone reason to end my slumber early.

On a recent mid-morning pilgrimage to the Del (we’re on a first name basis by now), I gently placed Dead to Me’s debut Cuban Ballerina, in my CD player for the first time. I was truly blown away.

By the time I parked at Del Taco brilliant tracks such as “Cause of My Anger” and “Something New” had me glued to my seat and unable to even think of turning off the stereo. So I stayed, until Dead to Me had completed its 25 minutes of brilliance. At this point I raced into the restaurant to order my breakfast burritos.

Cuban Ballerina is currently available.
Article posted on 7/18/2006
This article has been viewed 1408 times.