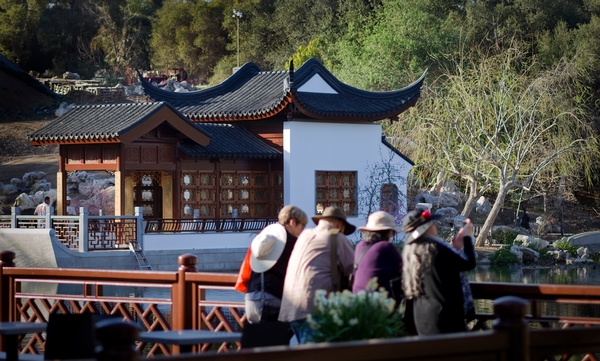 he newly completed Clear and Transcendent Pavilion has open sides and is designed as a stage for music and other performances at the Huntington Chinese Garden on February 19, 2014.

So it seems that railroad magnate Henry E. Huntington and his wife, Arabella, were basically hoarders. And I mean that in the best sense of the word.

Way back in the day — during the so-called Gilded Age — the couple habitually collected rare books, glorious pieces of fine art and distinctive botanical specimens. They could not be stopped. They filled whole train cars with this stuff and transported it to their sprawling ranch in San Marino, Calif., about 12 miles from downtown Los Angeles.

As Henry and Arabella neared the end of their lives, rather than unloading their wares in the world’s largest garage sale, they turned their estate into a collections-based research and educational institution for the public’s benefit. Lucky for us.

I’ve been attending an annual conference in nearby Pasadena for nearly 20 years and had always heard great things about The Huntington. But I had never bothered to explore its abundant offerings until last winter. My bad.

As a newbie, however, where does one start? After all, there are 16 themed gardens to explore, thousands of amazing works of art to ogle and an entire library packed with rare books and manuscripts. “Overwhelming” is an understatement.

At the suggestion of a fellow visitor, I wound up in the Mapel Orientation Gallery, where I learned all about the Huntingtons and their property via a brisk 10-minute film (I love a good backstory). And it was here that I met Lisa Davis, an ultra-enthusiastic docent.

“(Huntington) was a very modest man — not like Trump,” she informed me. “Even though he was richer than Trump.”

Lisa, a native of Vienna and former college instructor, has volunteered at The Huntington for 23 years and she, apparently, is one of its biggest cheerleaders. During our chat session, she regaled me with stories of the European and American art housed on the property, and of the marvelous gems that can be found in the library — including an extremely rare, complete copy of the Gutenberg Bible printed on vellum.

“Not even the Vatican has one,” she blurted. “I love it!”

I could have hung out with Lisa for hours, but, oh, there was so much to see. And I quickly discovered that, even with its rare and extremely valuable treasures, The Huntington manages to radiate a playful, unstuffy vibe.

For example, there’s a fun Children’s Garden and crafts activity stations that cater to the youngsters. There are brochures instructing visitors how to conduct their own “quirky” tours.

I even found a spot that urged me to “Take a Selfie With Blue Boy.” Ha! Surely artist Thomas Gainsborough never imagined the rampant use of cellphones while he was working on his fabled portrait in the late 1700s. (The actual painting was undergoing conservation treatment).

After snapping a couple of shots with little boy Blue (he was very accommodating), I dropped in on the Huntington Art Gallery. This grand, 55,000 square-foot building was where Henry and Arabella lived in luxury. It now serves a couple of functions: to maintain the Beaux-Arts mansion as a period home, and to provide displays of The Huntington’s amazing European art collection.

My jaw was in perpetual plunge mode as I gazed at the elegant furnishings in the drawing rooms, dining room and the south terrace. And I wondered how many decades it would take me to get through the gigantic wall of books presented in the room where Henry routinely lost himself in literature.

As for the art, I was told that the collection of British portraits from the 18th and 19th centuries is considered “one of the greatest anywhere.”

Eventually, the outdoors called to me. Soon I was wandering over large expanses of manicured lawns while regretting my failure to bring a blanket and fat book to peruse under the sun. All the gardens at The Huntington offer their own aesthetic pleasures: The Jungle Garden, with its gurgling brook and canopy of greenery, transported me to the tropics. And the Japanese Garden, with its koi-filled ponds, is a magical destination.

My favorite turned out to be the enchanting Chinese Garden — formally known as The Garden of Flowing Fragrance (Liu Fang Yuan). It features a man-made lake, stone bridges and waterfalls against a wooded backdrop of oaks and pines.

The Chinese Garden has a calming effect, epitomized by a simple stream-side structure called the Pavilion For Washing Away Thoughts. It’s a place that encouraged “quiet contemplation.”

Feeling like I was a million miles away from the hustle and bustle of Los Angeles, I happily obliged.

The Huntington Library, Arts Collections, and Botanical Gardens are open from 10 a.m. to 5 p.m. daily (except Tuesday) at 1151 Oxford Road in San Marino. Admission is $13 to $25.

The museum is marking its centennial with a yearlong series of special exhibitions and programs that began in September. It was in August 1919 that Henry E. Huntington (1850-1927) and his wife Arabella (1851-1924) drafted the trust indenture document that established The Huntington as a collections-based research and educational institution. It opened to the public in 1928.

Find more information about The Huntington and its centennial festivities at www.huntington.org.