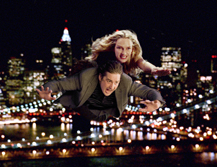 Since making a name for herself in Quentin Tarantino’s modern-day classic Pulp Fiction, Uma Thurman has become that rare Hollywood beauty who can steal your heart and kick your ass at the same time. From her performance as Poison Ivy in Batman & Robin to her starring role in the Kill Bill films, the leggy, blonde-haired vixen has had no problems raking in the box office dollars as the bad girl men just can’t help falling in love with. Therefore, it should be no surprise that her latest movie, My Super Ex-Girlfriend, features the Boston native in a role she seems born to play.

In the Ivan Reitman comedy, Thurman plays Jenny Johnson, every man’s ideal girlfriend – that is, if you were to go off looks alone. When Jenny becomes a bit too possessive for her new boyfriend Matt (Luke Wilson), he breaks up with her, having no idea what wrath he has just unleashed. For it turns out that Jenny’s not your average woman … she’s a superhero.

Now, Jenny (otherwise known as G-Girl) is unleashing the full fury of her super-powered wrath as she tries to bust up Matt’s new romance with his co-worker, Hannah Lewis (Anna Faris). It’s the worst breakup imaginable because, after all, hell hath no fury than a superwoman scorned.

When it came to casting the part of Jenny/G-Girl, Reitman knew he had to find an actress who would be believable with superhuman powers. After all, not just anyone can pull off throwing a shark through a high-rise window. Furthermore, Reitman needed an actress who had the requisite comedic skills to play off of Wilson’s every man persona. According to Reitman, there was no doubt in his mind that Thurman was his girl.

“Who else could play the part?” he asks. “Uma is a special effect in real life! She’s a wonderful actress, gorgeous and she has done rigorous stunt work before in the Kill Bill films.”

While Thurman is most closely associated with her roles in Tarantino’s movies, the actress has demonstrated her comedic chops before in films like The Truth About Cats & Dogs, Prime and Be Cool. The chance to once again explore her comedic side, as well as tackle Jenny’s super-heroics and super-neuroses, was enough to get Thurman interested in Don Payne’s script.

“I loved the idea that Jenny is neurotic, vulnerable and a superhero,” says Thurman, who notes that her instincts about taking on the part were on-target. “I’ve never had more fun making a movie. I love doing comedy – it’s a passion of mine. You don’t often see a female lead like Jenny. She’s angry almost all of the time and that was great fun to play. Ivan encouraged me to play Jenny as broadly as possible, and to take the risk of making the character seem like a fool.”

Reitman describes Thurman’s character as a “very verbal person,” someone who “talks too much and hasn’t yet learned the fine art of self-censorship.” Anyone who’s followed Thurman’s career knows this couldn’t be further from the actress in real life, as she’s managed to achieve something in Hollywood most A-list stars only dream about – keeping her personal life personal.

Not that the general public isn’t up to date with Thurman’s list of super ex-boyfriends. From her failed marriages to Gary Oldman and Ethan Hawke to her latest supposed break-up with New York hotelier Andre Balazs, America has watched Thurman from the sidelines go from one bad relationship to the next. But unlike the Tom Cruises and Angelina Jolies of the world, Thurman’s managed to keep most of her break-up details out of the public eye.

Take, for example, her divorce to Ethan Hawke. While the tabloids were buzzing with reports of infidelity (going as far as linking Thurman romantically with the man who many claim made her a star, Tarantino), Thurman never once informed the general public of the real reason she and the father of her two children called it quits.

The closest Thurman ever came to opening up about Hawke’s supposed affair was during an interview with Oprah, where Thurman responded to the Queen of Talk Shows’ inquiry about a “betrayal of some kind” by stating, “There was some stuff like that at the end. We were having a difficult time, and you know how the axe comes down and how people behave and how people express their unhappiness.”

Even now, mum’s the word on Thurman’s breakup with Balazs. The 36-year-old told Parade magazine in June, “I’ve been in and out of a relationship with a wonderful man, and I’m out of it now … I’m just on my own.” And while Thurman’s representative insists her client hasn’t had a change of heart, photos that surfaced of the couple frolicking on the beach earlier this month have people wondering if the on-again, off-again couple’s back on again. (Don’t expect Thurman to hold a press conference if they are.)

While the world may never know what’s really going on behind Thurman’s closed doors, the actress keeps herself busy enough onscreen so that no one will ever go through Uma withdrawal. Thurman is already rumored to be attached to Vadim Perelman’s (House of Sand and Fog) next project, In Bloom, and with a resume that includes such features as Beautiful Girls, Gattaca, Dangerous Liaisons and The Producers, it will only be a matter of time before someone else is lucky enough to sign the Oscar-nominated actress to his or her film. After all, just ask anyone on the set of My Super Ex-Girlfriend – Uma Thurman is the complete package.

“Uma would come into a fitting room, put on the clothes, move and stand in certain ways and just transform the clothes into something different,” marvels Super Ex costume designer Laura Jean Shannon when asked what it was like working with the model-turned-actress.

“It was a tricky and complicated stunt, and we had two people in the air, fighting and plummeting to earth – and looking great the entire time,” states stunt coordinator George Aguilar of Super Ex’s major fight sequence, adding that Thurman needed little rehearsal time due to her training in wirework and martial arts for Kill Bill.

Looks. Talent. Athleticism. Uma Thurman really does have it all. And if you were to ask any of the men who’ve crossed Thurman’s romantic path what they think of No. 21 on Maxim’s Hot 100 list, no matter what’s happened in the past, they’re sure to agree on one thing: Uma Thurman really is their super ex-girlfriend.

My Super Ex-Girlfriend releases in theaters July 21.
Article posted on 7/18/2006
This article has been viewed 2762 times.