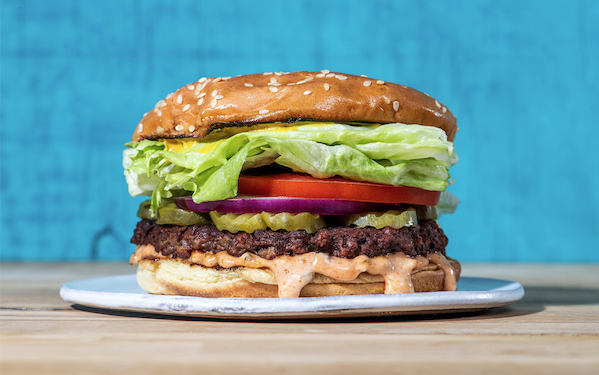 Impossible Foods recently released its vegan burger “meat” in Southern California supermarkets as the start of a national retail rollout. It’s the meatiest of the meatless meats on the market (though Beyond Meat’s product isn’t far off and may be arguably healthier), a reasonable choice to bring home if you’re looking to eat less meat or if, like me and my kids, the threat of an impending climate emergency makes you want to think more about your eating choices.

After a few rounds of trial and error, I’ve nailed the formula for the most delicious homemade Impossible burger (and it’ll work with the other meatless stuff in the market too). The key is to minimize its texture and maximize its flavor. Here’s what you’ve got to do to make the best plant-based burger.

Use a skillet, not a grill.

You want to deeply brown the patties, so you need the whole patty to hit a hot surface. A grill’s grates leave gaps on the patty, plus the “meat” is sticky and may fall apart when flipped.

Most restaurants serving Impossible burgers make the patties too thick: the non-beef texture doesn’t feel quite right. Instead, pat a 3-ounce ball into a patty the same diameter as your bun. It’ll end up one-quarter- to one-third-inch thick.

Sear them in oil.

Some package directions will tell you not to, but you want a deeply browned burger, and scorching-hot oil is the ticket to getting it.

This was the biggest revelation: salt releases the faux blood on raw Impossible “meat,” causing it to steam in the pan and prevent a crust from forming. After you flip the patty, give the browned side a generous rain of salt and pepper while the other side cooks and the patty’s still hot in the pan. You don’t need to season the other side.

Lean into the condiments.

Special sauce, lettuce, tomato, pickle, the whole shebang: The more texture and flavor you layer into that burger, the easier it is for the “meat” to recede into the pleasure of layers of textures and tastes.

The toppings and condiments I call for here are for a classic burger with a spicy kick. You can put whatever you want on these burgers as long as you’re adding loads of flavor. You can follow the recipe below using Beyond Meat as well. Buy their pre-formed patties, then slice them each in half through their equators so you end up with two thin patties.

1. Make the spicy special sauce: Stir together the mayonnaise, relish, ketchup and cayenne in a small bowl.

2. Divide the burger “meat” into four even pieces (3 ounces each) and shape into thin patties the same diameter as your buns. Press firmly so that the patties won’t fall apart.

3. Heat a large, well-seasoned cast-iron skillet, griddle or nonstick pan over medium-high heat. Coat lightly with a thin sheen of oil and put the burger buns, cut sides down, on the hot surface. Cook until dark golden brown, one to two minutes. Transfer to plates, cut sides up.

4. Add more oil to the hot skillet so that the bottom is completely coated with one-eighth of an inch or more and heat until it looks wavy. Carefully slide the patties into the shimmering oil and cook until the bottoms are evenly dark brown, two to four minutes. Slide a thin spatula under a patty, wiggling if needed to help release it from the pan, and carefully flip. Repeat with the remaining patties. Sprinkle the browned tops generously with salt and pepper. Fry until the other sides are deeply browned, two to four minutes.

5. Meanwhile, divide the special sauce among the bun bottoms. You should have a thick coating. Spread mustard all over the bun tops. Place the hot patties onto the bun bottoms. Shingle a layer of pickles over each patty, then top with the onion, tomato, lettuce and bun tops. Serve immediately.

Make Ahead: The special sauce can be refrigerated in an airtight container for up to one week.