Kanye West preaches a message of love and faith on ‘Jesus Is King.’ Too bad about the messenger 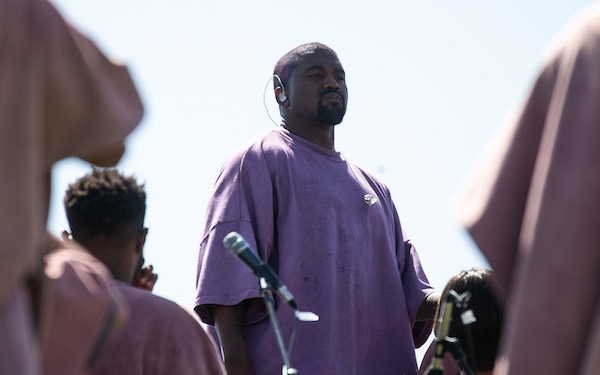 Kanye West, pictured at Coachella in April, presented a playback of his new album and film Oct. 23 at the Forum. (Kent Nishimura/Los Angeles Times/TNS)

There’s a reason the parable of the prodigal son deeply resonates with us, regardless of our relationship to the Bible.

It’s the story of a lost son who has squandered it all and returns home to be met with unconditional love instead of scorn.

By human nature, we are inspired by narratives of redemption. And there’s no public figure toying with redemption more than Kanye West.

The idea of restoring one’s self — in West’s case, that’s meant becoming a born-again Christian — is at the core of the artist’s new gospel-influenced album and accompanying IMAX film, “Jesus Is King.” The projects, released Friday, arrived after months of West traveling the country with his Sunday Service church revival, which followed, in whiplash fashion, his MAGA-hat-wearing embrace of President Trump and public rhetoric that seemed to apportion some blame on blacks for slavery.

“Jesus,” his ninth record, finds West rapping and singing profane-free lyrics about his newfound spirituality over soulful, immaculately produced hip-hop. He plans on touring the music immediately and has denounced the multi-platinum Grammy-winning work that made him the most influential rapper and producer of his generation.

For years, West — the son of a scholar and a former Black Panther and photojournalist turned pastoral counselor — was a powerful, pro-black artist. He famously declared that then-President George W. Bush didn’t “care about black people” after Hurricane Katrina. He criticized the music and fashion industries for their treatment of black creatives, blasted homophobia within hip-hop and disrupted Taylor Swift’s acceptance speech at the MTV Video Music Awards after she won over Beyonce (nominated for her groundbreaking “Single Ladies” video).

His actions, messy as they were, always appeared in service of advocating for the betterment of his people, black people. And it fell in line with his music, which veered far away from gangster posturing in favor of thoughtful, relatable observations on family, sexuality, religion, education, prejudice and wealth.

“He had one of the best hip-hop runs of all time,” says veteran hip-hop journalist Keith Murphy. “Kanye comes from black intellectualism and black excellence. But you can’t go around wearing a MAGA hat saying it’s God’s practical joke. What he’s doing, mixing politics into religion, sounds like a combustible cocktail.”

West has never been far from the teachings of Christ. The gospel church and its songs of praise and worship — born from the bellies and lungs of enslaved Negros — have informed his work from the start. Beyond 2004’s jubilant, Grammy-winning “Jesus Walks,” records like “Spaceships,” “Touch the Sky,” “Amazing,” “The Glory” and “Ultra-light Beam” show an artist consistently crafting rap hymnals.

His performances also transformed into grandiose houses of worship. On his Yeezus tour, he was presented as an apostle, with Jesus rising from atop a glowing pyramid; supporting “The Life of Pablo” album, he floated across arena floors, literally hovering above his loyal flock.

Since the release of 2013’s “Yeezus,” West’s work has increasingly hinted at a man who sees himself as a god among men, a feeling shared among critics and fans when he started holding Sunday Service at his Calabasas estate in January.

The invite-only gatherings were described by his wife, Kim Kardashian West, as a “musical ministry” and featured faith-based reworkings of West’s repertoire, plus spirited takes on R&B, soul and traditional gospel records.

For those not on the guest lists, Sunday Service was experienced through Kardashian West’s Instagram account or from those in attendance unbound by NDAs, lending the affair a level of viral exposure that hasn’t always felt pure — particularly when taken with Kardashian West’s reduction of gospel as “just music.”

Sitting on a circular mound West had installed atop a nature preserve in the Santa Monica Mountains in the spring, I witnessed the glory of bodies deeply lost in praise as the performer and the Sunday Service choir prepped for their biggest showing yet, an appearance during April’s Coachella festival to celebrate Easter.

It was impossible not to be moved by the splendor of the choir joyfully singing reworked soul classics and traditional worship music or, later, by 50,000 fans swaying together as Teyana Taylor pushed her voice to its edges on Marvin Sapp’s “Never Would’ve Made It.” There was something striking in the earnestness of West huddled in a corner, away from center stage, dancing alone.

But that’s the beauty of gospel music and exactly why West’s commodification of it continues to be a thorn in the sides of African Americans who have found his behavior and his comments harmful. Aside from his comments on slavery echoing common revisionist Civil War history, he’s compared himself to Nat Turner, questioned why Harriet Tubman should be on the $20 bill (Why not Michael Jordan?, he asked) and said black people were too focused on racism.

This month in Queens, N.Y., some churchgoers walked out of a service after West descended upon its pulpit. At Howard University, one of the country’s historically black institutions, the rapper baffled the audience by advising, “If they throwing slave nets again, how about we don’t all stand in the same place.” A video of his guitarist’s confused reaction immediately went viral.

At the Forum in Inglewood, Calif., on Thursday, fans slid their phones in magnetic pouches and filed into a nearly dark arena that had been transformed into a field — replete with tall, bristling vegetation and the sounds of crickets chirping — to hear “Jesus Is King” and see its complimentary IMAX documentary. Some onetime supporters expressed skepticism about his motivations.

“I found Sunday Service exploitative and opportunistic,” says Josh Briond, a West fan since his debut and cohost of the Millennials Are Killing Capitalism podcast. “It’s narcissistic, as everything is with Kanye: It’s about Kanye.”

“This is really for his followers. There is no spirit,” says Dominique Zonyee, an L.A.-based marketing strategist who grew up in the church. “The message of God is not translating. They are praising a man who is embodying God. That’s not what the gospel is. It’s for worshiping the Lord, not a man.”

“Jesus Is King” has been met with largely tepid reviews. Critics have called the album lyrically lazy, not very good and undercooked. West knows how to craft bangers, and there are plenty on “Jesus Is King”: “Follow God” and “On God” fall in line with the heady foot-stompers he’s been making for years. The Sunday Service Choir’s jubilant performance on opener “Every Hour” is a highlight, as is West stretching his raspy voice on “God Is” and the reunion of the Clipse on the frosty, minimalist “Use This Gospel.” But “Jesus” doesn’t appear to say much beyond surface-level devotionals, and silly lyrics like “What if Eve made apple juice?” and “Closed on Sunday/ You’re my Chick-fil-A” certainly don’t do any favors.

So what are we to make of the new Kanye? The Kanye who says he’s spiritually reborn yet espouses rhetoric that’s hurtful to the people who have followed him? The Kanye who wants to spread the word but appears to be in search of his purpose?

In a piece on the Christian hip-hop site Rapzilla, Elijah Matos wrote: “For the sake of argument, say that Kanye West’s ‘reawakening’ is an opportunistic business scheme, but maintains a strong faith-based tone with a push towards Christ. In this case, West would fall under those who are ‘not against you,’ and Christians would fall into the same category as the disciples. Although Yeezy may not fit the mold of a conventional Christian artist, using his talents to proclaim Christ, even if it is just for a moment in time, ‘Jesus Is King’ can be a vehicle for the advancement of the Gospel.”

What’s certain is that West’s spiritual journey — whatever it may be — isn’t for us to judge. That lies between him and his god. But if his awakening has shown us anything, it’s how far we are from the Kanye West we once believed we knew.