While political campaign merchandise can play an important role in a candidate’s fundraising and branding efforts, once the votes have been cast and the results tallied, the T-shirts, ball caps, scarfs and tote bags are often shunted to the back of the closet never to be seen again.

Part of that is politics, of course, but part of it is because the stuff lacks any discernible sense of style. Occasionally, though, a campaign, logo or look will have a certain something that gives it a shelf life longer than the election cycle. Knockoffs of campaign logo tees from Jesse Jackson’s 1988 run for the White House have reportedly become trendy in Asia, for example, and, while Sen. Bernie Sanders failed to secure the Democratic nomination in 2016, his distinctive logo had gained so much pop-culture cachet it ended up inspiring Parisian runway looks.

Of the dozen candidates who gathered on stage last week in Ohio, do any have merch that’s stylish enough to stick around past the 2020 Democratic National Convention in Milwaukee? Is there a blue state version of Trump’s angry red MAGA hat waiting in the wings? And is there a slogan tee (or infant onesie or grilling apron) that’s a must-have collector’s item — even if the candidates themselves are not? Here’s our take on the fashion hits and misses of the 2020 Democratic candidates’ campaign merchandise.

Two candidates stand out for their stylish and symbolic use of color: South Bend. Ind., Mayor Pete Buttigieg and Sen. Kamala Harris of California. The former uses an extensive nine-color palette (explained in great detail at the campaign’s design toolkit page) that manages to be heavy on both warm neutral tones and symbolism. The color yellow, for example, is a nod to the flags of both Illinois and South Bend, and shades of gold and brown reference the family dogs. The result is a selection of merchandise that feels more autumnal than political, which means those “Boot Edge Edge” tees and totes could be round for along time.

The latter’s merchandise also incorporates the color yellow. Here it’s a symbolic nod to Shirley Chisholm, the first black woman elected to Congress, whose 1972 campaign for the White House used the color. For her own run, Harris pairs the hue with shades of purple, black and red. The stylish standouts here include a pullover hoodie with the words “historically black” printed in the arched logotype of college-branded apparel (a nod to her plan to invest $60 billion in historically black colleges and universities), and an illustrated purple-tinged portrait of the candidate by artist Tracie Ching (available on T-shirts and glossy posters) that may be the closest thing the current crop of Democrats have in tone and style to Shepard Fairey’s now-iconic portrait of Barack Obama.

FAST FASHION ON THE CAMPAIGN TRAIL

In the era of sustainability, the phrase “fast fashion” has become a dirty word. But on the campaign trail, the ability to quickly leverage meme-worthy moments not only helps fill the coffers, but also demonstrates a candidate’s ability to seize an opportunity — a skill voters need to know the next occupant of the Oval Office has. So far, three stand out from the rest.

Harris and her merchandise team set the bar in this department in the aftermath of the June 27 debate. In an exchange with Biden, Harris said: “There was a little girl in California who was part of the second class to integrate her public schools and she was bused to school every day, and that little girl was me.” A few hours later, a $29.99 “That Little Girl Was Me” T-shirt bearing a photo of the candidate as a young girl was available for preorder. It’s become her online shop’s second-best-selling T-shirt ranking between the “Kamala Harris for the People” tee at No. 1 and the rainbow-lettered “Kamala” Pride tee at No 3.

Former Congressman Beto O’Rourke has done the same thing — twice — once for the benefit of his campaign and once to benefit gun control organizations. “Hell yes we’re going to take your AR-15” (an applause line from the Sept. 12 debate) appears in red, white and blue letters on one slogan tee benefiting his campaign, and the line “This is F*cked Up” appears over and over again on another above the words “End gun violence now,” the repeated line uttered on Aug. 31 in the wake of a shooting in Texas. The shirt was posted online the next day, with proceeds benefiting Moms Demand Action and March For Our Lives.

Team Buttigeig took a page from the same playbook — albeit with a humorous twist — when, during a Sept. 23 rally in Elkander, Iowa, a bee flew up, landed on his necktie and refused to budge, prompting the candidate to quip “I guess I’m just that sweet.” By the next morning, a “Bee Like Pete” T-shirt — complete with a cartoon bee graphic — was available for purchase. According to a campaign representative, it proved to a brisk seller. (Way to build on the buzz, no?)

Unfortunately, when it comes to style these of-the-moment tees suffer from the same problem that plagues the rest of fast fashion: They have a super-short shelf and aren’t likely to be worn more than a few times. And, if they are, the references they make will have likely faded into obscurity.

Sure, Joe Biden has a thing for aviator-style sunglasses, but we’re not exactly sure how that makes the former vice president the right choice to be the leader of the free world (unless the future is going to be really, really bright). That makes the sunnies silhouette plastered across his campaign merchandise in threes (red, white and blue, naturally) on T-shirts, totes and iced-coffee tumblers a head-scratcher in the messaging — and style — department. Team Biden might have been hoping for a “Top Gun” vibe, but what they ended up with was “Ray-Ban clearance sale.”

The former Secretary of Housing and Urban Development, whose grandmother was born in Mexico, has made a point of accenting his heritage in his campaign — literally — by rendering the diacritical mark in his logo in a contrasting shade of blue. The emphasis on the acute accent (and his roots) carries thematically through the items offered in his online store

Of all the Democratic 2020 candidates, Rep. Tulsi Gabbard of Hawaii — an Iraq war veteran, the first Hindu and the first person born in American Samoa to be a member of Congress, had the greatest potential for serving up unique, festive campaign apparel that tapped into her unique backstory. Alas, the Tulsi2020 webstore

Although Mayor Pete’s cream-colored “Chasten for First Gentleman” T-shirt emblazoned with the grinning visage of the candidate’s husband gets our vote as a collectible tee we’re likely to see for a long time to come (and, like, forever if Buttigeig wins), it has more to do with Buttigieg making history as an openly gay candidate than it does with the shirt’s style or design.

Style-wise, it’s hard to see a logo as likely to live forever as Bernie Sanders’. (In full disclosure, I’m originally from Vermont and had the pleasure of being yelled at by Sanders during a fraternity party during his tenure as mayor of Burlington but have never owned a Bernie T-shirt.) That’s because in addition to being simple, straightforward and almost instantly identifiable, it’s got a proven track record, having trickled up to the fashion runway, inspiring Balenciaga’s creative director Demna Gvasalia to riff on the logo for the European luxury label’s fall 2017 men’s runway collection. Only time will tell if the senator from Vermont’s recent heart attack will eventually sideline his second bid for the White House, but the “Bernie-ciaga” moment proves that fashion-wise his bestselling logo tee is a collector’s winning ticket.

Billionaire California activist Tom Steyer, who joined the race in early July, isn’t the only Democratic candidate with a campaign-branded bandanna on offer (Harris has a purple, star-spangled one; Warren’s red paisley version bears the likeness of her dog Bailey), but the red, white and black tartan version he’s offering online might be the only one that could do double duty as an actually stylish accessory (as well as Webelo Scout neckerchief). It cleverly keys into the candidate’s penchant for plaid neckwear (according to a 2011 Forbes report, Steyer has eight versions of the red plaid tie in his dress-up rotation) which makes it both a sartorial signature and a subtle symbol of fiscal responsibility — and one that adds a dash of lumberjack swagger to boot.

Hats off to technology entrepreneur Andrew Yang, who has the only lid capable of going toe-to-toe — make that bill-to-bill — with the MAGA hat as far as longevity: the MATH hat. Given top billing at Yang’s website, the $35, four-panel, navy blue ball cap with MATH embroidered across the front is described there as “an essential item for any true Andrew Yang supporter. Celebrating numbers and facts is an essential part of our campaign.” According to a Yang campaign representative, the hat is a bestseller, with 32,000 sold to date at prices ranging from $35 to $75 generating $1.2 million, which represents 8% of campaign revenue. (How’s that for math?)

Yang has a two-part origin story for the lid (which gets top billing at his website), explaining that it’s both an acronym for “Make America Think Harder,” and a nod to the campaign-trail applause line where he describes himself as the opposite of Donald Trump — “an Asian man who likes math.” Yes it’s a brilliant piece of branding. Yes, it’s also the perpetuation of a stereotype. Even so, we expect to see the MATH ball cap atop heads for a long time to come.

If the 2020 Democratic nominee for president was picked solely on the strength of campaign merchandise offerings, Warren would win in a landslide. That’s because the senator from Massachusetts who has a plan to address every problem also seems to have a slogan tee for every torso and topic; women, students, big thinkers and the persistent of every persuasion and from every state in the nation (literally, since there’s a “Persist” T-shirt on offer for each state as well as Puerto Rico and the District of Columbia.)

Riffing on the meme-making phrase “Nevertheless she persisted” (uttered by Sen. Mitch McConnell about Warren, who famously refused to pipe down during Jeff Sessions’ 2017 attorney general confirmation hearings), the persistence-themed pieces include “pint-sized persister” infant onesies, “persist responsibly” pint glasses and “purr-sist” cat collars. (Another example of Team Warren’s bid for inclusivity: collars for both cats and dogs.) Persistence aside, it’s Warren’s penchant for plans that moves the most merch; the campaign’s most popular tees are the ones that state simply and emphatically: “Warren Has a Plan for That.”

Another genius stroke of branding comes by way of the curious pistachio hue sprinkled liberally throughout the offerings. Dubbed “Liberty green” by the campaign, it’s a not-so-subtle nod to the verdigris patina of another high-profile political woman — the Statue of Liberty.

Although author Marianne Williamson didn’t meet the requirements for the upcoming debate, she deserves a shout out for the single most stylish candidate portrait of the 2020 race. Done by world-renowned fashion illustrator and celebrity portrait artist David Downton (whose work has appeared in the pages of Vogue, Vanity Fair and Harper’s Bazaar, among others), the image appears on both T-shirts and campaign buttons on her campaign website. 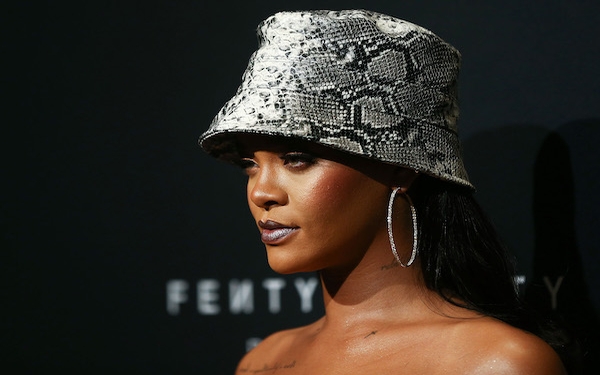 Fashion Focus
Rihanna is joining a luxury fashion house. But does Rihanna need luxe, or does luxe need Rihanna?
402 views 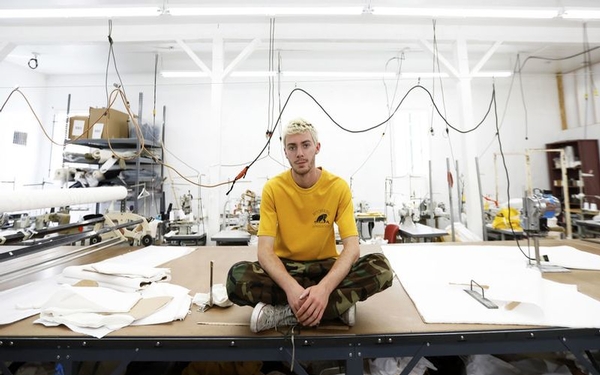 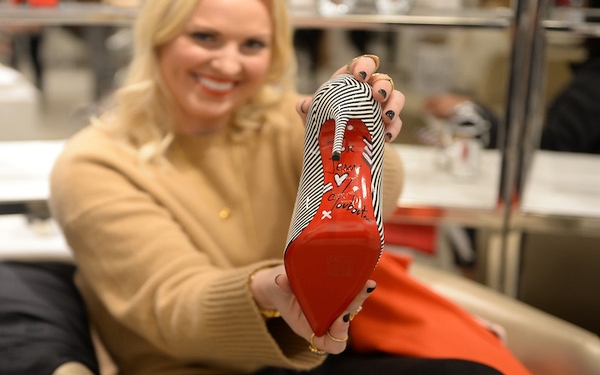 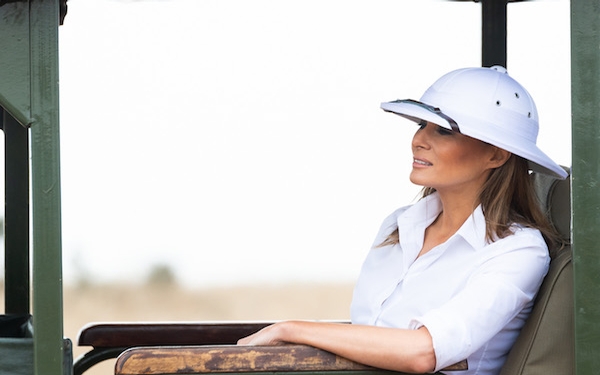 Fashion Focus
Why it matters that Melania Trump wore a pith helmet on her trip to Africa
4,770 views 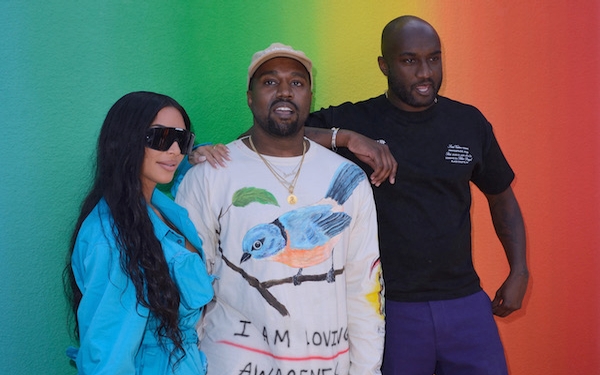