Gym Class Heroes: Having Fun in Spite of the Cruel Ones 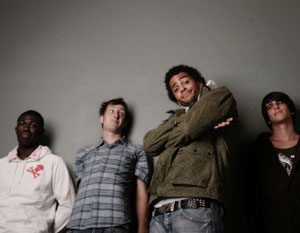 Take it from Gym Class Heroes’ Travis McCoy: driving and sleeping do not mix.

And he’s right; the band does have a lot to be happy for. Not only did Gym Class Heroes survive a major accident in New Mexico when its van and trailer flipped on its side, but the quartet could quite possibly be on the verge of full-blown exposure when its new release As Cruel As School Children hits stores.

For the New York hip-hop/pop punk outfit – rounded out by guitarist Disashi Lumumba-Kasongo, bassist Eric Roberts and drummer Matt McGinley – the past two years have been met playing venue after venue, with little rest in between.

It was in 2004 when the band hooked up with Fall Out Boy bassist/Decaydance label-head Pete Wentz. In February 2005, Gym Class released The Papercut Chronicles on Fueled by Ramen and quickly jumped on tour with pop-punk’s hottest act.

The record was met with acclaim in the pop-punk world, as the band traded in hip hop’s electronic beats for a live backing most comparable to the Roots. To cap it off, McCoy’s highly introspective lyrics about love, life and what it’s like to be a struggling twenty-something created a gritty undertone in a usually pristine genre.

“I think a lot of bands get caught up in making the same record over and over,” McCoy says. “Sometimes it works for them and the minute they do something different, kids are like ‘What’s goin’ on?’ I feel like kids never really knew what to expect from us so we took complete advantage of it.”

McCoy is right to an extent. With airplay on KIIS FM, “The Queen and I,” a seemingly happy song with a dark undertone about the wild side of party girls, will be the first time many get a taste of Gym Class Heroes. For those that are familiar with the band’s previous work though, a difference is immediately heard.

“The main factor in [The Papercut Chronicles sounding the way it does] is because we recorded [it] in three days with just an engineer. We were on a time schedule because we didn’t have a lot of money,” McCoy says. “This time around we did it over a period of three months, we got to nurture the songs and work them the best we could.”

The resulting School Children is the cleanest, most polished the band has ever been. Where Papercut is outright dark, gloomy and dirty, School Children gleams with upbeat melodies, punchy lyricism and Patrick Stump’s best Michael Jackson impression.

Don’t let the sound fool you though, deep under the surface lies a biting sarcasm and rich personal growth not always apparent in pop-punk music.

“[As Cruel As School Children] is basically a metaphor for the world in general and mostly the music industry. The music industry and the world have their lunch money bullies and everybody is dodging them, but at the same time, the lunch money bullies build character,” the frontman says of the album’s moniker. “We all know kids can be the cruelest and meanest motherfuckers on the planet but the minute that you don’t let the ridicule get to you, you’re invincible. When you fall for it, that’s when you’re fucked.”

Examining the record too much should be a no-no, McCoy warns, or else you’ll loose the band’s original purpose.

“Roll the fuckin’ windows down and listen to it,” he says. “I want them to laugh a little, cry a little and just enjoy life. If anything, I hope people just have fun.”

As Cruel as School Children will be available July 25. For more information, visit www.gymclassheroes.com.