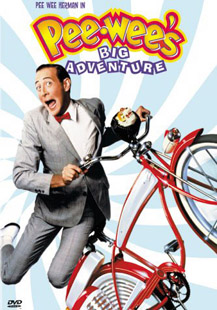 With a track record of super-imaginative films under his belt-including Beetlejuice, Edward Scissorhands, Big Fish and Charlie and the Chocolate Factory – and a big-screen version of “Sweeney Todd” currently in pre-production – what better time to revisit a Tim Burton classic?

And throughout this adventure, filled with a handful of mishaps, Pee Wee finds himself in a load of sticky situations. Whether he’s saving snakes from a burning pet store, exploring the basement of the Alamo, chatting with truck-driving ghost Large Marge or doing his now-trademark dance to the song “Tequila” in a biker-laden bar, Burton’s Big Adventure promises lots of big laughs and a story line with a bunch of fun twists. It’s a funny flick that guarantees to lift nearly anyone’s spirits.

Pee Wee’s Big Adventure will screen at midnight. The Nuart Theatre is located at 11272 Santa Monica Boulevard, just west of the 405 Freeway, in West Los Angeles. For more information on this or any of the Nuart’s other “Cine Insomnia” programs, call (310) 281-8223 or visit www.landmarktheatres.com.
Article posted on 7/18/2006
This article has been viewed 2753 times.