Anthem Rock Is Back: C24C 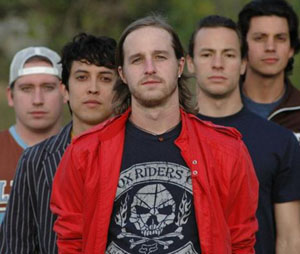 The show is packed. Both levels of the Key Club are teeming with screaming fans. The headlining band wraps up its set and the following band gears up to take the stage. By now the audience has started to thin and only half the crowd remain to see what will come up next. The lights illuminate the stage and a young jam band takes hold of the half-full club. Throughout its set kids trickle out and make their way home even though there’s still one band left to play.

By now the clock is nearing midnight and the jam has finally ended. The club is holding onto a quarter of its capacity and the final band of the night is putting their drum kit together when I notice something: the club is filling back up.

While searching for a set list or something for a hint as to who was about to take the stage, I find a beer soaked flyer stuck to the bottom of the floor.

C24C? Who the hell is that? What is that? All questions aside, I was about to find out.

The lights come on and the stage ignites with energy. The band breaks into a perfect rendition of "The Final Countdown." As the song wraps, the frontman flies to the center of the stage and the crowd goes nuts. Girls and guys jump up and down to the rock-ska-punk-like beat of the music. Smiles coat the faces of the fans who seem to have suddenly all become best friends.

Song after amazingly catchy song the club fills up even more and the energy grows. On stage the two guitarists trade glam rock poses and joke with the bassist, who's busy mocking the singer's face. The live show is in full effect. A percussionist and backup singer join the band and rock with the drummer and singer as they bounce around on the stage like kids.

The music, how do I describe it? It’s what rock should be. Singer Philip Douglas is overflowing with charisma and charm. His vocal range goes from hard rock to hip hop, carefully handling each lyric. The drums are tight, really tight. The mix of punk-ska-rock-hip hop demands it. Drummer Kevin Landry moves from deep in the pocket, attacking the beat from song to song in a smooth display of raw talent.

And the rest of the band flies all over the stage, further pushing the limits of C24C’s powerful live show. The choreographed moves toward the end of the set were the piece de resistance. I’ve never seen a bassist play while doing a summersault across the stage, but Mike Francis pulled it off with ease.

In between two of the last songs I ask a fan what the name of the band is about. She giggles and asks me, "Have you ever seen the TV show ‘Life Goes On?’ The one with the retarded kid?"

Pausing for a second I stop to think and reply cautiously, "Yeah. Why?"

The answer shocked me and made me laugh, and then after that made me feel bad for laughing.

The fan continues, "Well, the retarded kid on the show was named Corky. So the band is called Corky’s 24th chromosome."

It took me a second and then I laughed and then stopped and then looked at the stage and laughed again. That is single handedly one of the worst-best names for a band ever.

I took a long sip of my beer and watched the crowd scream for one more song. Douglas grabbed the mic and broke out into the catchiest, coolest rock song I’ve heard in years. It’s called the "Unicorn Song" and – my God – if it didn’t have everyone’s attention I would be shocked.

So, if you’re looking for the newest thing out there and are sick of the same old emo, screamo, Lo-Fi, retro-whatever, come out to C24C’s next show and prepare to be enlightened.

C24C will perform July 21 at the Roxy, in West Hollywood. For more information, visit www.c24c.com.