7 ways to upgrade your flight without paying full price 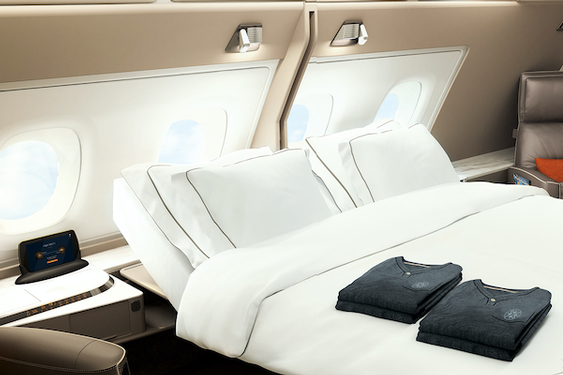 It’s about comfort, especially on long-haul flights. It’s about being able to shift position, with the push of a button or two, from sitting upright to a much more comfortable lie-flat position. That’s when my spine and posterior go “aaaah.”

But airborne comfort comes at a cost. So I’m going to tell you how to fly flat for less than you might imagine.

1. Buy a nonrefundable business or first-class fare when it’s low.

Airfares change moment to moment and day to day. Search for a Los Angeles to New York nonstop one-way in business class and the fare could be $499 one minute and $1,999 the next. It used to be that airlines gave away their premium seats as a perk for loyal customers, but now they prefer to get whatever the market will bear. I check multiple times as far in advance as possible and snag a deal when it appears. I’ve noticed recently that airline apps remember your last search so it’s as easy as hitting the search button again and again to see if fares have changed. Often, on domestic routes, nonrefundable business or first-class seats are just twice the cost of economy class rather than three or four times as much as they once were. As with nonrefundable economy class fares, you’ll pay $200 to change or cancel your flight.

2. Use miles/points to upgrade from economy

American, Delta and United let passengers use miles (15,000 to 20,000) plus a copay of $75, on lower-48 domestic routes, to upgrade from economy. Sometimes an upgrade is available immediately when you call the airline’s award desk, but usually you’ll be put on a waitlist. How far in advance you book, the price of the economy fare, and the time you check in for the flight may affect your chances. Upgrades on flights to Hawaii and international destinations will cost more miles and higher copays, and other airlines besides those mentioned also allow mileage upgrades.

3. Use miles or points to upgrade

As with airfares, the number of miles or points needed to book a frequent-flyer award seat will vary day-by-day. I recommend calling the awards desk rather than going online to search availability. Last year I was looking for business-class award seats on British Airways and found none online, but when I spoke to someone on the phone there were lots of options. That said, American was offering, on its app but not on its website, “online only” business and first-class awards at greatly reduced mileage, so it’s a good idea to try both methods. Check multiple times before committing.

If you have good credit but don’t have enough miles in your account, the fastest way to earn enough for a business-class ticket is to get a new credit card offering sign-up bonuses after you charge a specified amount to the card, usually $3,000 in the first three months after approval. Citibank, American Express and Chase typically award 50,000, 60,000 or more points or miles. British Airways has offered 100,000 points in the past.

But do us all a favor and apply for these cards directly with the issuing bank and not through websites that get millions in referral commissions since we consumers end up paying for these bounties in the form of higher interest rates and fees. In an attempt to circumvent those “points” websites, airlines are marketing credit cards onboard flights with added incentives not available online. On a recent American Airlines trip, the flight attendants handed out applications for a co-branded AA/Mastercard with no annual fee for the first year, and just a $1 minimum spend. Yes, I applied and got approved and used the miles for a free business-class trip.

Checking in online for an Alaska Airlines flight last year, I was offered a $50 upgrade to first class on a Seattle-to-Los Angeles flight. You’re darn right I took it. Waiting in line to board an Etihad Airways flight, I was approached by an agent who asked if I would like to upgrade from business to first class for $500. That one I didn’t take, but you get the point: be alert to, and ask about, last-minute upgrades. Do it when you check in at the airport. And don’t ignore emailed upgrade offers: American sends me these all the time, mostly on shorter domestic flights. TAP Air Portugal sells upgrades to business class at the ticket counter or gate for about $400 to $500 per flight, depending on load factors.

5. Buy through a consolidator

Consolidators are like the T.J. Maxx of business and first-class airfares. I’ve never used one, but my friend Ken did recently on a New York-to-London trip in business class for 50% less than Virgin Atlantic was asking online. Consolidators have been known to cease operations without warning, but one that’s been in the business for decades is Planet Amex (planetamex.com, no relation to American Express).

6. Bid on an upgrade through an auction

Four dozen carriers (Air New Zealand, Etihad, Fiji Airways, Hawaiian Airlines, Qantas, SAS and Singapore Airlines among them) offer upgrade auctions through PlusGrade.com. Check the site for the whole list, but you must bid on each airline’s site where you’ll see rules and procedures, with some allowing upgrade bids on award tickets and some offering instant upgrades as well as auctions. TAP Air Portugal runs auctions on flytap.com from 72 to 24 hours before departure and at Seatboost.com from 24 hours to flight closing,

7. Be loyal to one airline. Although some airlines give away fewer free seats in business and first class than in the past, passengers with higher status in frequent-flyer programs do get upgraded for free at times, and those folks also have higher priority on waiting lists for mileage upgrades.

Oh, and one other way: be nice, dress well. Time and time again, I’ve heard from friends and readers that they have been upgraded to business or first class simply because they made some effort to dress decently. It only happens occasionally, but what do you have to lose?

A British Airways employee whose job it is to escort VIP passengers confessed to me that, “Yes, we do take note of a passenger’s behavior and whether they’re presentable. When I was a check-in agent we would place a note in the comments section of the reservation: this person was very nice, consider available upgrade, or this person was very nasty.”

And several people I know have gotten Best Dressed Upgrades, most recently Susan Andrews, a real estate agent in L.A., on a flight to London on British Airways, an airline on which she had zero status. It’s just human nature. Airline employees are required to dress smart when flying nonrevenue and they disdain passengers who dress like slobs. I worked for Eastern Air Lines in the 1980s when it was company policy to fly employees in first-class if seats were available (back then, they almost always were). One day I showed up for a flight, in my best suit and good shoes, but no necktie, and was handed an economy-class boarding pass. When I asked why the gate agent scoffed, “Dressed like that you don’t deserve to fly at all!”

Travel
All of California’s national parks are open. Kind of. We can explain
351 views

Travel
Whether Travel is a Right or a Privilege, it Comes with Responsibilities, Travelers
313 views

Travel
Travel during the pandemic: 7 things you need to know
378 views