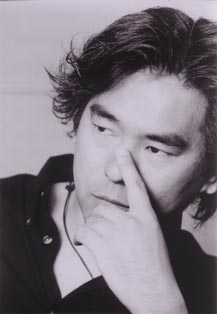 At first, Japanese director Rhyuhei Kitamura seems your typical L.A. 30-something – soft, yet well spoken; another fashionable and restrained auteur in pricey denim. Hardly the person one would have suspected to be at the helm of the soon to be released comic turned teenage assassin epic (and subject of our little talk), Azumi .

But get Kitamura going on any aspect of the movie making process, and he betrays quite another persona, one more suited to his film. Broach the right topic and gone is the polite adult, replaced by the giddy movie fan kid, laughing and convulsing in a dizzying and futile attempt at self containment. Case in point: I ask him about how much blood he used in Azumi and he answers back, his voice rising with his smile, “They [the studio] prepared a lot of blood, and I said ‘No. No.' Never enough!” a short fit of laughter ensues.

The boyish enthusiasm is palpable in the conception of Azumi, but it is the entirely adult follow through that makes it so impressive. The story centers around Azumi, the only female in a group of orphans turned assassins assigned the task of murdering troublesome warlords in 19th century Japan. Played by the innocent and achingly cute Aya Ueto, Azumi slashes people like Wal-Mart slashes prices, struggling with conflicts that arise when you're a teenage kill queen.

Along the way there are ninjas, samurai and roving bandits for young Azumi to worry about, but Kitamura has a particular affinity for oddball villains. “When you look at my other movies [such as 2001's Versus ], I just love bad guys, I always have the crazy characters,” he notes. Especially worth mentioning are Saru, the hairy faced monkey-ninja, and Bijomaru, a rose toting (and scene stealing) white-robed fop who kills with the grace and ease of a young Boy George.

There is not a major amount of gore exactly, but there is blood … lots of blood. Blood spraying, blood leaking, blood oozing, blood pooling – and probably blood bleeding somewhere in there too. This is the film that really kills Bill, setting a new standard for artful ultra violence.

Kitamura acknowledges his desire to push the limits, but at the same time sees the gritting as serving the film's conflict, “What I'm showing is killing, it's not like a video game. Azumi is not like a ‘Tomb Raider' character – she's not fighting evil forces, she's fighting people.”

It's Kitamura's refusal to back down from depicting the sticky complexities of assassin life that marks the movie as a change from typical Hollywood action fare. One of the first sequences depicts the group of ten teenage assassins cut down to five in a bloody rite. The scene is shocking and deeply affecting, and Kitamura had to fight to ensure its inclusion in the script.

For Kitamura, the scene cuts to the heart of the Azumi's conflict. “You can't say what is right or what is wrong. You don't go killing people because somebody tells you to do it. If you kill someone you have to decide.”

Azumi is a popcorn flick sure, but its themes of ambiguous morality and uncertain response in a time of national crisis ring a bit more true given the contemporary political climate. Yet As important as these issues are, when watching Azumi it is easy to get sidetracked from the weighty subtext. Why think politics when there's poisoned ninja darts to worry about?

With a pace of slash-and-stab action that will leave you breathless (if not bloodless), Azumi will please the spastic little gore hound poking around the animal part of your brain. The effort was monumental; Kitamura spent three months training with the cast before the film, and didn't even storyboard the lavishly badass fight scenes, preferring to work them out with the action coordinator on the set, wooden sword in hand.

The climactic battle where Azumi takes on an army of 200 took two weeks to film, but mention it to Kitamura and out comes the ecstatic movie fan yet again “Two weeks shooting; just killing and killing. Killing and blood and blood and blood. It was fun.” It's difficult not to agree with him.