Considering Kiteboarding?: The Sky’s the Limit 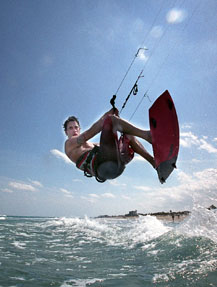 It’s 9 a.m. in Maui, Hawaii. The coffee is good, the wind is picking up and Flash Austin is chronicling his life and riffing on the gospel of kiteboarding.

“Then there was this street clown who made balloon characters on the pier in Daytona Beach, yah?”

It’s been nearly 10 years since Austin had his epiphany – witnessing a man using a power kite to drag his feet across the sand in Panama Beach, Fla. For a kid raised in Siesta Key, Fla., who had dreams of riding huge waves, that kite “was like my Excalibur.” After a test run left him “stoked,” Austin purchased the kite for $195 in one-dollar bills – “tip money, yah?” – and began his search to find the holy grail of water sports.

“So there was this kite guru in Maui named Joe Cool.”

Austin’s pursuit has not been in vain. Ten years of experimenting with kites and boards, 10 years of catching air and the attention of athletes from the worlds of wakeboarding, skateboarding and big-wave riding. Austin’s love of kiteboarding has spilled over to become the fastest-growing obsession across the water.

“This sport is where it’s at,” said Best, squinting across the water one Saturday morning at dozens of kiteboarders competing in the Islamorada Invitational in the Florida Keys.

Less than a half-mile offshore, the kiteboarders, many using equipment bearing Best’s name, race across the flat ocean hitting speeds of 30 mph. Then, one by one, they take turns catapulting 30 feet into the air as if on jet packs while spinning and flipping their bodies like trapeze artists before returning to the sea.

These are “the seeds that we have sowed and watched blow up,” said Austin of a sport invented in the mid-1980s in France by brothers Bruno and Dominique Legaignoux. It’s a sport that has grown from a handful of companies selling 250 kites worldwide in 1998 to one with more than 50 companies cranking out close to 70,000 kites last year.

“It’s an emotion,” said the passionate Austin, who punctuates his sentences with “yah?” “It’s the adrenaline. The excitement. The thrill. To catch 25-foot air and do a double handle pass and land? It’s like popcorn. Pow! Pow! Pow! Yah?

Think of windsurfing while skateboarding in the sky. The rush is supplied by inflatable nylon kites that, depending on body weight and wind conditions, can measure three to 21 square meters and are tethered by four 100-foot lines to participants on five-foot miniboards. Unlike windsurfing or wakeboarding, however, the board fits in the back of your car and the kite folds into a backpack.

“It’s exactly like wakeboarding except instead of having a boat or cable determining where I’m going, I’m everything,” Best said. “I can go wherever I want and I can jump bigger and go faster.”

Best looks out at a horizon filled with kites. “Can you imagine the rush of doing this in 30-foot waves? In a nuking wind?”

Austin can imagine it because he’s done it. His obsession with kiteboarding is legendary. It wasn’t enough to purchase that first kite back in Panama Beach, but Austin had to jump on his skimboard and drag himself down the beach “like a skipping stone” to the delight of cheering tourists. And because there was no way to skim upwind, he took a taxi 15 miles in the other direction to kite-skim back down.

“I felt something was missing in my life,” he recalls. “I lived in Florida and it was beautiful, but it was what I call `serene monotony.’ I wanted hurricanes and storms.”

He moved to Daytona, Fla., and “stepped things up a notch,” getting a seven-square meter kite which enabled him to get more height. “I remember these places having wet T-shirt contests on the beach and I’d go flying by on my kite and the kids would rush the deck and scream. I was the only guy on the water with a kite and board.”

Austin says a series of chance meetings led him to Maui and more experimentation in helping to refine the sport, including meeting a clown in Daytona who invited him to Maui and meeting kite guru Joe Cool upon his arrival on the island. In Maui, he hooked up with kiteboarding pioneers like Lou Wainman and Elliot Leboe as well as converts like eight-time windsurfing champion Robbie Naish and big-wave windsurfer Chuck Patterson.

“Flash was the first rock star of the sport,” said Ryan Riccitelli, editor of Kiteboarding Magazine USA. “He set the pace. He gets major credit for advancing the sport. He was the first to travel the world and make big money.”

He was also the first to kiteboard 70 miles across the North Sea from Norway to Denmark. And his travels everywhere from Egypt to Brazil have made him a hero in some parts of the world, a case illustrated by his chance meeting in an airport in Spain with a Russian fan. “You’re Flash Austin. Here, take my watch.”

If Austin gets credit for advancing the sport through its infancy, Best gets credit for making it more affordable through bestkiteboarding.com, a Delray Beach, Fla.-based company he founded with Alex Shogren that sells kites and boards over the Internet.

For Best, the cable wakeboarding champion of 2000, taking risks is nothing new. In 1991, while working in a hothouse studying to be a horticulturist in his native Queensland, Australia, he quit his job three days after trying wakeboarding. “I had a nice job, a car, an office ... but eight months after picking up that wakeboard I won my first tournament and after that I moved to (South Florida) so I could wakeboard.”

But within a few weeks of being introduced to the sport while on a trip to Maui, “I was sold,” Best added.

“I was like, ‘This is it. I don’t want to wakeboard anymore. I’m out of here.’ I packed all my bags, rang up my sponsors, gave back all my boards and said, ‘I’m going to be a professional kiteboarder.’”

Best and Shogren believe the potenial of kiteboarding “is limitless” because of the crossover potential from athletes in other sports.

They are also on a mission to start a nationally sponsored tour and become part of the Action Sports Tour, a challenger to ESPN’s X Games being launched by NBC and Clear Channel.

For Austin, the sport’s growth is what “we thought could happen.”

“Somewhere in the melting pot of windsurfing and snowboarding ... it all combined the last year,” he said. “We’ve only seen the beginning of where kiting is going, yah? My battle cry the last four years was that this would be the greatest sport in the world.”

Austin hopes younger participants retain the “innocent attitude” he had when he first began experimenting with kites in Florida.

Because “you know, for me, the main thing I wanted was to catch waves and air, yah?”