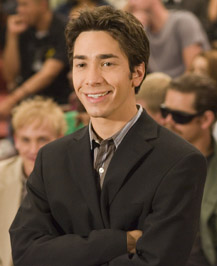 Strolling into Comic-Con with his fellow cast members from Accepted— Lewis Black, Blake Lively and Jonah Hill— Justin Long could easily blend into the crowd of sci-fi enthusiasts and comic book collectors. Wearing a simple gray T-shirt and blue jeans, the up-and-coming comedic actor starts joking the minute the tape recorders roll. Asked to speak his name into the mic he deepens his voice and croons, “Antonio Banderas.”

Long's dry humor and boyish good looks have largely gone unnoticed, but a string of 30-second ads for Apple Computer and his first leading role in a studio-backed feature just may change all that.

As Bartleby Gaines — a high school senior who fails to get into college and decides to make up his own to avoid disappointing his parents— Long, 28, is in nearly every scene of the Universal release, Accepted. To prepare for his first lead role, Long turned to actor Sam Rockwell for advice. The two appeared in Galaxy Quest, which was Long’s first movie, and have remained good friends ever since.

"Sams like an older brother," says Long, who wasn’t expecting to hear the advice Rockwell had to give him: to get a lot of sleep and approach the experience like he was running a marathon. “I kind of neglected it and a week into [filming] I got severely sick,” Long says. “It was like running a marathon [and] what hit me right away is how physically demanding it was. It was an all-inclusive job for me.”

At one point during filming Long nearly passed out. The scene involved him getting up on stage to do a cover of the Ramones‚ "Blitzkrieg Bop" in front of an auditorium full of drunk college students. His reaction dampened any desires he had to become a rock star.

"The first time we shot the song I honestly thought I was going to collapse. It was the least rock 'n’ roll reaction I could have had. The make-up ladies came over with Pedialyte and I started sipping it out of a straw and getting fanned."

After Galaxy Quest Long appeared in a couple more films like Jeepers Creepers before landing a recurring role on the NBC show, “Ed.” He played Warren Cheswick, an easy-going high school student who wasn’t quite popular or a social outcast, but fell somewhere in-between. The character was similar to Bartleby Gaines, who Long says he modeled somewhere between Michael J. Fox and Vince Vaughn.

Long also found himself doing a lot of rat-a-tat-tat, machine-gun style talking, which reminded him a lot of Vaughn.

“I’ve been around Vince a lot [and] I felt myself channeling his style of speaking. I watch myself [in the movie] and I feel like I see some watered down Vince-isms. Just how he is naturally I found myself doing a lot of that,” Long says.

Regarding working with Vaughn on Dodgeball and The Break-Up, Long has this to say: “There’s nothing more flattering than somebody that you look up to, and whose career you aspire to have, and whose talent you admire, accept you in that way.”

Surprisingly it’s not Long’s roles in Vaughn’s movies or in indie flicks like Waiting that are raising his public profile, but a series of 30-second ads for Apple Computer. In the ads, Long personifies a Mac with his casual attire and laid-back attitude while actor John Hodgman of “The Daily Show” is the impersonal PC. The “Get a Mac” campaign has been widely popular and Long says nine out of 10 people who approach him recognize him from the commercials.

“If ever I had any arrogance or delusions about being a movie actor I’ve swiftly been brought back to earth with the constant recognition of being in a commercial,” Long says.

Before launching his acting career, Long attended Vassar College. “I didn’t think acting was a viable career, but that was the only thing I loved doing. My dad was a philosophy teacher and my mom was an actress. You can’t really make a lot of money doing either one, [so] they encouraged me to do something that was a lot more practical. I ended up dropping out of school because I felt like there was nothing else I was good at or able to do [besides acting].”

Long feels his four years on “Ed” more than made up for the education he missed at Vassar College. “That show was such a perfect beginning for me. It was almost like a film acting school [because it was a low profile show]. I was so new to the business and I learned so much in those four years. It was a great training ground.”

Long thinks the show being under the radar was good for his career. "It wasn't so popular that it locked any one of us into any one of those particular roles. I feel like we were all free to go on from that.

The roles Long has taken since “Ed” seem to support his theory since nobody would confuse the long-haired gallery assistant he plays in The Break-Up with Warren Cheswick.

He changed his appearance as well for the upcoming The Sasquatch Dumpling Gang, which will roll into theaters this fall. Long sports a mullet, moustache and goatee for the comedy, which won the Audience Award at Slamdance. “I’m really proud of it and my performance. I don’t get tired of watching it. I’ve seen it six or seven times,” says Long, who won his first award for Best Actor at the U.S. Comedy Arts Festival in Aspen, Colo. for the role.

Now that he’s racking up awards and feeling the power of a studio marketing machine for Accepted, is Long ready to take Hollywood by storm?

“If I’ve learned one thing in the last eight years in this business it’s been to not put stock in anything in terms of one’s career and what’s going to happen. The fact that these jobs have been a bit more high profile than any other jobs I’ve had will just allow me to do more work. I have no delusions of grandeur. I know the reality of the business. I just hope that I last as long as I can.”