From my coronavirus quarantine, a love letter to video games 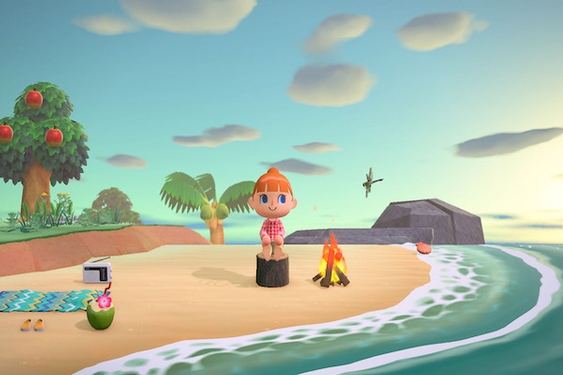 In "Animal Crossing: New Horizons" the outside world is full of wonder. (Nintendo)

My favorite childhood bedtime stories were not “Charlotte’s Web” or “The Hobbit.” No, my most treasured nighttime texts were “King’s Quest” and “The Secret of Monkey Island.”

Guybrush Threepwood, the hero of “Monkey Island,” would never be mistaken for a creation of Robert Louis Stevenson, but he was perhaps the first pirate to come equipped with a rubber chicken — a rubber chicken that could be used with an aerial cable as a sort of makeshift zip line. It was an early lesson in looking at every object that surrounds us as an item of potential discovery.

Of course, “King’s Quest” and “The Secret of Monkey Island” are not books at all. They’re early attempts at merging storytelling, animation-worthy visuals and gameplay. So yes, they’re games. But even today, when games are arguably the largest entertainment medium and the industry best-equipped for a stay-inside, work-from-home lifestyle, that word carries a stigma, a symbol of a childish medium not on par with the literature of books or the authorship of cinema.

Sometimes when I mention this as an adult, I receive a look of sadness. Shouldn’t, says someone’s quick glance to the floor, your parents have been encouraging books or reading to you instead of sitting with you in front of a monitor?

Sure, they did that too, but I just talk about that less.

Games are a playground, a place to see what happens when we do what we aren’t told, and a world in which failure is embraced — welcomed, even — as a way to learn. I won’t say “Dungeons & Dragons” is Shakespeare, but that doesn’t mean it can’t be a formative text.

In fact, the defining stories of my life were interactive ones. So much so that since childhood I’ve been chasing the high and the joy of play. Play has shaped all of my interests, from theater to punk rock to theme parks, all of which have elements of make-believe and idealism as well as an anyone-can-take-part ethos. And of late, drowned in the stress of life in 2020 and the fear of contracting a vicious virus while living half a country away from all my family and loved ones, play has provided not just comfort but a sense of normalcy.

More important, at a time in which my mind is restless and unable to avoid drifting to a negative space, games have given me the only sort of engagement capable of keeping me occupied. New releases just this month, including “Animal Crossing: New Horizons,” “Doom Eternal” and “Ori and the Will of the Wisps,” all drastically different, have provided various forms of self-care.

“Animal Crossing” offers stability, a place to check in daily and complete simple tasks, while “Ori and the Will of the Wisps” is a modern fairy tale that allows one to power through fear. “Doom Eternal,” which may be full of grotesque demons and cartoonish violence, is the requisite hero’s journey/power fantasy, only its brazenly complex level design keeps me leaning forward to figure out how to navigate the world.

I’ve tried, every night since March 20, to watch the movie “Onward,” which Disney released for purchase after it became clear we wouldn’t be gathering in movie theaters anytime soon, but I can’t get past five or 10 minutes without wanting to text a friend or a family member, or reread that article on symptoms of COVID-19 or triple-check if it’s OK for me to hug my cat (I’ve been told it is — for now). While I have long believed that all art requires a form of interactivity, be it attempting to connect with an artist’s vision or the ability to activate our own imagination, in times of high anxiety what I need to regain a sense of peace is to actively participate — to play.

I cringe any time I see the words “escapism” or “frivolity” associated with games and play. I’m not the only one.

“This concept that games are only for children is a very Western attitude that I find very unusual,” says Marientina Gotsis, director of USC’s Creative Media & Behavioral Health Center. Gotsis was raised in Greece, “where play is very pervasive for all ages,” and increasingly has been looking at games from an archaeological perspective, noting that wherever mammals have lived, there is evidence of gameplay.

“We have a tendency too much in the West to package and productize certain things,” says Gotis. “That loses the essence of why we do certain things. We over-explain so that we can extract something and package it and sell it. As materialistic as games can be, the interaction design, and the subjective experience that emerges from play, can’t be put in a box. You have to be there for it.”

Talking to Gotis helped me get to the bottom of why I so often turn to games, especially in moments that I’m down or alone, either by choice or by circumstances. Late last year it was “Death Stranding,” a work of interactive fiction from Hideo Kojima, that helped me through a rough personal spot. While the game now can be seen as prescient, what with a sometimes invisible threat haunting the world, forcing everyone to stay isolated in bunker-like communities, the game’s patient pace, and the need to finish the work of anonymous strangers in reconnecting society, became a balm.

Back in 2009, just as I was turning 30 and was stricken with early-stage melanoma, I essentially locked myself away from others, aside from a few close friends. Conversations with real-life humans often went somewhere I didn’t want them to go, so I replayed “The Secret of Monkey Island.” My adult brain had a tougher time with some of the nonsensical puzzles that my anything-goes child mind cherished, but it was still a humorous soap opera that allowed me to wander, explore and talk to digital creations to try and figure out ways to get them to do what I needed.

If you could get out of the boat on Disneyland’s Pirates of the Caribbean and role-play, it would be sort of like “Monkey Island.”

And thus, more than providing a sense of goals or tasks, games demand that I be fully present. Much has already been written about the potential social aspects of games, and in the last week alone social media has been filled with images of players sharing fruit and bugs with one another in the latest “Animal Crossing” (it makes sense in the game, don’t worry about it). But games also provide a kind of illusion of social interaction, a living-it-as-it-happens sensation that’s present even when playing alone.

Whether it’s “Death Stranding,” the latest in the “Super Mario Bros.” series or even a highly literate work such as “Astrologaster,” a comedic tale about astrology and Shakespearean-era plague that can be played with no game knowledge, whatever happens in a game exists as a moment, one that, even in strictly narrative-driven games, likely won’t be repeated exactly as it just occurred. Like live music or live theater, we have just participated in an experience.

I sometimes joke that I’m out of step, pop-culturally speaking, with most of my peers. Playing games and writing about them doesn’t allow me much time to take in many movies or a full television series. But I’ve never felt as if I’m missing something or am out of touch. Many of today’s best games, with winding narratives that allow us to explore various characters from differing points of view, are relatively akin to modern television.

They are also just as topical.

“Mutazione,” for instance, a game about family, traditions and healing the earth, rewards only if we take the time to get to know each and every of the game’s lovingly crafting weirdos. While there’s an underlying theme of climate change, there’s also personal drama and family histories to discover. Though leading to one conclusion, “there’s a great deal of choice into which A, B and C plot you dig deeper down into, and who you make deeper connections with, and how much of the complex and thoroughly plotted history you uncover,” said Hannah Nicklin, one of the game’s lead designers, during a recent talk as part of this year’s online-only Game Developers Conference.

Like an ensemble television series, we get to know a world and its inhabitants (among the primary influences cited by Nicklin was “Star Trek: Deep Space Nine”). But we also lean in, and decide whose stories we explore most, or how we respond to them. The early adventure games I played with my father — “The Secret of Monkey Island,” “King’s Quest” — were far more linear and also loaded with some rather obtuse puzzles, but the underlying framework was there. We don’t watch a world or even connect with one; we play it like an instrument, attempting to unwrap the hidden tunes laid out by developers.

Games then were not just a way to learn about people and life, but a way to practice at understanding both.

Or, in the words of USC’s Gotis, play is “a way to rehearse emotions, and to learn how to do things. If nothing else, play is a way to test yourself and see what you can do. We certainly need more of that in younger ages, but you need it pervasively in order to survive. There’s an evolutionary need for it, and an existential need for it, and people are discovering the value of it right now.”

Todd Martens joined the Los Angeles Times in 2007 and covers a mix of interactive entertainment (video games) and pop music.