Barbie Envy: Embracing the Body You Have 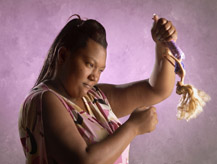 Remember how Mom used to say, „You‚re beautiful on the inside?‰ She might have had something there. Most of us go through life singing some version of "The Bad Body Blues" (my ankles are too thick, my arms are too skinny, I feel fat!) and being way too hung up on body image.

No matter our size, it‚s tough not to sing that song, says Beth McGilley, a psychologist who specializes in eating disorders, trauma and working with athletes: "We are a size-ist culture."

And yet, some of us have made peace with our bodies.

The people who‚ve done it make an impression on us: We all know the too-fat or too-skinny Plain Jane who draws everyone to her, like moths to a flame. Conversely, the most „beautiful‰ woman in the world may be lonely and insecure.

That‚s because „body image is directly related to self-esteem, not attractiveness,‰ says McGilley. „When you‚re in the presence of somebody who feels whole, you know it.

Is it easy to improve your body image? No.

Is it possible to improve your body image? Most definitely.

Take a look at Tandra Crosby. Her nickname was „Board‰ until she was a junior in high school. Since then, she‚s been a size 14 to 18. Five years ago, she says, she was selected to go to a workshop in Chicago with the Ford Models‚ plus-size division. She put the opportunity on hold when she found out she was pregnant.

Crosby, 26, says the experience helped her with her body image, because the Ford people told her that the average American woman is a plus-size. As she started paying attention to women around her, she realized that many were wearing fashions she had considered inappropriate for her size ˆ and were doing so comfortably. That boosted her confidence, and now (insert „she says‰, „I look good no matter what I wear.

She doesn‚t obsess about diet and exercise but does try to eat healthy foods. "You're not going to catch me walking around with a thing of crackers and water,‰ she jokes. „If you catch me doing that, you‚d better check me for a fever."
Article posted on 7/31/2006
This article has been viewed 1217 times.