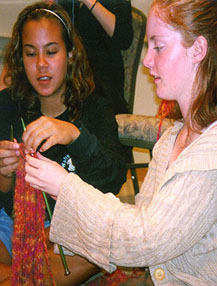 After Sarah Asher Morris began knitting about three years ago, she got a dose of teasing. People would say things like, “I thought only grandmothers did that!”

Now a junior at the University of Oregon, Morris often sees students knitting during lectures. A new knitting group has formed in one of the dorms, she said; another meets in the student union. The two knitting classes at the craft center on campus fill up so quickly, people who want to learn have to knit must turn elsewhere, such as the University Students Fibers Guild of which Morris is co-president.

“People want something so that they can pull away from whatever they’re doing just for an hour, instead of (doing) yoga or something else,” Morris said. “... It’s meditative. It’s relaxing.”

The University of Oregon is among schools nationwide where knitting clubs are blossoming as many college-aged women, as well as an increasing number of men, are taking up the ancient craft. According to a survey done for the Craft Yarn Council of America, the percentage of women younger than 45 who knit doubled in recent years, going from 9 to 18 percent between 2000 and 2002, the most recent year for which data is available.

Since then, knitting has become even more popular among young people, giving a boost to the business, said Mary Colucci, the yarn council’s executive director. She estimates yarn vendors have seen yarn sales grow by double-digit percentages in the last two years.

“I know publishers have added more knitting and crocheting titles because the demand is there,” Colucci said. “... I know from retailers around the country, a lot of them have added more and more (knitting) classes – and some shops, they fill up their classes so quickly, people have to wait to get in.”

Lisa Meyers, owner of Rosie’s Yarn Cellar in Philadelphia, said college-aged students make up about 20 percent of her customer base; it was only 5 percent when she opened her shop nine years ago. Now she’s getting calls from resident assistants at area colleges who want her to organize knitting sessions in dormitories.

“People think this is an industry where you’re going to be dealing with people with hearing aids all day long,” Meyers said. “Not at all.”

Knitters are eager to explain the hobby’s appeal. Sure, it’s cheap and portable – many said they take their knitting to class to help them stay awake – and it’s a great source of cheap gifts for friends and family. But for many, the true appeal lies in the repetitive motion itself, which they use to escape stress, or at least keep their hands busy.

“Last semester I knitted a lot and it helped me stop biting my nails,” said Elissa Washuta, a sophomore at the University of Maryland. “Then I stopped, and I started biting my nails again.”

But none of this is news; the gentle clack of knitting needles has been around for thousands of years. What’s changing is the knitting industry, which has been stocking stores with funky yarns and trendy patterns to draw adventurous young knitters.

“It’s not such an old lady frumpy sweater thing,” said Emily Powell, a junior at the University of Maryland.

Powell, who enjoys making matching hats and mittens, said even those who make fun of her hobby end up appreciating the results.

“A lot of times they laugh, but then they think it’s pretty cool when I stay warm in the winter due to my cool knitted things,” she said.

“You hear, ‘Wow, why weren’t these yarns around?’” Colucci said. “I think we’ve all experienced kind of those really heavy handmade things. It’s not that way anymore.”

The result, combined with new larger needles that speed the knitting process and patterns that keep pace with fashion, appeals to those who grew up on fluffy store-bought knits.

Men are getting in on this traditionally woman’s activity more than ever before. At a recent knitting club meeting at the University of Maryland, four of the 20 attendees were men. One was sophomore Mat Lewis, a club regular who began learning to knit about a year ago.

“A lot of punk rock guys I know knit, because it’s a fun thing to do, and they like to switch up gender roles,” Lewis said.

A number of male knitters have showed up at the University of Oregon as well, said University Student Fibers Guild co-president Morris. Many had already learned knitting from a family member or a class.

“It’s something that’s becoming acceptable for all,” Morris said.

“With the new patterns and new types of yarns and more textures, it’s become more fun to do,” Powell said. “It’s a fashion statement.”

The result is that more women and men are finding themselves less dependent on the inventory of their local department store.

“I’m obsessed with (BBC television show) ‘Dr. Who’ and (show actor) Tom Baker,” said Sarah McKisson, University of Maryland sophomore. “He has a really awesome scarf that you can’t buy anywhere, but I found a pattern for it to knit!”

Six months and at least six skeins of wool later, McKisson has a multicolored scarf that’s twice as long as she is tall. Now she has moved on to other knitting projects, using her new skills to knit gifts for friends and family.

The slow pace of knitting projects sets the activity apart from other pursuits, said Lizzy Malouf, president of the University of Maryland’s knitting club. In a world where spending hours to make a present for a friend has become a rarity, people have greater appreciation for these homemade gifts.

“It stands out and it shows that you spent a lot of time on it, and time is something that no one has anymore,” Malouf said.

Daina Klimanis is a senior majoring in journalism at the University of Maryland and an intern for KRT Campus.