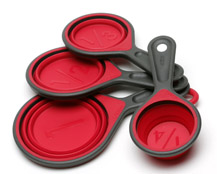 By some peoples‚ standards, my kitchen is shockingly small. They're dumbfounded when they see it for the first time, expressing their surprise that a food editor would have such a small workspace.

I love my kitchen. It‚s just two quick steps from stove to sink, sink to refrigerator, and refrigerator to stove. That's the magic work "triangle" that kitchen designers tout. It means less wasted time and energy. It works beautifully because although the floor space is small, I have roomy countertops and plenty of storage area.

Besides, a lot of fabulous cooks have much punier kitchens. Getting rid of the clutter though is essential, according to Justin Spring, author of The Itty Bitty Kitchen Handbook, a guide that addresses the challenges of organizing, maintaining and cooking in a tight space.

Spring says that to make cooking more pleasurable, he committed himself to cleaning out and reorganizing his diminutive 45-square-foot kitchen. That meant his grandmother‚s 1940s crystal had to go. Ten-year-old cans of pineapple chunks had to go. Even the precious $400 gelato machine that he bought for 20 bucks at a garage sale was kaput.

Without any fancy remodel, he changed the space from frustrating to functional.

"For me, the real secret is Œde-cluttering‚ and cleaning, to be able to move and function in a tight space," Spring says. "So many people think that we can get away with jamming stuff in cupboards and drawers, but if you have to move three plates in order to get one platter, that‚s a great waste of motion and energy. And there‚s a sense of hopelessness. It's not about making it pretty; it‚s about getting the work done. A kitchen isn‚t a storage area for stuff. Clear the decks and get going is the idea."

He explains that the kitchen is really for storing ingredients and a limited number of dishes, glasses and implements.

Having someone assist you, Spring says, is helpful in your efforts to de-clutter your kitchen. He says that if you‚re willing to pay anywhere from $50 to $200 an hour, you can employ a professional organizer (through the National Association of Professional Organizers, www.napo.net). For a cheaper alternative, simply ask a well-organized friend to stand in for that costly consultant.

Agree with your friend on a set number of work hours (he advises that four hours is about as much as most people can take). Then put out five boxes, "labeling them as follows: "put away (kitchen)"„put away (elsewhere),""give away/sell,""storage" and "trash." It's your friend‚s job to keep you from putting huge amounts of stuff into the put-away-kitchen box. Remember, „you are not so much getting rid of stuff as making room to live.

Once the purging is complete, he recommends a thorough cleaning of your kitchen, from top to bottom, followed by a look at which appliances to keep and which to ditch.

The author includes lists of basic utensils, pots and pans that he feels are cooking essentials, as well as a list of „kitchen space hogs‰ that he suggests get the boot.

According to him, salad spinners, freestanding colanders, large pasta pots and espresso machines take up too much room, and besides, with a little ingenuity you can substitute basic equipment in your kitchen to do the same job. As for limited storage space for ingredients, the author says it‚s a blessing.

„You will need to market more frequently for smaller quantities," he writes. "Your food will always be much fresher and more carefully considered. It also means that marketing will become an increasingly interesting part of your everyday life ˆ just as it is in all those films and books about living beautifully in the south of France.