California sets record for most coronavirus cases in a single day 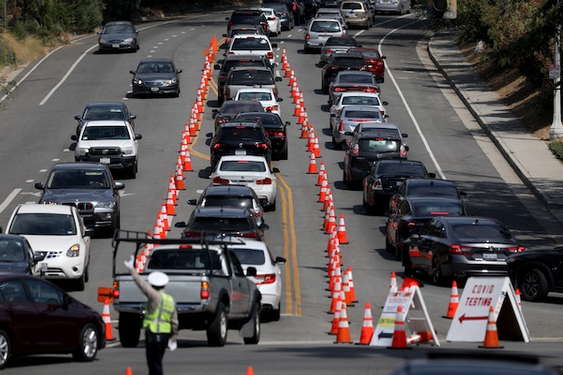 People wait in line to have a Covid-19 screening administered
(Credit: Gary Coronado)

The coronavirus outbreak continued to worsen in California this week, with 9,500 infections recorded on Tuesday — the most new cases reported in a single day since the pandemic began — and triple-digit fatalities that sent the statewide death toll past 6,500.

California cases are on pace to double every 24.8 days, a number that is used by experts to measure how quickly the virus is spreading. As of Wednesday morning, the state had 284,138 coronavirus cases.

Over the last week, California has had an average of 7,403 new coronavirus infections and 69.6 new deaths per day, according to data from the Los Angeles Times’ tracker. With cases continuing to climb and hospitalization numbers increasing, counties across the state have been forced to roll back business reopenings in an effort to stem the spread of the virus.

San Francisco officials this week opted to delay loosening restrictions on businesses, including indoor dining at restaurants, which were scheduled to resume next week. The city previously had suspended the reopening of hair salons, zoos, museums and outdoor bars.

San Francisco County had reported 4,020 recorded cases of the coronavirus and 50 deaths as of Wednesday morning.

“We know the pause on reopening is disappointing, but we cannot risk letting the virus get out of control,” San Francisco Mayor London Breed said. “We all need to do our part by wearing face coverings, keeping your distance from others, and getting tested so we can get to a place where we can safely resume reopening.”

L.A. County Public Health Director Barbara Ferrer said this week that people fed up with the stay-at-home order who have tried to return to a pre-pandemic way of life have contributed to the increased spread of the disease in Southern California.

“It’s clear that after months of quarantine, combined with the reopening of many sectors in the span of several weeks, we’ve had a lot of people disregard the very practices that allowed us to slow the spread,” Ferrer said. “Our inability to follow the most basic infection control and distancing directives leads to serious illness, and even the death of the people we love.”

Health officials attributed Tuesday’s daily spike to a backlog of roughly 2,000 tests between July 2 and July 5. However, officials also noted that the seven-day average for the county’s daily positivity rate — those who test positive for the virus — has climbed to 11.6%. A day earlier, it was just below 10%.

Orange County, which has the third-highest number of coronavirus cases in the state and the fourth most deaths, is also grappling with a surge in infections and hospitalizations in recent weeks.

The county’s positivity rate, which health officials use to gauge whether case numbers are increasing because of more testing or because there’s more disease spreading within the community, was under 8% over a seven-day period in mid-May. As of Tuesday, the county had a case rate of 222 per 100,000 residents and a positive test rate of 14.2%, according to county health data.

The state has set a desired standard average of 25 positive cases per 100,000 over a 14-day period and a seven-day average positive test rate of 8%.

The surge in new cases and the recent rollback of business reopenings prompted Orange County Supervisor Michelle Steel, who has repeatedly questioned the county health officer’s decision to mandate masks, to appeal to residents to wear a face covering.

“This is of the utmost importance to protect your health and the health of others, so that we can return back to normal as quickly as possible,” she said in a statement.

A new projection by the University of Washington’s Institute for Health Metrics and Evaluation said California could see a cumulative death toll of about 16,800 by Nov. 1 — an increase of more than 150% over the state’s current fatalities.

However, the projection notes that death numbers could be dramatically lower if 95% of California residents always wore a mask in public. In a universal masking scenario, California may see only about 12,000 deaths, the data show.

Gov. Gavin Newsom on Wednesday again urged Californians to take personal responsibility in slowing the spread of the virus by wearing masks, practicing physical distancing when possible and through frequent handwashing.

He noted that “hundreds of people across this country are dying on a daily basis because of this disease.”

“I hope all of us are sober about that and cognizant of the moment we’re in and the vulnerability that everyone has in this moment,” he said. He added that while conditions will eventually improve, the question remains unanswered about how long it will take to get there.

“That’s determined by how we conduct ourselves and how we behave,” he said.

US News
Juneteenth is now a federal holiday, as Biden signs bill
121 views

US News
Calif. lawmakers pressure Newsom to ‘step up’ on racism as a public health issue
122 views

US News
Is sex addiction really a thing? Science is skeptical
614 views

US News
A winter surge in COVID-19 cases seems inevitable. Can we stop it?
530 views