Amid calls for racial justice, first-time youth activists rise to the front 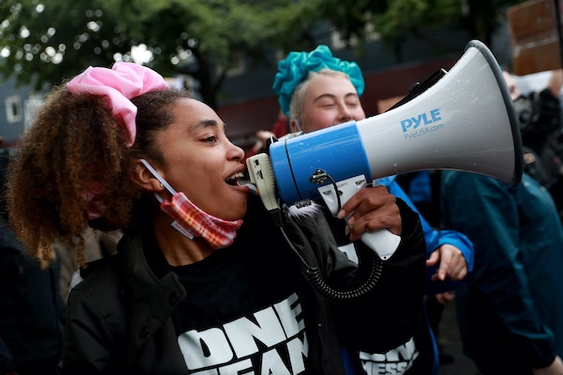 When a commotion erupted in the center of the Capitol Hill Organized Protest (CHOP) on Juneteenth, Katie Neuner began rattling off tidbits about the day’s historical significance through her megaphone.

Protesters corralled a man opposed to the occupation who yelled at demonstrators as he stomped through Pine Street and Cal Anderson Park in combat boots and a Jesus Saves T-shirt. As the tension increased, Neuner’s voice steadily rose to distract the small crowd.

“It’s like a hands-off deescalation tactic,” she later said.

The 25-year-old model and scrunchie business owner had never attended a protest before George Floyd’s killing by a Minnesota police officer in late May. But throughout most of June, she found herself in the center of CHOP with a megaphone in hand, facilitating rallies and mitigating scuffles like the unflappable conductor of a sometimes-unwieldy band. She led several demonstrations from CHOP during its 3½-week existence, including a march that concluded at Jimi Hendrix Park that day.

The demonstrations sparked a newfound passion for activism in Neuner: “I’m not going to stop from here on out,” she said.

Although the city cleared the barricades and tents from the area surrounding the Seattle Police Department’s East Precinct, CHOP’s legacy as a breeding ground for young leadership and conversations around police defunding — along with its controversy — remains.

Over a month after Floyd’s killing, Seattle protesters continue to call for the reallocation of police funding toward social services and the release of incarcerated demonstrators. Black Lives Matter Seattle-King County and other established racial justice organizations initially avoided endorsing the demonstrations, given the disproportionate impact of the novel coronavirus on the Black community. What resulted were thousands of protesters galvanized by social media and lacking centralized leadership: It paved the way for first-time young activists to cut their teeth at organizing.

Recent Garfield High School graduates Adanech Aklilu Muno and Lewam Fitwi were drawn to the demonstrations out of a desire to create a better future. “We want change,” said 18-year-old Fitwi. “We’re going to have to clean this up later, and we might as well start now.”

While the two friends had attended demonstrations since their freshman year of high school, they said the recent marches were more diverse and youth-led than previous ones.

But as Habesha peoples originating from Eritrea and Ethiopia, they’ve also craved a Black community to grieve their collective trauma. They decided to support their fellow Black women by leading a peace ceremony at a Blackout Healing next Sunday — a full-day event including yoga, art and grief rituals for Black people. During the event, they plan to reflect on the recent spate of killings of Black trans women, and to discuss ways to find resilience in everyday life.

“I’m very proud to see young people coming together to do what they’ve got to do,” Fitwi said.

The initial lack of structure of the demonstrations that bred first-time leaders also came with its share of infighting.

When Capitol Hill bartender Rashyla Levitt led thousands of protesters to the Emergency Operations Center to meet with Mayor Jenny Durkan in early June, she was criticized by other demonstrators who called her a sellout and questioned her qualifications to lead marches.

Theories that Levitt, 28, was a police plant circulated on social media. Some demonstrators suspected that she intentionally led groups into police ambushes that ended in tear gas and pepper spray. Twitter threads by concerned demonstrators warned others not to trust Levitt, backed by photos and videos of her talking to police. Levitt said the rumors evolved to emailed death threats.

Levitt denies the allegations. Despite the flak she received from fellow demonstrators, she continued to regularly join or lead protests.

“One of the coolest things about this movement is that it started out as a leaderless protest,” she said in early June. “The more voices we have behind this, the more impact it’s going to have.”

While Levitt had attended protests in the past, she said she organically became a first-time leader in the current demonstrations. As protesters hit the streets without direction in late May, she found herself merging disparate groups to create a larger impact.

The demonstrations have consisted of a series of small wins in what Levitt considers a battle for “basic human rights, and basic human decency,” she said.

Demonstrators’ efforts have convinced the city to change course in some areas: Among them, Seattle City Attorney Pete Holmes rescinded a request that could have cleared the way to end eight years of federal oversight of the Seattle police. Mayor Jenny Durkan also proposed cutting the Police Department’s roughly $400 million annual budget by 5%, although it fell short of protesters’ demands that it be slashed by 50%.

In early June, the Seattle Police Department abandoned the East Precinct following nightly standoffs between officers and protesters that often ended in police using tear gas, pepper spray and flash-bang devices against demonstrators. In place of the police presence grew a community garden, a co-op with free food, memorials for people killed by police, teach-ins and an unsanctioned homeless encampment.

But the occupation came with its own problems, and police dismantled it last Wednesday following a spate of gun violence and a lawsuit filed by businesses and residents against the city for abandoning the precinct.

Still, the occupation and continuing protests have elevated conversations about defunding the police that other youth-led organizations and coalitions such as the Seattle Black Book Club, Block the Bunker, Ending the Prison Industrial Complex, and No New Youth Jail initiated several years before.

Community organizer Rashad Barber found it surreal to hear current protesters call for defunding the police, after years of broaching the conversation in his work with Block the Bunker, a coalition of grassroots organizations that successfully halted construction of a $149 million police precinct in North Seattle in 2016. During protests at City Hall and youth-led public meetings, the campaign encouraged residents to envision how the money for the station could be spent instead.

At the time, the possibility of defunding the police “was just off the table and it was not politically feasible,” he recalled.

While Barber believes the conversation was a long time coming, he attributes the sea change in public opinion toward police funding to the current public health and economic crisis instigated by the coronavirus pandemic.

“Even before this demonstration, there was an unease of a lot of people isolated in their homes,” Barber said. “Folks have been feeling a need to do something.”

Still, Barber is concerned about the momentum’s sustainability and believes the current demands are shortsighted. As a Black man who grew up poor and has been jailed, as have his three brothers and father, Barber would like to see community-based solutions that address the roots of poverty and violence. It’s a vision Barber regularly imagines in his role as a program coordinator of nonprofit Rainier Beach Action Coalition, where Barber focuses on alternatives to policing.

“The crisis of the time calls for systemic change,” Barber said.

At 32 years old, Barber now considers himself an “elder” of the movement, and mostly stands on the sidelines to offer younger organizers advice. The concerns about police brutality and systemic racism raised by the current demonstrations mirror struggles from the civil rights movement and slavery abolition eras, Barber said.

“People thought abolishing slavery was not politically feasible at one time,” said Barber. While the idea of abolishing police frightens many people, Barber said he and others are not advocating for chaos or violence. Instead, the conversation beckons, “can we re-imagine what community safety looks like and have community needs met in a way that moves (people) away from survival?”

Young, first-time activists have long led massive social change, said Richard Pierce, a Notre Dame University associate professor of history whose work focuses on the Black experience in cities. Most of the 1960s Freedom Riders at the Greensboro sit-in were Black students without demonstration experience. Martin Luther King Jr. did most of his advocacy work in his early 30s. Protests stalled in Birmingham, Alabama in 1963, until youth — some as young as preteens — defied their parents and teachers by joining the marches.

“They filled the jails and provided a visual example of inequality and violence,” said Pierce.

In spring of 1966, thousands of Seattle Public School students launched a two-day boycott against the district for racial segregation and the underfunding of schools with a mostly or exclusively Black population. During the boycott, the students attended Freedom Schools in community buildings and churches where they learned about Black history and civil rights taught by volunteer teachers. As a result, the district accepted the protesters’ demands that ensured integration.

Lifelong Seattle resident Ron Chew, who worked as a community journalist during the civil rights era, has noticed that the civil rights movement had more cohesive leadership than the current demonstrations.

For instance, Roberto Maestas emerged as a leader when Latinx activists occupied the Beacon Hill Elementary School in 1972 to demand community space. During the 1970 occupation of Fort Lawton by Indigenous activists and their allies, Colville tribal member Bernie Whitebear came to prominence. And in the local Black Power movement, Aaron Dixon and former King County Councilmember Larry Gossett were household names.

He believes the civil rights movement and current demonstrations equally drummed up diverse support and paved a path for youth leadership.

“As you get older, you get a little more bought into gradual change,” said Chew, who recently wrote a memoir called “My Unforgotten Seattle.” “When you’re younger you have to have the change now and it has to be complete and systemic, and that’s always been the case.”

But amid the headiness of the time, Chew said he sees the remembering of forgotten hope.

“We’re in a period of renewed optimism and idealism, and without that, the world never changes,” he said.