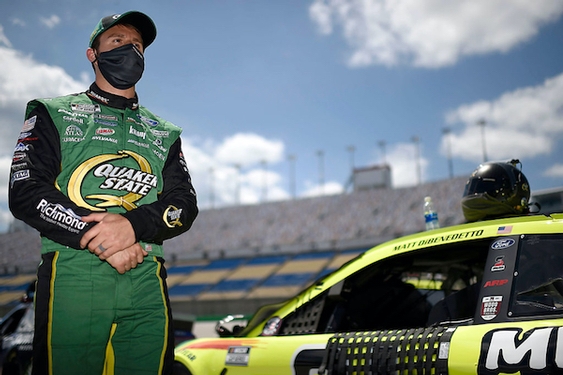 Matt DiBenedetto, driver of the #21 Menards/Quaker State Ford, waits on the grid prior to the NASCAR Cup Series Quaker State 400.

NASCAR, like every other sport, is still up against the coronavirus pandemic, but racing was one of the first sports back in May and one of the first to hold events with fans. Now, two months after its return race at Darlington, NASCAR is aiming to become the first sport with the most fans in attendance. Up to 30,000 fans are expected to attend Wednesday’s All-Star Race at the Bristol Motor Speedway stadium that seats five times that number.

“(We’re) thrilled and honored to be able to host such a legendary race,” Bristol Motor Speedway executive vice president Jerry Caldwell said last month when NASCAR and the speedways announced the race would move from Charlotte to Bristol for the first time in the race’s 35-year history.

“We also realize though that with this comes great responsibility to host a substantial number of race fans,” Caldwell said. “But we know the team we have here at Bristol Motor Speedway and Speedway Motorsports are up for the challenge.”

The annual All-Star Race has traditionally been a time for the sport to try new things. The event doesn’t count for points; it’s a race for teams to promote sponsorships, for the sanctioning body to test new rules and for fans to enjoy a free-for-all showdown as drivers compete for a $1 million cash prize.

This year will be more of the same, with car numbers that have been shifted further back on the side panels to make room for larger sponsor promotion, and a choose rule will be implemented for the event following driver requests for the new restart format. The choose rule, popular among short-track fans, forces drivers to make a lane choice (inside or outside) before a certain spot on the track for the restart, adding more strategy and organization than the current double-file restart system in which only the leader chooses a lane before the restart.

“There has already been an incredible amount of buzz around this year’s NASCAR All-Star Race with the move to Bristol Motor Speedway,” NASCAR executive vice president Steve O’Donnell said in a statement. “In addition to the thrilling racing we’re used to seeing at Bristol, the choose rule is going to add another dynamic to the race. Drivers and fans have been asking for this change and I can’t think of a better time to try it than the All-Star Race.”

In addition to the choose rule, locked-in cars will also have underglow lighting, meaning colored lights that have been inserted underneath the equipment for an added on-track effect. The lights were used during last year’s Champion’s Week in Nashville in a promotional event, but this is the first time they’ll be used at a race. While some drivers have said they think it’ll add a cool look for the nighttime event, others are indifferent. It’s a move for the spectators.

“I’m not a huge fan of (the lights),” No. 19 driver Martin Truex Jr. said. “I think it’s kind of ridiculous looking. But, you know, it’s really up to what everybody wants and what the fans like.”

This year, more than ever before, fans are the story of the All-Star Race, because they’ll finally be back watching NASCAR under unprecedented conditions. Bristol Motor Speedway has put coronavirus event fan protocols in place, which include staggered gate entry times, temperature checks for suite guests and required face masks upon arrival. Coolers and cash payments for concessions will also not be permitted, among other protocols, according to the speedway.

Drivers, now accustomed to the quiet tracks, said they’re ready for the return of fans.

“All this time’s made us appreciate all the little things and, goodness yeah, we miss that energy,” No. 21 driver said.

DiBenedetto, who is entered for the pre-race All-Star Open qualifying event, said fans can expect “all-or-nothing” racing typical of the event since “everyone’s gonna have that same mindset of it’s a non-points race and you have everything on the line and you’re trying to race for a million bucks.”

“That’s why these races can tend to be more aggressive or more dirty moves to try and advance, or win a stage or win the All-Star Race, whatever it is, just because there’s not quite the repercussions of winning a points race,” DiBendetto added.

The No. 21 driver, who is currently ranked 12th in points standings, said that the short-track location will create an additional entertaining element this year.

“At Bristol, a short-track with a low downforce package, you definitely can get to somebody’s bumper, so that could make it extra exciting for the fact that we’re doing this on a short-track and people will be extra aggressive,” DiBenedetto said.

It’ll be expected that drivers throw caution to the wind for the midweek, four-stage shootout race before teams are back to the playoff hunt at Texas on Sunday. But as a reminder to the tens of thousands of fans headed to Bristol for live racing in the time of coronavirus, leave the close contact to the drivers.