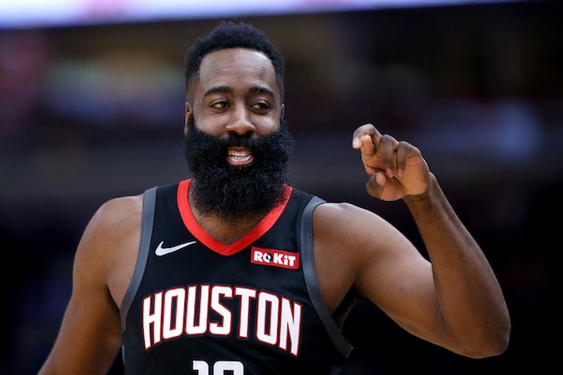 The Houston Rockets' James Harden has a laugh during a game against the Chicago Bulls at the United Center in Chicago on November 9, 2019. (Chris Sweda/Chicago Tribune/TNS)

The Houston Rockets guard, one of the NBA’s toughest defensive assignments and the league’s best scorer, had just finished with his first practice with the Rockets on Thursday after a late arrival to the Disney World campus when a hint of excitement crept through the forest of hair that grows on his face.

The Rockets are scheduled for three scrimmages and eight seeding games, but for Harden and most of the teams in Orlando, Florida, the real tests start in mid-August when the playoffs begin. With no travel or hostile crowds, the playing field has been leveled.

“… For us, it’s about getting into shape and making sure our offense and defense are crisp and we’re all on the same page. We’ll play anybody.”

While home-court advantage cannot be replicated when none of the teams are actually playing on their home courts in a bubble environment, “home” teams will still have some familiar touches.

On Wednesday, Dallas coach Rick Carlisle took a peek inside of one of the playing venues on the ESPN Wide World of Sports Complex.

“I expect (it) to be very similar to a game — without fans — if that makes sense. I do think that you’ll have some crowd noise. They’ve talked about it,” Lakers forward Jared Dudley said. “I’m expecting a Lakers chant, the music when we come out for our intros, how it has the (organ), the different vibe, different stuff during the game.”

People with knowledge of the situation said final details are still being planned out for the full game-day experience. League executives inside the Orlando bubble are expecting a walk-through in the upcoming days. While some Randy Newman here for the Lakers and some “Dos Minutos” there for the Miami Heat are nice touches, they’re certainly not worth going all out for during those eight seeding games.

Boston Celtics coach Brad Stevens said those seeding games can provide his team an opportunity to start to rebuild and move toward the postseason with as much going right as possible.

In the West, the seeding games will largely be irrelevant for the Lakers and the Los Angeles Clippers, who are cemented at the top and almost guaranteed not to meet until the conference finals. And while the games will determine who makes the playoffs as the No. 8 seed, they could shuffle the No. 3-6 teams, who are separated by only two games in the loss column.

Teams in those positions could be tempted to try to work themselves into more favorable matchups by resting players at “strategic” times, though coach Mike D’Antoni said the Rockets won’t be one of them.

“The only thing you can do is what’s best for your team.”