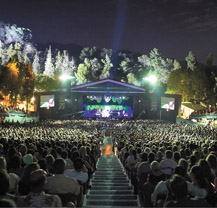 There is an endless array of possibilities in Griffith Park, one of those prominent places that makes Los Angeles, well … Los Angeles. Home to large travel trains, reptiles and re-constructions of the Wild West dotting its many parts, the Greek Theatre is the little amphitheater that could, serving out music for the masses.

Its Greek column structure dates back to the 1930s, and eight million visitors have walked through its turnstiles since 1978. Nestled in the heart of Griffith Park, amongst all the surrounding greenery, the Greek Theatre is a true musical gem, making Griffith Park what it is, and in turn making Los Angeles what it is as well.

Used as barracks during World War II, the Greek Theatre has been the home to performances by such artists as the Who, Alicia Keys, Pearl Jam, Elton John and Radiohead. In the upcoming months, the venue will see such prominent rock acts as Bloc Party , Death Cab for Cutie, 311 and Keane.

There's no bad seat in the 5,700 capacity venue]; a seat near the pit is as good as a bench seat, due to the venue's perfectly orchestrated seating arrangement. And for those who deem it fit to lounge out in the parking lot, just basking or trying to make out the sounds; you're missing out. The intimate concert setting ensures a communal experience for all.

A common concern in going to a concert besides what to wear (is wearing the band's official T-shirt acceptable?) is the sound. A deal maker or deal breaker, bad acoustics can ruin relationships. A crazy shift in the eyes from your girlfriend/boyfriend or BFF will tell you he or she is displeased that you took them to a lousy sounding show. Luckily the Greek boasts state of the Kniwing this, it is important to say: bring your ear plugs. Truly ear exploding, The Greek gives ticket holders the best sound experience of any outdoor or even indoor venue in L.A. On a night when Detroit rockers, the White Stripes came into town (their last few shows in L.A. were at the Greek), the guitar thrashing coupled with the screaming yelp of Jack White could be felt, pushing back spectators to their retractable seat or park bench. God bless you, Greek Theatre Acoustic Sound Team.

For those that say “it's not all about the music mannnn,” I say, Blasphemy! Still, the Greek though has food covered, serving everything from fine cheeses to chilled poached salmon with lemon-dill sauce. Laid back Angelinos will be relieved to know that The Greek serves an essential L.A. food staple, Pink's Hot Dogs. As a bonus you get to order them in the cool Griffith Park twilight rather than under the scorching UV rays on a Hollywood sidewalk. Well, alright!

So what are you waiting for? If your favorite musical artist/band happens to perform at the Greek, start withdrawing from that good ole' account. For bang-equals-buck quality, the Greek Theatre is hands down the best venue in L.A. You really are lucky that you live here.