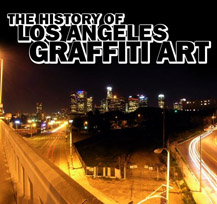 There are a number of things that will always be a mystery. Why is the sky blue? Why do you park on a driveway and drive on a parkway? How do flies land on the ceiling (are they flying upside down the whole time or do they do a barrel roll at the last second)? How do people do graffiti?

If the last question is the one that is keeping you up at night while you suffer through reruns of “21 Jump Street” (although anything starring Richard Grieco is never too bad) then perhaps you should make your way out to The History of Los Angeles Graffiti Art All-City Tour.

The tour, a publicity campaign for the book of the same title, offers live paintings, a book signing and a chance to meet many of the graffiti pioneers featured in the 450 pages of photos, stories, and interviews from the 1983-1988 Los Angeles graffiti scene

The most crowd-pleasing part of the tour is undoubtedly the live painting, as patrons are able to view the handiwork of graffiti legends right in front of their eyes. The latest stop on the tour, on July 29th at Meltdown Comics, featured pieces from Dash2000 UTI, Siner LTS, Make STN, Besk UCA, Miner WCA and others.

Graffiti is an extremely volatile issue in Los Angeles. Supporters laud it as an art form while detractors claim that it destroys the city's quality of life. Graffiti, though, has become a major part of L.A. – in the art galleries, on the freeways, in the riverbeds and as a focal point of police campaigns.

Through the book and now the tour, authors Robert “Wisk” Alva and Robert “Relax” Reiling show how it all began in the City of Angels. Definitely catch one of the stops on the All-City Tour.

Tour dates are announced, as they are booked. For more information on the book and the tour, visit www.thehistoryoflosangelesgraffitiart.com.