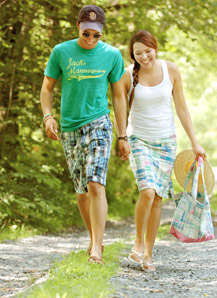 Rachel Bilson's wearing it. Jessica Simpson sports it. Heck, even Ashton Kutcher dons the funky plaid that's making a huge fashion comeback. Madras, a light-weight, bright fabric that screams summer, is huge in Hollywood and is creeping into catalogs and clothing stores.

Melissa Moylan, an editor at FashionSnoops, a trend forecasting company , says the style is back even bigger this year because the casual look is booming.

“Because culture today is so casual, there was a demand for something cool and fun with less structure,” Moylan noted by e-mail. “Madras fits right in with the demand, so it has become readily available.”

The fabric is named for the city in India where it was first woven. Introduced to the United States in the 1930s, it didn't become popular until the 1950s and 1960s.

Madras is made of loosely woven cotton threads in bright colors, including pinks, blues and greens. The weave creates a plaid patchwork of extremely soft material that hangs away from the body to prevent uncomfortable clinging.

In its heyday madras was known for its running dyes. Every time the madras was washed the colors would run, creating a unique washed-out look, known as bleeding madras.

The look was fashionable, but there was a fine line between hip and too washed out. Hipsters from the 1950s and 1960s knew exactly how many times they could wash their madras before it became too faded.

Madras dyes no longer run so the washed-out look has become a thing of the past. Today, the basic patterns and color schemes are similar to the original style. Maine-based madras wholesaler Jenna Sisselman even sells a color scheme identical to one sold in the 1950s and 1960s.

“Madras is madras,” says Trisha Fritz, the buyer of men's and women's apparel for Dunkelberger's. “They're the same colors. The styles are just updated.”

“The print hasn't really changed that much,” says Andrea Lui, brand manager at Old Navy. What's changed, she says is “where you're seeing it.”

“Today, you're seeing it in skirts and things that women can wear... It's not really the madras that's changed, but the product and the styling that's changing.”

The fabric calls to mind a casual, preppy style.

“Madras represents a lifestyle,” Sisselman says. “Even if you can't be on vacation, you're out to look and feel like you are. People are looking for something fun and bright and relaxing.”

Sisselman thinks the preppy craze is on the rise. “People's clothing styles are becoming more conservative, and madras is a conservative style,” she says.

No matter which style madras you choose there are a couple key style clues to help you avoid a major fashion faux pas.

Kraft, Star's fashion expert, says first, avoid wearing madras from head to toe. Pick a piece, either a cute skirt, shorts, or a fun top and pair it with something more subdued.

“When you enter the trend, go carefully,” Kraft says. “Do it piece by piece. Try a shirt or pair of shorts. Don't do both. Try it on a weekend, if you feel confident in it then invest more in the trend.”

Patricia Handschiegel, the editor of StyleDiary.net, a Web site that gives style advice, offers some ways to jazz up madras.

She suggests layering a little white cardigan over a madras top and chino shorts.

If you want to wear the madras on the bottom, you really have to let that piece be your outfit's statement, she says. “That fabric in itself is going to command attention. Everything else should take a supporting role.”

“One thing that I would definitely recommend is to be open to possibilities,” she says. “It's a print that's fun to play with.”