Aaron Eckhart: Smoking Leads to Conversations with Other Women 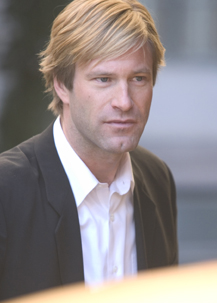 After several strong performances in supporting roles ( Erin Brockovich and Nurse Betty ) and a mushrooming professional range as an actor, Aaron Eckhart currently stars alongside Helena Bonham Carter in Conversations with Other Women . Displaying emotional complexity and the subtle physical expressions of his nameless character, Eckhart steps into the shoes of an immature bachelor with untapped charm and confidence.

According to the actor, who most recently starred in the well-received satire Thank You for Smoking , it was the unconventional love story and crisp dialogue that attracted him to Conversations .

“It's such a well-written script with an adult love story. Lots of good dialogue and chances to act. Helena was on it before me. I liked it so much that I had to do it. I wanted to act with her and do a love story with her; to make out with her,” he says. “We are such an unlikely couple that to make a relationship work was a lot of fun.”

The unconventional approach to a conventional subject and the romantic alliance between two different personalities, Eckhart says, are what formed the heart of this love story. In order to convey the sharp differences and perspectives of the man and woman, director Hans Canosa utilized a split screen. The purpose of this technique was to metaphorically show the different sides of the love story and to simultaneously show the actions and reactions of each character.

“The way they filmed the split screen … well, she has one camera and I have one camera on me at all times. It was no more difficult than the constraints of a normal procedure. It actually opened us up and allowed us to be freer as actors because, you know, in normal filmmaking, one camera would be on one person and the other person would be off-camera,” Eckhart says.

This constant and uninterrupted presence on camera allowed very little relaxation and demanded an almost complete metamorphosis into the characters. “So, this person [off-camera] still has to follow the scene and act but they're not as responsible as on-camera,” Eckhart adds. “So, you can get lazy at this point. When the camera is on both of you at all times, you have to play. By virtue of the fact that we were on camera all times, we were our best at all times. That was good; we were creative. We didn't need to turn the camera around to recreate a moment because it was there already.”

Besides the visual innovation of using the split screen, the cast and crew, says Eckhart, enjoyed creative liberty and leeway during filming. “There wasn't a lot of pressure on us. We shot on DV, which was an experimental thing, and we didn't have the constraints of film. Plus, the movie cost so little that we didn't have any pressure on us. We just could make the movie that we wanted to make. And the script was just a beautiful love story. It was two 35-year-old people and it could still be fun and sexy.”

The undeniable romance between Carter's character and Eckhart's in spite of each's attempts not to explicitly address it is the propeller of the film. Each character basks in his or her half of the screen and metaphorically reveals their side of the story and past secrets.

“What Helena thinks and what I think are two completely different things. I think my character portrays more the generalization of men as the perpetual youngster, bachelor immature attitude towards love and commitment. Her [character] is the more rational. I think women, at least from my experience, realize when things are over and commit to the fact that it's over. Men are always trying to hold on to something, to conquer, to keep, yet not commit. I think this plays out here,” he says.

For Eckhart, the “appreciation of good scripts and good writing” is what lies behind his two current critical successes: Conversations and Thank You for Smoking . “I do appreciate good writing; it's fun to say those words [in the films]. I mean the rooftop scene, for example, is one of my favorite scenes. It's beautifully done.”

The mere presence of intelligent dialogue is the deciding factor for Eckhart. “I like words,” he says, before honestly concluding, “but I don't know if I convince you of anything.”

Conversations with Other Women releases in select theaters Aug. 11.