Funny Onscreen: The Real Will Ferrell Is No Wild and Crazy Guy 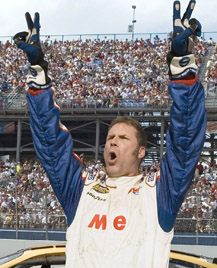 When Will Ferrell went to Berlin this summer for some World Cup soccer action, he was quickly spotted by a trio of American fans at the souvenir stand.

“Frank the Tank!” shouted one fan, referring to Ferrell's Old School character who gets hammered at a frat party and runs naked through the night.

Ferrell stared back, suddenly feeling like he was onstage. All he could offer was a wave and a friendly “hey.”

“I feel like I'm constantly letting people down,” says the 39-year-old comedian holding forth on his new NASCAR comedy Talladega Nights: The Ballad of Ricky Bobby . “But that's my rule with myself. If I feel like doing a bit and having fun, I go for it. If I don't, I'm always polite and thankful that someone is recognizing me.”

Some funny movie people are remarkably unfunny in real life. Christopher Guest leaps to mind. Ferrell isn't that way. He definitely doesn't act like the guy who runs around in his underwear or in his birthday suit in seemingly every one of his movies.

Ask Ferrell if he knows any good jokes and a look of quiet panic crosses his face.

“I'm a terrible joke teller,” he says. “I get told decent ones, then I can never remember them. Shoot. The pressure's on. My dad just told me one, too.”

He ponders another moment, then punts.

“I'm a bust. That's why I wasn't very good at standup. In standup you get five minutes, and it would take me three-and-a-half of those minutes to set up my premise.”

So if he can't tell jokes, and he's not a manic attention grabber who bounces off the walls like Robin Williams during interviews, then what is it that makes Ferrell so funny?

For one, he's willing to do almost anything for a laugh, be it stripping to his skivvies or banging on the cowbell like a man possessed. When the lights go down, his vanity seems to go with them.

The funniest scene in Talladega Nights takes place at Ricky Bobby's dinner table, where the racing star debates his family and his teammate (John C. Reilly, another quicksilver comic thinker) over which Jesus to address during grace.

Ricky prefers the baby version. The others disagree. The variations and hairsplitting fly fast and furious, with a flare that can't spring strictly from the written page. At the end of the movie, the outtakes from the scene yield even more gold.

Ferrell and Adam McKay, the director of Talladega and the Ferrell vehicle Anchorman , bonded over their love for improv when McKay was head writer on “Saturday Night Live.”

Now they indulge themselves on the big screen.

“Most comedies, you do all the takes as written, and then for the last one it's like, ‘have some fun, see what we come up with,'” says Ferrell. “Adam and I are kind of the opposite, almost to our detriment. We write some decent stuff, then we say ‘let's do it one more time.' That's the way we like to work.”

It's also the way Ferrell liked to work with the Groundlings, the L.A. improv troupe with whom he cut his teeth. Even before that, Ferrell and his buddies used to drive to Vegas, where they would sit at a blackjack table and act like complete strangers for six hours at a stretch.

“Granted, we were drunk,” he says.

It's the closest he comes to a joke during the entire interview.