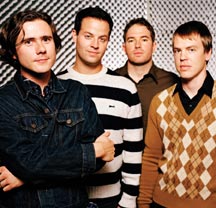 Chances are, if you know Jimmy Eat World, you’ve gotta love them. They have been mainstays of underground rock since their 1996 debut album, Static Prevails, and since then have slowly grown their fan base — like some gelatinous horror movie creature — bringing fun times and great music wherever they go.

Jimmy Eat World’s first album follow-up, Clarity in 1999, took the band to the brink of mainstream success, making them a barometer of cool for fans in the know. But it was 2001’s Bleed American that re-dubbed Jimmy Eat World, rocketing the band into the core of rock’s mainstream. Singles like "Bleed American," "Sweetness," and, most notably, "The Middle," made Jimmy Eat World a household name, further cementing their place in the rock world.

The band’s fourth album, Futures, hits stores Oct. 19 and promises to be their most intrepid offering yet. Following their pattern, the newest disc will be a marked departure from their previous style and a steady evolution in their music.

Even with their earliest work, listeners could hear Jimmy Eat World’s metamorphosis with each succeeding album.

"When we made Static Prevails, that was really our first time working in a real studio, so we were figuring it out as we went along," explains bassist Rick Burch. "When we went back to do Clarity, we were more comfortable to try new things and experiment a little."

This experimentation led to songs that were multi-layered and difficult to reproduce in a concert setting. This didn’t bother Burch, though. "When we’re working on the songs in the studio, we really don’t think too much on how we’re going to do them live. We worry about that after we are done recording."

In 2001, following the release of their third album, the band — completed by guitarist Tom Linton, drummer Zach Lind and vocalist Jim Adkins — faced the problem of how the country might view their latest release.

Burch remembers: "After what happened on Sept. 11, we just sat down as a band and said, ‘You know what? This is probably not the best time to have those two words (Bleed American) right next to each other.’ Even though there was no negative meaning behind them, we decided to take them off the front of the record."

In Bleed American, Jimmy Eat World stripped their music down to the absolute core of its meaning, without any of the fat that had been present on previous releases. Futures seems to be the exact opposite, with almost every song having sprawling moments, seemingly without a care to its own structure.

"What you’re hearing is the difference between the ways these two records were made," explains Burch. "When Bleed American was made, we were paying for it ourselves. We had limited time to make the record. So when we were writing songs and in the studio, for instance, if some simple transition wasn’t working right, instead of spending a day or two getting it down, we’d get rid of it and go straight from the verse to the chorus.

"What came out was a really kind of stripped down, bare bones recording process. Whereas with Futures, we had more secure studio time and a budget, so we were able to go ahead and try a lot of different ideas. That’s where the expansion happened as far [the] layers on Futures."

The layers, in fact, have become the defining characteristic of the disc. On tracks such as "Polaris" and "Drugs or Me," the band favors a more slow moving, low key, ambient feel — made possible by the time and effort put into creating a soundscape. Other cuts are more reminiscent of Jimmy Eat World’s straight-ahead rock approach, such as the single "Pain," "Work" and the standout track, "Just Tonight…"

The songs on Futures prove to be unrelenting, with a balanced amalgam between the head-banging of "Bleed American" and the accessibility of "The Middle." In other words, Jimmy Eat World has found a way to combine the best of both worlds.

The title of the album also signifies both the simple and the complex. "It’s about things getting better — for all of us, in our personal lives, public things, just overall. We get too bogged down in the present," insists Burch. "It’s kind of just about looking at the future."

Speaking about our society’s future, rock bands have recently become involved in the political arena. Although Jimmy Eat World claims not to be a politically preachy band, Burch admits that the news can sometimes be hard to ignore. "It’s hard nowadays to not be somewhat aware of what’s going on," he laments.

On the Jimmy Eat World Web site, however, the band does have a link marked "Vote." Where most bands may link online visitors to vote for their latest single on MTV’s "TRL," the band opted instead to link fans to a voter registration site.

"We are trying to raise awareness, in general," admits Burch. "Not saying, ‘Vote for this guy,’ or ‘Think like this.’ We’re trying to instigate thinking. The final end of that is making your thoughts known by voting." Though the band hasn’t made any public political statements for either party or candidate, the band did contribute a track Future Soundtrack of America, put together by the political organization MoveOn.org.

This subtle political activism is characteristic of the four guys from Arizona, who have a well-deserved reputation for being relaxed and soft spoken — the kinder gentler rock stars, if you will. Burch laughs at the characterization, acknowledging its truth.

"It’s just who we are, it’s so boring. I don’t know how the party bands do it, because when you’re on the road, it’s tiring enough," reveals Burch.

"It’s hard enough as it is, let alone, if you get drunk every night. I think it would be impossible to do what we do with a hangover."

Futures releases in stores Oct. 19. Jimmy Eat World will be playing on Oct. 18 at the Glass House in Pomona and on Oct. 29 at the Henry Fonda Theater in Hollywood. The band will also be performing on Oct. 22 for "Jimmy Kimmel Live." For more information, visit jimmyeatworld.com.