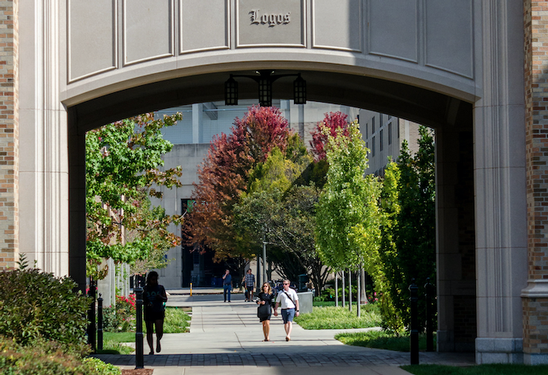 Even with more universities replacing in-person classes with virtual ones, the threat of COVID-19 lingers in college towns with their shared apartments, Greek houses and spirit of untrammeled off-campus freedom.

At University of Notre Dame in Indiana, a surge of more than 150 positive cases in two days among its 12,000 students prompted the school to move to virtual instruction for at least two weeks. Contact tracing efforts, however, found that most of those cases stemmed from seniors living off campus.

Five of Sean Ebben’s six roommates tested positive this week. Still, Ebben said he plans to stay in the six-bedroom split-level home they share. The school moved one infected roommate to a quarantine apartment, but the four others are planning to stay in the house, based on guidance from the university, Ebben said. He tested negative Tuesday morning through a rapid test at the football stadium.

“We’re trying to divide the house up so we’re separated a little bit,” said the 21-year-old accounting major. “We are trying to figure it out as we go.”

Amid the flurry of outbreaks as the academic year kicks off, more colleges are pivoting away from the in-person experiences for which they spent months planning. Yet almost 75% of colleges are allowing all students to come back to campus this fall, even if some or all classes are virtual, according to an analysis of the 700 largest four-year residential colleges in the U.S. by Burbio, a New York-based data service. Just about 12% of those institutions will allow no students on campus. Another 12% will allow only a certain segment of students on campus.”

In every phase of this pandemic, we as a society have underestimated the tenacity of this virus and overestimated our ability to control it,” said Howard Koh, a professor of public health at Harvard University and assistant secretary for Health and Human Services under President Barack Obama. “The colleges are now the latest example of that.”

Colleges are under tremendous financial pressure to resume in-person classes and collect tuition and fees. When schools sent students home in March, many refunded room and board for the spring. Schools also lost revenue from scrapped summer programs and now-canceled sports like football. Tuition dollars influenced colleges’ decisions to attempt to resume in-person classes, but that is less important than room and board for many colleges, said Robert Kelchen, an associate professor of higher education at Seton Hall University.

“They are most concerned about losing tuition from first-year students relative to other students,” he said. His own university in South Orange, New Jersey, also said on Aug. 15 it was moving online for the week of Aug. 24, and expects to resume in-person classes the following week.

“Students do a pretty good job on campus. What they do off campus and or on their own time is harder to see or control,” said Kelchen, whose school is fenced off from streets lined with shared houses.

President Donald Trump, too, has suggested that colleges should strive to keep students in schools. “Instead of saving lives, a decision to close universities could cost lives,” he said during a news briefing Wednesday, saying that it’s safer for young people to live together on campuses rather than spread the virus to older people.

The day before, the World Health Organization warned that young people are becoming the primary transmitters of the virus in many nations. Across the U.S., officials have reported evidence of the trend.

This week, Notre Dame joined the University of North Carolina, Chapel Hill in reversing plans for in-person classes. At UNC, 130 students, including some at fraternity houses, tested positive for the novel coronavirus last week, according to data provided by the school. On the heels of those outbreaks, Michigan State University announced it would suspend in-person classes when school starts, too.

Brown University in Providence, Rhode Island, whose president declared in April that campuses “have a duty to reopen,”‘ last week said undergraduates who would have returned for a September start will be delayed until at least Oct. 5, and the semester may be remote if the public-health situation hasn’t improved.

In a letter this week to Purdue University students, Katherine Sermersheim, dean of students, noted that some universities have halted in-person classes after parties.

“Plainly stated, hosting or attending gatherings and parties where social distancing is not possible and masks are not worn represent violations of the Protect Purdue Pledge; if you don’t abide by rules, there is no place for you here,” she wrote.

In practice, such rules can be difficult to enforce.

Kenadie Wilde, a junior at Baylor University in Waco, Texas, said she was shocked when she returned to campus and noticed large clusters of students hanging out barefaced, and no staff enforcing the school’s mask policy.

Baylor has required returning students to wear masks in public spaces and show they have a negative COVID-19 test. Classes are a mix of virtual and in-person. Despite those precautions, she said, she expects disaster.

“I’ve seen Snap stories of people partying in their hometowns,” she said. “I’m just waiting for there to be an outbreak.”

Michigan State, with almost 50,000 students, has worked on joint marketing campaigns with the city of East Lansing to encourage off-campus residents to avoid risk.

“Any time you have large populations there are concerns for outbreaks,” said spokeswoman Emily Guerrant. At Notre Dame, senior Ben Tompoles sat three desks apart from his peers in classrooms, and his professors lectured behind plexiglass.

In his campus dormitory with three roommates, no guests are allowed.

If the university forces him to leave, Tompoles said, he may consider looking for an off-campus apartment.

“The university has had a lot of control on what happens on campus,” he said. “But with people who are able to get off campus and do what they want, the university really can’t control that, so that’s where a lot of the issues are coming from.”

Campus News
College students wonder: Are they getting a quality education? Will they get sick?
41 views