By Emily Brindley and Zach Murdock - The Hartford Courant (TNS) 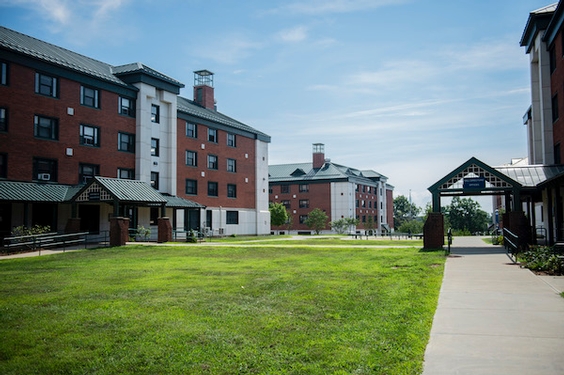 The green area in the center of the Towers Residence Hall during move-in day at UConn Friday, Aug. 14, 2020, in Storrs. (Kassi Jackson/The Hartford Courant/TNS)

Several UConn students have been evicted from on-campus student housing after video of a packed dorm-room party with no social distancing or face masks was shared widely on social media Monday night.

University officials condemned the students for “endangering not only their own health and well being, but that of others” and have opened investigations into the students and party.

Some of the students involved also have had their student housing revoked, so they must either return home or find new off-campus housing, and were issued interim actions while the university investigates, UConn spokeswoman Stephanie Reitz said. It was not immediately clear Tuesday night how many students have been reprimanded.

Video of the party spread online Tuesday as the university announced that 25 students have been placed into self-quarantine as a precaution after coming in contact with five UConn students who have tested positive for COVID-19.

Similar videos of packed parties have emerged from universities across the country and some schools are already beginning to dial back on-campus life or end in-person classes entirely after spikes in new cases.

But the video at UConn is not representative of the thousands of students taking the school’s coronavirus precautions seriously, said UConn Dean of Students Eleanor Daugherty and Residential Life Director Pamela Schipani in a letter to students late Tuesday.

“We cannot afford the cost to the public health that is associated with inviting students into a room for a late night party,” they continued. “The vast majority of our students are doing the right thing — but every student needs to do the same.”

The five on-campus students who tested positive are being housed in UConn’s isolation spaces, the university said. That doesn’t include 25 additional students who are under medical quarantine after potential exposure to one or more of the positive cases.

But university officials have said that the positive cases are no need for alarm. The five on-campus cases were identified out of a total of 3,850 tests — for a positivity rate of 0.13%, which is well below the state’s average positivity rate.

“There will undoubtedly be more positive cases as more test results are returned in the coming days, and we will address each the same way as we work to protect the health of individual students and our community,” Daugherty said in a statement.

The university also said that it has tested 1,874 employees, and none have tested positive.

Campus News
College students wonder: Are they getting a quality education? Will they get sick?
42 views