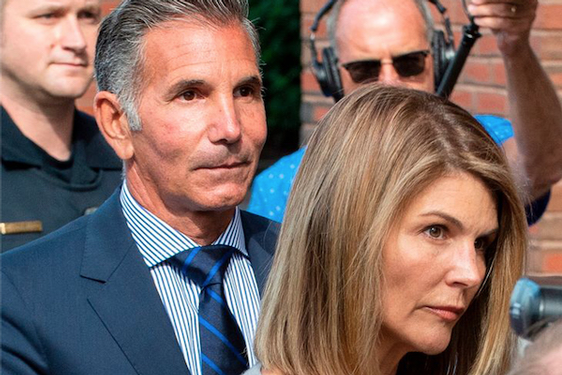 The fashion designer J. Mossimo Giannulli, who with his wife, actress Lori Loughlin, admitted fixing their two daughters’ admission to the University of Southern California with bribes and bogus athletic credentials, was sentenced Friday to five months in prison.

Loughlin will be sentenced on Friday afternoon by the same U.S. District Court judge, Nathaniel M. Gorton. Prosecutors have asked the judge to commit her to prison for two months.

Gorton ordered Giannulli, 57, to report to prison by Nov. 19. He must pay a $250,000 fine and perform 250 hours of community service after he is released from custody.

Giannulli’s lawyer, Sean Berkowitz, described his client as “a good man who made terrible mistakes” and urged Gorton to consider the context of his crimes.

“Moss’ top priority was, is and always will be his children,” he said.

In a brief statement to the judge, Giannulli said he took “full responsibility” for his conduct and regretted the harm it has caused to his daughters, his wife and the public.

Noting he is more often tasked with imposing punishment on drug dealers and gun runners from troubled backgrounds, Gorton told Giannulli he found it hard to believe that a successful, savvy businessman whose upbringing was, in his own words, “fantastic,” stood before him to be sentenced for a federal crime.

“You were not stealing bread to feed your family,” the judge said. “You had no excuse for your crime, and that makes it all the more blameworthy.”

Although Giannulli and Loughlin both acknowledged conspiring with William “Rick” Singer, a Newport Beach consultant who orchestrated a sprawling college admissions fraud, prosecutors said Giannulli was more involved in the scheme than his wife and deserved a longer prison sentence. Unlike every other defendant sentenced to date in the case, Loughlin and Giannulli did not submit sentencing memos or letters to the judge explaining their conduct and asking for a particular punishment.

Loughlin and Giannulli each pleaded guilty in May to a single count of fraud conspiracy, a reversal from 14 months of insisting they’d done nothing wrong. The couple had mounted an aggressive defense that included accusing federal prosecutors in Boston of “extraordinary” misconduct.

Berkowitz told Gorton that Giannulli, who did not graduate from college and needed guidance with helping his children navigate the admissions process, sought out Singer in May 2015 at the recommendation of Mark Hauser, who chaired the board of their daughters’ private high school on Los Angeles’ Westside.

Singer, a college counselor who catered to a wealthy clientele, “was not presented as a felon or a huckster or a fraud,” Berkowitz said. For about a year, he tutored the Giannullis’ daughters and offered legitimate support and advice, the lawyer said, adding that the girls earned high marks and were admitted to several colleges through legitimate channels.

In the government’s account — set out in four indictments and an FBI agent’s affidavit — Giannulli and Loughlin’s dealings with Singer turned criminal in April 2016. Giannulli emailed Singer to say he had “concerns” after sitting down that morning with his older daughter’s high school counselor. The designer wanted to come up with “a roadmap” to ensure she ended up somewhere other than Arizona State University.

Singer’s “roadmap” was this: misrepresenting their daughter as a promising coxswain — the member of a rowing team that guides the boat — and bribing an administrator at USC to vouch for the girl’s fabricated credentials. “Would probably help to get a picture with her on an (ergometer) in workout clothes like a real athlete,” Singer wrote to Giannulli.

It was at this moment, Berkowitz told the court, that Giannulli “ignored alarm bells, he ignored red flags.”

“Fantastic,” the designer wrote back. “Will get all.” He sent Singer a picture of his daughter posing on a rowing machine, copying her on the email, Justin D. O’Connell, an assistant U.S. attorney, wrote in a sentencing memo.

Even as Giannulli, Loughlin and Singer were pursuing their fraudulent scheme, USC fundraising officials were courting the couple, emails filed in court show. An employee in the school’s development office wrote to Giannulli and offered to “flag” his daughter’s application and set up “a 1:1 opportunity for her, customized tour of campus for the family, and/or classroom visit.”

“Thanks so much, I think we are squared away,” Giannulli wrote back. He forwarded the email thread to his wife that night, adding, “The nicest I’ve been at blowing off somebody.”

A month later, Donna Heinel, then USC’s third-ranking administrator in its athletics department, presented the Giannullis’ daughter to an admissions committee as a recruit for the rowing team, prosecutors allege.

Over decades of working as a college counselor, Singer had found a soft spot in the admissions process at USC, which was becoming one of the most prestigious — and selective — universities in California. Heinel was trusted with bringing lists of recruits compiled by USC coaches to a special committee that decided whether to admit them.

In the prosecution’s telling, Singer bribed Heinel to add the names of his clients’ children to these lists, essentially holding them to a far lower standard of admission than if they had applied through normal channels. Heinel, who was fired from USC after her arrest last March, has pleaded not guilty to conspiring to commit racketeering, fraud and bribery.

Once the Giannullis’ daughter was admitted as a rowing recruit, Singer told her father to write two checks, one sent to Heinel and payable to “USC Athletics” for $50,000, the other a $200,000 “donation” to Singer’s nonprofit, the Key Worldwide Foundation.

Giannulli sent the invoice from Singer’s foundation to his financial adviser, writing, “Good news my (older) daughter is in (U)SC … bad (news) is I had to work the system.”

Later that year, he sent Singer an email with the subject line “Trojan happiness.” “Both Lori and I are very appreciative of your efforts and end result!” he wrote.

Singer asked whether there was “a similar need” for their younger daughter. There was. They pulled off a near-identical scam: Giannulli sent Singer a picture of his daughter posing on an ergometer, Singer created a bogus athletic resume, and Heinel presented the girl to the admissions committee as a recruited rower, prosecutors say.

She was admitted in 2017, and her father sent Heinel a $50,000 check payable to USC’s Galen Center and “donated” $200,000 to Singer’s foundation. “Can’t I write this off?” Giannulli asked his financial adviser.

Loughlin and Giannulli cautioned their younger daughter about tipping off a counselor at her high school. Listing USC as her top choice school “might be a flag for the weasel to meddle,” Loughlin remarked, according to a sentencing memo filed by prosecutors. Giannulli called him a “nosey bastard.”

The counselor did, in fact, grow suspicious. Advised that the Giannullis’ daughter had been presented as an athlete, he told USC he doubted she was a competitive rower, given her busy schedule as a video blogger.

Giannulli confronted the counselor at his daughter’s school, insisting his daughter was a bona fide coxswain and demanding to know “why I was trying to ruin or get in the way of their opportunities,” the counselor wrote in a memo, which prosecutors filed in court.

That day, Heinel left Singer a voicemail. “I don’t want the — the parents getting angry and creating any type of disturbance at the school,” she said, according to a transcript of the voicemail filed in court. Parents couldn’t wander onto high school campuses, “yelling at counselors,” she told Singer. “That’ll shut everything — that’ll shut everything down.”

O’Connell, the federal prosecutor, singled out Giannulli’s “steamrolling an honest high school counselor who tried to do the right thing” in stressing the need to send him to prison.