The Sword: Has a Sharp Edge 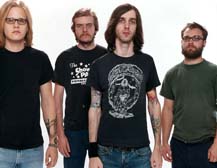 To a casual observer, the success of Austin, Texas, heavy metal band the Sword may induce a few head-scratching questions.

A) Why was a new group that plays music that feels like a caravan of African elephants marching across your sternum lauded by MTV's “You Hear it First”?

B) What is the magic handshake that gets a heavy metal band not only welcomed, but embraced, by indie rockers?

C) What the hell is “hipster metal,” anyway?

If you're looking for deep answers, don't bother knocking on the Sword's van door. Singer-guitarist J.D. Cronise is “unavailable”; he's engrossed in “Grand Theft Auto” on PlayStation 2. Guitarist Kyle Shutt also is video gaming. Bassist Bryan Richie, when not twirling his mustache hairs, offers this insight regarding the Sword's indie-rock acceptance: “That is a good question, because I really don't have the answer.”

Drummer Trivett Wingo sets down a David Foster Wallace novel, Infinite Jest , to question the question itself: “I don't even know who decides what an indie rocker is, and who an indie rocker is,” Wingo says. “What's the criteria? What's the yardstick for that? It's just like jibber-jabber to me.”

None of this is particularly relevant, anyway. Since forming in 2003, the Sword has had the skull-crushing answer to the only question that matters at a heavy metal concert: Are you ready to ROCK?

“We always destroy,” Wingo explains. “It's like the Fat Man or the Little Boy. Those are your two choices. Which size city do you want to obliterate?”

The monolithic songs on the Sword's debut CD, Age of Winters , sound – almost eerily so – like Black Sabbath in 1971. The Sword, in a proto-metal sense, are the “Children of the Grave” that Ozzy Osbourne howled about while Tony Iommi laid down the butcher-block riffs that gave birth to modern gloom- and doom-metal. The Sword are the offspring that Ozzy would have spawned if the metal universe were guided by order rather than chaos – if, in this reality of good and evil, evil was good.

After emerging as a buzz band at the South by Southwest Music Conference in Austin in 2005, the Sword has been hailed by publications ranging from Spin to the New York Times . Shortly after SXSW, Kemado Records signed the band that has become a hit with fans ranging from old-school metalheads to tattooed, bespectacled hipsters who normally shun headbanging.

Wingo suggests that it boils down to the fact that Cronise sings, rather than screams. His voice contains a hint of Ozzy, but it's mostly buried underneath the guitar avalanche. Perhaps the indie rock love is related to the utter lack of irony in Cronise's medieval – and folklore – inspired lyrics.

“Winter's Wolves,” a video that has aired on MTV2 and Fuse, could be the soundtrack to a flame-arrow battle between 10,000 orcs and elves: “I would mount your heads on bloody spears outside your palace gates,” Cronise sings, “and watch as crows peck out your eyes, and your cities are laid to waste.”

Repeat: He does this with zero irony.

The Sword has settled nicely into the “hipster metal” club that also contains groups such as Early Man, Witch and Pelican. But, Wingo and Richie insist, the Sword isn't a contrived act. The band members aren't Austin scenesters, nor do they hang around that Texas city's famous Sixth Street music district. “Most of us are hermits, basically,” Wingo says. “We're not the most socially outgoing bunch of dudes.”

Mostly, the dudes just happen to like Sabbath. And Led Zeppelin. And sludgy riffs with a hint of Southern groove. So pardon the Sword for not taking a stab at the more ponderous questions of the hipster-metal galaxy such as, “Why do people like us?”

A little more than two years ago, the Sword was playing for about 30 fans at Emo's nightclub in downtown Austin. A few months ago, Wingo saw himself pummeling drums on national TV for the first time.