Under the Influence of Giants: Taking Back Control 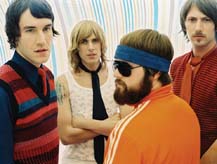 Say retro revival around modern music types and you'll likely find more walking Depeche Mode and Joy Division homages than you can shake a stick at. Under the Influence of Giants are doing a revival of their own, but they're reaching back a little farther to find their roots. The L.A.-based foursome that come from a hardcore and rock background has found a new groove that it's looking to take over the airwaves with, finding inspiration in a time before most of its fans were even born.

“That's what we always strive for, to sound different,” says vocalist Aaron Bruno, who, along with bassist David Amezcua, guitarist Drew Stewart and drummer Jamin Wilcox, aims to prove that white boys have soul too. “We're proud to not sound like anything. A lot of new stuff is coming from the Depeche Mode world and that's definitely not where we're coming from.”

Citing everyone from Michael Jackson, George Michael, Earth, Wind & Fire to Refused as influences, Bruno isn't afraid to list off big names that have helped shape Giants' funk-pop sound. While this sets the band apart from other danceable, new wave purist bands, this also poses its own set of hurdles to jump.

“It definitely made it hard for us to get on tours with bands because we sound so different and I think bands are caught off guard by us,” says Bruno. Somehow Giants made it work and built their way up from unsigned band playing a month-long residency at Club Moscow to a deal with Island Records and a video for “Mama's Room,” the lead single from their self-titled debut, on MTV not long after.

“It doesn't seem real,” says Bruno of their sudden jump in success. “Everything's going so fast, we've been on the road, we went to England and came back and we've been doing smaller headlining dates,” which were then capped off with an appearance on “Jimmy Kimmel,” the group's first network TV appearance.

While in this transitional phase, Giants are just enjoying everything thrown out them, regardless of how small it may seem. “At this stage, it's exciting, whether it's 40 kids or 400,” Bruno says of the band's shows. “Sometimes the shows where there are only 40 kids are the most exciting ones because we didn't have airplay there or anything and this is before MTV started playing the video,” he adds.

“We always had a good live show from the punk rock and underground scene. In that world, it's all about how you perform and not necessarily how you sound,” Bruno says, joking adding, “It's more about throwing your guitar in your friend's face and bleeding on stage.”

Ultimately, Bruno feels their more thrashing beginnings gave them a leg up on competition. “We learned how to have confidence and play good shows before we learned how to write good songs, it was kind of the reverse order of things,” he says.

And for as charismatic of a live show as Giants have now, one might be surprised to learn that Bruno's stage presence was not something he took too naturally. “I never thought in a million years I would become a singer of a band because I was way too shy as a kid and didn't have that kind of confidence,” he says.

Bruno is quite the opposite story these days, however, now wanting to inspire confidence in his listeners the way music did for him while growing up. He remarks, “Any possible thing that can help their day out, if it's a relationship thing, or friends, or just getting you pumped up to talk to a girl you could never talk to before. The bands that I loved growing up almost made me feel like a superhero, like if I would charge myself with a good Beatles or Michael Jackson track. Even now, I listen to music to pump me up before I play a show, depending on the mood I'm in.”

Bruno his learned the importance of being humble no matter how much success comes his way. As former members of signed major label bands, Bruno, Stewart and Wilcox have also been on the other side of the music industry fence, far from the current benefits of fortune's good graces.

“I've learned to be humble through all the ups and downs,” Bruno says. “A year or two ago, some of us were really down and out because we were having a really hard time getting a deal. I went from being in a signed band to trying to figure out what I was going to do. Was I going to go to school? Was I going to get a job? I didn't know what I was going to do. And being 24 at the time, it was really scary. I definitely learned to make the most of every opportunity, because you never know when it's going to be taken away.”

But the Giants are nothing if not vindicated by their determination. “Nobody wanted to give us a second chance, especially with my voice and us sounding the way we do, so we proved it on our own,” Bruno says.

“We're not satisfied until we sell millions of records,” he adds, though his high ambitions are less for monetary profit and more about trying to have a positive influence on listeners. “That's what we want to do, to share this record with as many people as possible. I think it fills a bit of a void that I've felt in music for some time. Not to say that we're the best band out there or anything like that, I just think we made a record that will help a lot of people's days, because it can be tough sometimes.”

And just as Bruno says of the bands who have swayed his musical path, “Why be influenced by anything but the best?”

Under the Influence of Giants' self-titled CD is currently available. UITOG will perform Aug. 9 at the KeyClub, in West Hollywood. For more information, visit www.utiog.com.