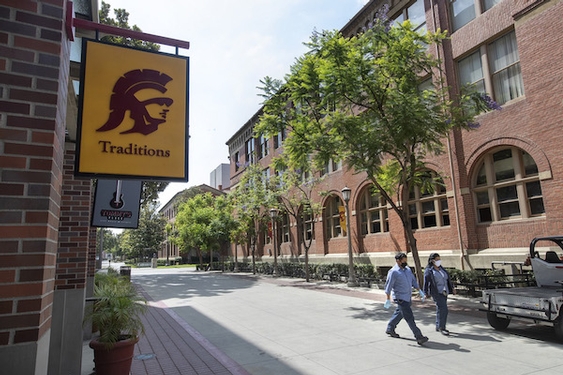 The new freshman class at the University of Southern California is the largest and most diverse in its history, reflecting similar trends in the University of California system and coming as overall college enrollment numbers across the U.S. have declined amid the COVID-19 pandemic.

The university saw a dip in enrolled international students, from 15% in 2019 to 12% in 2020. Meanwhile, the number of California residents who enrolled increased from 39% to 44%.

By comparison, about 3,100 freshmen enrolled in 2019, and 15% were first-generation students, according to USC Dean of Admissions Tim Brunold.

The announcement comes as some recent high school graduates nationwide have made the difficult choice to delay college as they are confronted with the less-than-ideal realities of online education and the economic effects of the pandemic. USC classes remain nearly all online.

Compared with fall 2019, undergraduate student enrollment declined 2.5% nationally, while graduate students are up 3.9%, according to the National Student Clearinghouse Research Center.

The University of California, with its nine undergraduate campuses, also offered admission to its most diverse class ever and to a record number of students: 119,054 freshmen, up from 108,178 last year. Latinos slightly eclipsed Asian Americans for the first time, making up 36% of the 79,953 California students offered admission. Asians made up 35%, whites 21% and Black students 5%. The rest were American Indians, Pacific Islanders or those who declined to state their race or ethnicity. About 45% were the first in their families to attend a four-year university.

USC offered admission to 2,000 more students than it did in 2019, or 9,600 in all, in anticipation that the coronavirus crisis could affect enrollment numbers, Brunold said. Of those students offered admission, 36% accepted — down about 2% from last year. USC granted about 75 requests to delay enrollment.

“When colleges do this work of managing enrollment, we are basically guessing the behavior of 17- and 18-year-olds,” Brunold said.

In recent years, USC has doubled down on efforts to expand its diversity, in part by increasing financial aid and widening access for students from financially disadvantaged backgrounds. In February, the university announced that it would eliminate tuition for families earning $80,000 or less annually and would no longer consider home equity in financial aid calculations. The benefit is available to California residents and students from other states, but not international students.

Brunold said this new program, combined with deliberate efforts to recruit students of diverse backgrounds nationwide, contributed to the increased diversity of the class of 2024.

USC increased its tuition by 3.5% for the 2020-2021 academic year despite the switch to online instruction. Undergraduate tuition costs $59,260 a year.

The campus ranked 10th among 65 elite universities in the proportion of students in the bottom 20% of family income, according to research on the class of 2013 by Stanford University professor Raj Chetty and others.

The six high schools sending the most students to USC are all public, according to university officials. Foshay Learning Center, a Los Angeles Unified School District school less than a mile from the USC University Park Campus, tops the list with 25 of its recent graduates attending USC.

Foshay is one of three schools in L.A. that participate in USC’s Neighborhood Academic Initiative, a seven-year, college-aimed enrichment program that promises a free ride to college for students who get in. Eleven students from the program’s first graduating classes in East Los Angeles also are attending USC this year.

Sulara Merghani, a daughter of Sudanese immigrants and a first-generation college student, went to Foshay from sixth to 12th grade. She considered offers from Chapman University and UC San Diego but ultimately chose USC because it offered the best financial aid package. And being from South L.A., she wanted to be closer to home.

Merghani said that she had to push herself to go to college. In Sudanese culture, women do not typically seek education, she said. She has three older siblings, and just one graduated from college. “Why should I?” she would sometimes think. But Foshay motivated her to follow through, and the USC offer sweetened the deal.

“It’s an achievement not just for me,” Merghani said, “but also for my family.”