Channing Tatum: Steps it Up in Step Up 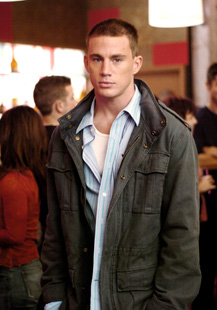 Asked how his new dancing movie Step Up sets itself apart from films like Honey , Take the Lead and Save the Last Dance , star Channing Tatum gives a refreshingly honest answer.

“I don't know if we're exactly trying to separate ourselves,” he explains. “I don't think we were ever really trying to like, ‘Oh, we're going to break ground with this.' Dancing movies are good because they have a formula, and you love them for a reason.”

In Step Up , Tatum plays Tyler Gage, a hood from the bad side of Baltimore. A veteran of club dancing, Tyler discovers a purpose to his life when he meets Nora (Jenna Dewan), a classically trained dancer at the Maryland School of the Arts. Their partnership goes from professional to romantic, confirming Tatum's suggestion that Step Up sticks to the formula. He notes, though, that there's one big difference.

“But I think, if anything, if I had to pick a special thing, one, we do all of our own dancing,” Tatum boasts. “There's not one take in this whole movie that we're not doing our own stuff. Not one. We didn't even have dance doubles, much less us not do it.”

Tatum is probably best known for his work opposite Amanda Bynes in She's the Man , as well as a featured role in a series of Mountain Dew commercials. Like Tyler, Tatum knew how he danced when he was out with friends, but it was a very different thing to first meet with Step Up director Anne Fletcher, one of the medium's most successful choreographers.

“She's the elite of the elites in this whole industry, and even in the dance world,” Tatum raves. “Not even just in the film. Everyone knows her. She's ‘Mama.' That's what everyone knows her as in the industry. And going in and auditioning for her dancing was a huge thing for me, because I'm pretty insecure about my dancing, because I had never been trained before. But I know what I like to do, sort of thing, and it's kind of like you painting and someone looking at your work and like ... I don't know, whether they trash it or whether they like it.”

Apparently, Fletcher liked it, because Tatum was the first actor cast in the Disney project, giving him time to get some practical hoofing skills.

“It's two things learning something – your body has to learn something and your mind has to learn something, and you've got to connect the two sometimes and one of them always remembers it more than the other,” Tatum muses. “And just getting them to work together is like the big key. And then aside from that, you learn it in like a closed environment, like in a dance studio by yourself, where it's just you and [your choreographer]. And then they throw you out in front of people, and you're like, ‘You all are going to be here while I'm doing this?' And it's kind of like, ‘Whoa.' It's different than going and dancing in a club.”

While Tatum got the basic steps down, took a lengthy audition process to find Dewan, a veteran music video dancer and a genre veteran, having appeared in Take the Lead . Tatum gladly admits he learned some important lessons from his partner.

Step Up is currently in theaters.