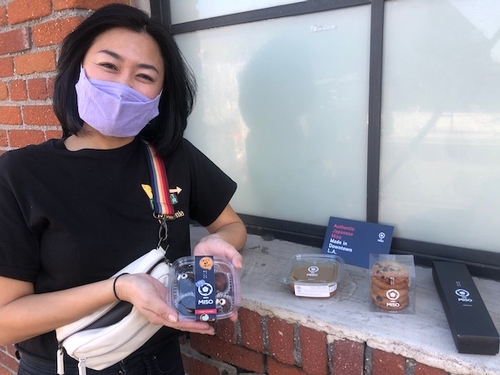 Omiso's Ai Fujimoto outside of Crafted Kitchen in DTLA with her signature miso selections.

In 2011 following stints as a Japanese translator in the Middle East and Europe, Ai Fujimoto worked her way to California and settled in Downtown Los Angeles. It was around this time that the micro-brewery movement was taking off in Southern California, and Los Angeles became the hub of the movement. Fujimoto worked near a local brewery and took an interest in the brewing process, especially the key component of fermentation. She devoured books and Youtube videos to master fermentation techniques that she would test out in her apartment using soy sauce. Eventually, the Millennial from Kyoto, Japan would find herself transitioning into the next phase of her life as an entrepreneur. Fujimoto decided to go into the miso business.

Most Americans order miso soup at their local sushi restaurant or buy a box of dry soup packets at the grocery store. Often American consumers don’t pay attention to how miso is made; however, in Japan, miso has a long and rich history. It has been around for thousands of years, and there are variations of it based on the region where it comes from as well as the climate in that part of the country. For example, miso in Kyoto where Fujimoto hails from, has a sweeter taste than in other parts of the country. It also has a lighter auburn tint because of the ingredients available in that region as well as the traditional duration of fermentation that people use when making it.

The process of making miso paste begins with mixing cooked soybeans, salt and water with rice that is covered and inoculated with a mold called Koji. The resulting natural process that takes place aka fermentation breaks down the rice from a complex carbohydrate to a simple sugar. The type of Koji being used in this process will determine the fermentation speed and the flavor outcome. Companies that mass produce miso tend to use techniques that speed up the fermentation process. However, Fujimoto uses a more natural brewing technique where the fermentation duration of her batches are based on the climate where it is being produced (Southern California) as well as the American Koji that she uses during the process. In order to make her miso batches, Fujimoto rents out space at Crafted Kitchen, a shared use commercial kitchen located in the Arts District of Los Angeles. She currently sells her miso products online under the brand Omiso and at select retail outlets in the L.A. area.

Omiso’s signature product is its miso-dama or instant miso soup ball, which is made using a variety of Southern California produce. Each ball is comprised of a miso paste rolled into a sphere that is coated with a variety of ingredients.  The Omiso Instant Miso Soup Balls (5pc Gift Box $22.00) includes: 1 Italian garlic miso paste ball, 1 Aosa Nori Seaweed, 1 Pink-peppercorn, 1 Tororo Kelp and 1 Yuzu Sesame miso ball. The miso balls are beautifully packaged similar to a high end candy box. To use, you simply place a ball  inside a bowl, pour 7 ounces of hot water over it and break it with a spoon until it dissolves. It’s delicious, healthy and a quick prep superfood to eat while working or studying.

In addition to the 5pc Gift Box Miso Ball Set, there is also a 3 piece box ($13.00) and a 5 piece deli pack ($17.00).  The Yuzu Citron Miso ($12.00) is a must purchase. This sweet and savory condiment can be used as a dipping sauce for vegetables, a bread spread or a marinade for chicken and fish. You can also purchase Instant Miso Soup Paste (Yellow or  Red - $17.00) to use as your base for your own miso soup. For desserts, Omiso offers popular chocolate chip cookies ($9.00) as well as banana and walnut miso muffins ($10.00). Both are vegan and gluten free.