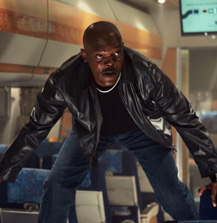 There are two ways most people react when they hear about Snakes on a Plane , complete disbelief or sheer delight, and that suits both the star of the movie, Samuel L. Jackson, and its director, David Ellis, just fine.

“I did this movie because it was the kind of movie I would have gone to see when I was a kid,” says Jackson, dressed in Snakes on a Plane promotional clothing including a black T-shirt, custom white Kangol hat and two necklaces.

“The [expectations are] split between the fans that really want to see the movie and the other … people that want to see the movie [who] think that it's going to be the best, worst movie they've ever seen,” says Ellis, who adds that the movie isn't going to be just a good, bad movie. “If you get a movie about snakes being unleashed on a plane and you have a phobia of flying and you have a phobia about snakes, this movie definitely delivers.”

It's been awhile since a movie title really described so accurately what it was about, and there's no getting around the title for this one. It really is about snakes on a plane, but to elaborate a bit more the full plot goes something like this:

FBI agent Neville Flynn (Jackson) is charged with transporting a young man who witnessed a mob hit from Hawaii to Los Angeles. To retaliate, the crime boss facing prison time loads hundreds of poisonous snakes on their flight in a crate set to time-release halfway over the Pacific Ocean. The crate also releases a pheromone into the air to agitate the snakes, who start attacking passengers one by one.

Ellis feels those who are on the fence about the movie will likely see it.

“They're going to check it out to see if we deliver a thrilling, exciting movie about snakes on a plane with a hero like Sam Jackson that takes itself seriously. There's a lot of people that die on the plane and a lot of people that are in a really screwed up situations, but at the same time they bond together and fight for a common goal, which is survival. And at the same time, you've got some fun humor in it,” he says.

Fan interest in the movie has been generated on the Web for months. It reached a fever pitch in July during Comic-Con, where 10 minutes of previously unseen footage was played to a packed auditorium.

“I knew from maybe the first week of shooting [about] the interest in the film and how a lot of people felt the same way I did,” says Jackson, referring to the negative reaction to changing the film's title from Snakes on a Plane to Pacific Flight 121.

“Then the other stuff started to happen,” with fans submitting poster artwork, song ideas and homemade movies, Jackson continues. “I was pretty aware of it and I started talking to my managers and agents about it and everybody started tracking it.”

Ellis is rewarding the fans for their support by not screening the film for critics. “I thought it was right to give it to the fans first, which has pissed a lot of people off, which I'm sorry about, but I just felt that they're the ones that generated all the stuff on the Internet … They should be the guys that get to see the movie.”

If Snakes on a Plane does well it will be largely due to Jackson, who has a huge fan following for his roles in Pulp Fiction and the Star Wars franchise. Jackson says he took the job simply to have fun.

“All movies aren't fun, some are hard work. [This is] a popcorn movie. We know what it is. I don't have to go in and worry about my motivations – fucking snakes all over the plane. That's scary.”

Jackson actually had little contact with the live snakes during filming. “We had all the rubber snakes and the CGI snakes,” Jackson says. “The second unit had the real snakes. They did provoke the poisonous snakes on second unit. We would watch that on a monitor. They had an albino cobra on second unit that they had striking a seat one day. Frightening. Very frightening.”

The movie's fear factor convinced the studio to make it R-rated, especially after they saw the PG-13 version, Ellis says.

“It was an R-rated film when I signed on,” remarks Ellis, but the studio wanted to target a broader demographic. “They decided it had to be PG-13 and we made that movie, delivered that movie to them and when they saw it, they immediately said, ‘Okay, we get it. It's got to be an R' so they gave me the money to go back out and shoot for five more days and increase the nudity, increase the violence and the gore and how people get killed.”

Snakes on a Plane releases in theaters August 18.