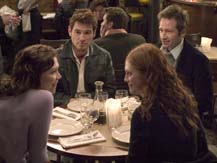 A handful of talented actors become the victims of an under-baked premise and poor screenplay in Trust the Man , a droll “comedy” written and directed by Bart Freundlich ( World Traveler ).

The film, which is set in New York City, follows the everyday lives and relationship issues, of two separate – albeit intertwined – couples. The first couple consists of Tom (David Duchovny) and Rebecca (Julianne Moore), a former ad exec-cum-house husband and his actress wife, who have a couple of kids, a nice apartment and quite a few intimacy issues. Couple number two is Rebecca's slacker brother Tobey (Billy Crudup) and his long-time, live-in love, aspiring novelist Elaine (Maggie Gyllenhaal).

As the story begins to unfold, the audience instantly learns that Rebecca is debating trading big-screen roles for a shot at the theater and, at the same time, never wants to have sex with her hubby. Tom is frustrated by this and, despite his formerly faithful nature, begins an extramarital affair with the mom of one of his son's grade-school friends.

At the same time, and through constant dinners and conversations with Tom and Rebecca, the audience also learns that Elaine is frustrated by Tobey's non-committal nature, and the fact that he's always thinking about death. She eventually kicks him out, and begins soul-searching in order to find her true self.

While each member of the two-couple cluster seems to have a lot of pressing issues, no one character stands out and, as a result, no one seems to be all that interesting. Sure, it sucks that Tom is cheating on Rebecca, but we don't have insight enough into either character to truly care.

And while Elaine is sweet, the character is underwritten and therefore it's no big deal to us whether or not she finds herself or a home for her novel. And lastly, Crudup's portrayal of Tobey is so utterly kid-like and annoying that, instead of giving him more of a story, we just wish that his character would give up on Elaine and leave the movie itself altogether.

All in all, these talented actors are stuck in a movie where they are unable to achieve their true range. The film seems unnecessary and, at times, tedious. By the end, we feel as though we've spent two hours emptily gabbing with these people, rather than gaining insight into their lives or troubles.