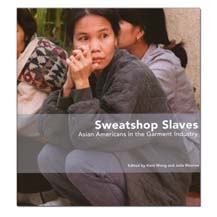 On Aug. 2, 1995, state and federal agents raided a garment factory in El Monte, Calif., where 72 Thai nationals worked and lived in near slavery conditions. The workers toiled for $2 an hour in an apartment complex surrounded by barbed wire.

The case sparked national discussion about the garment industry.

And, in the case of nine students at UCLA, it spawned an idea for a book.

The result is Sweatshop Slaves: Asian-Americans in the Garment Industry , published earlier this summer.

“I didn't learn about the El Monte raids until college,” says Justin Miyamoto, a biochemistry major who wrote a chapter on legislation targeting abuses in the industry. “To learn injustice is so close and so rampant is appalling.”

“Many of them had grown up their whole lives in the Southland and many had no idea these conditions existed,” says Kent Wong, director of the UCLA Labor Center. “It is quite an accomplishment to have a publication under their belt before they leave school. Many talked about how they would go shopping at the Gap and Banana Republic and never thought about who made the clothes or where they came from. Now, every time they go shopping, they think about the hands that went into this garment.”

The greater Los Angeles area is the center of the North American garment industry. More than 1,000 manufacturers employ an estimated 90,000 workers, most of them immigrants.

A U.S. Department of Labor survey of the L.A. garment industry has revealed that 67 percent of garment shops violated minimum-wage and overtime laws. The survey was released in 2000. It also found that 98 percent violated health and safety laws and an estimated $80 million was owed in back wages each year, according to the book.