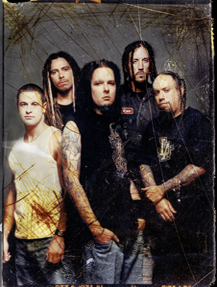 When five guys from Bakersfield, CA – Jonathan Davis, James “Munky” Shaffer, Brian “Head” Welch, Fieldy and David Silveria – first got together to practice their tunes in a hot, dirty garage, who would guessed that more than a decade later, they would have changed the landscape of rock music?

The members of Korn had a good idea, having spent two years playing “insane shows” garnering fans as rabid as the mosh pits they inspire, leading to a signed contract with Immortal Records.

Jonathan Davis, singer and frontman for Korn, has described their 1994 self-titled debut album and 1996’s Life Is Peachy as “straight, f**kin’ cathartic rage” – albums from a band who unwittingly found itself leading a new genre of metal-infused rock music. Listeners connected with the pain and aggressive rants in Davis’s lyrics, flocking to Korn shows to witness the intense emotions behind their blazing live performances.

Six albums and numerous hits later – including “Got The Life,” “Freak On A Leash,” “Here To Stay” and their newest, a Cameo cover of “Word Up” – Korn has released Greatest Hits Vol. 1.

Campus Circle talked with frontman Jonathan Davis about a long and varied career, from terminally ill children to serial killers, and everything in between.

In 1994, Korn put out its self-titled debut album. At what point did you notice the band taking off and developing a strong fan base?

Jonathan Davis: We knew we were starting to get a fan base as soon as we started playing, long before we got signed. The first time we played, we played for 12 people, and the next time it would be 50 people. It would just grow; word of mouth was going.

We finally started touring nationally, our first tour being with Biohazard and House of Pain. When we started playing, the crowd went insane. We knew we had something. We just worked really hard, and after a year’s hard work, we went platinum.

You play the bagpipes. Of all the instruments to play in the rock world, why did you choose the bagpipes?

Davis: My grandmother was of Scottish descent so I grew up listening to pipe albums. The thing that put it over the top for me was when I watched the “Star Trek” [episode] when Spock died and they were playing “Amazing Grace” on the pipes. I said, “I gotta learn how to play that instrument.” I started when I was 16 years old.

1998’s Follow The Leader was Korn’s breakout album that eventually went multi-platinum. What are your memories from that time?

Davis: I was a drunken fool, the most I’ve ever indulged in my life. When we wrote it, I was constantly drunk, constantly on cocaine … it was just ridiculous. I was trying to live up to the expectation of a rock star, living larger than life. But once you start doing it, you’re hooked and it’s bad news from there. You get sucked in; it’s stupid and it’ll kill you. So after that album [was finished], I became sober.

On Follow The Leader, you wrote the song “Justin,” which is about one of your fans. Tell me about that song.

Davis: He was just a kid we met through the Make-A-Wish [Foundation]. He was dying of stomach cancer. It was the first time someone’s dying wish was to come meet us. I didn’t think we were that important. That someone’s last wish was to meet me and the band really moved me and inspired me, so I wrote the song about the kid. His name was Justin.

He asked if we would play “Clown” which was his favorite song. And when we were playing it, I watched him cry. It killed me when he passed away. I wanted to keep his memory going so I wrote that song about him.

Since then, I’ve gone and done tons of Make-A-Wish things for fans that were dying. At least I can make them feel better and then let them go in peace. It feels good.

What memories come to mind when you think of “A.D.I.D.A.S.” from Life Is Peachy?

Davis: I remember my son being about six months old and between my legs when I sang that song, sitting on the ground. If you look on my liner notes it says, “Additional vocals by baby Nathan.” He was cooing.

How old is Nathan now? He must be a hero at school.

Davis: He’s nine now. He came out this summer with me on the Projekt Revolution Tour for two weeks. At his school, his best friend is Nikki Sixx’s son – and this is kind of crazy, but cool – when I was 16 years old, I had a Motley Crue birthday cake! It’s totally surreal. It’s funny how life is.

What are you memories of “Falling Away From Me” from your fourth album, Issues?

Davis: I remember playing that song at Woodstock. I didn’t even have words – I just started freestyling. I had the melody in my head already but hadn’t gotten around to writing the words yet, so I just faked it. It was pretty funny.

Why did you decide to play a song that you didn’t have words to?

Davis: ’Cause it was good.

You have a fascination with serial killers and murderers. Does this stem from your former work as a coroner’s assistant?

Davis: I’m just intrigued by the dark side of human nature. You know, the criminal aspect and what people will do to people. It’s not necessarily that I agree with what these people do. They kill people and I’m not into that at all. It’s [about] what makes them do it. I collect things from the occult, dark objects – those things inspire me and intrigue me.

What are your more unusual or favorite items?

Davis: My favorite item would probably be the (Ted) Bundy Volkswagen I got. It’s the car that he killed over 50 women in. “The Hillside Strangler,” Kenneth Bianchi, I have some amazing art of his. He painted this guy holding a sphere with a devil in it, killing someone. It’s crazy. He didn’t do that much artwork, so it’s very rare to have that.

Tell me about the inspiration behind “Y’All Want A Single” from 2003’s Take a Look in the Mirror?

Davis: That just came together, us being in the studio, pissed off and our management and record company telling us that they need a single. You know, the whole fuckin’ spiel. We were sitting around talking shit and the hook came up. We all wrote the hook together, and then wrote a song around it. It was funny. A lot of people react to that song and love that song.

Korn has put out a total of six albums, the seventh being Greatest Hits Vol. 1.Which album would you say is the fan favorite and which is your personal favorite?