The Dan Band: Has the Ladies Covered 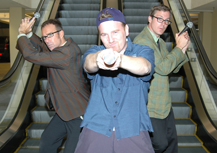 In the case of actor and The Dan Band frontman Dan Finnerty, it was a drunken night of karaoke that mistakenly turned him into L.A.'s ultimate man-diva.

Since belting out a foul rendition of Helen Reddy's "I Am Woman" in a Toronto bar in 1998, he's translated his performance into musical career that now, eight years later, still continues to puzzle him.

“It wasn't supposed to happen this way,” he explains. “But it's the best mistake I ever made.”

Oddly enough, one thing led to another. A musician friend of Finnerty's wife actress Kathy Najimy, who'd seen the karaoke gig, asked him if he would open one of her shows in LA.

“She wanted to make it seem like she was the headliner, so I was like, ‘what the hell,'” he says. “Some guy came up to me after that show and asked if I had a flier, I said, 'A flier for what?' He said, 'Your next show.' He wanted to book me at the Viper Room, so I got a band."

Today, the trash-talking crotch-grabbing Finnerty in his mechanic getup has taken karaoke to a whole new level. He's added a pair of business-suited backup singers, and a repertoire of female power anthems, which continue to entertain legions of die-hards fans of the act.

“It's funny how the thing you least care about, is the thing that turns out to be your biggest success,” Finnerty says.

His cover band bit has given his part-time acting career quite a push.

It was Finnerty's performance in a Los Angeles club that caught the attention of director Todd Phillips, who cast him the Will Ferrell comedy Old School , in which an overly dramatic wedding singer performs Bonnie Tylers “Total Eclipse of the Heart.”

His on-screen appearances have in turn, increased The Dan Band's word-of mouth-only fan base.

His debut album, The Dan Band Live! is a good sampling of what he's all about. Highlights include an Abba cover, “Shoop / Whatta Man / Never Gonna Get It," medley and Alanis Morrisette's “You Oughta Know.”

While after a quick listen to the Dan Band, it may seem as nothing more than a big joke, and truthfully, it did start out like that. But Finnerty admits an honest admiration for the songs he covers.

The real appeal however, is the live show, which features dirty yet humorous girl covers that are full of twirls, spins and shimmies.

“I basically took my moves from all the ‘80s music videos I could steal,” Finnerty says. “The lamer it is, the funnier, it is.”

Considering the bands cult-like following, it may seem as though the band hasn't faced its own share of adversity. Finnerty, however, recalls many moments where the audience didn't seem to “get it.”

“At an L.A. show one night, there was a drunk guy in the audience, completely wasted, apparently, with no clue as to why he was there, yelling faggot repeatedly to me onstage,” he says. When I'm put on the spot, what do you say to something like that? So I responded with ‘you weren't saying that when you were sucking my dick backstage before the show.'”

It is that crude sense of humor that will be released in the form of a Christmas album this November, full of Dan Band originals, in the same vein as his “I Want to Rock You Hard This Christmas.” And with a part in Parental Guidance Suggested —a Scary Movie -type spoof on teen sex— to be released this fall, we are bound to see even more of Finnerty's sickly entertaining sense of humor.

“I owe it all to drunk karaoke,” he says.

The Dan be will be performing on Friday, Aug. 18 at the House of Blues, Anaheim. For more information, visit www.thedanband.com .