The Top 25 Countdown: Begins With No. 4 Southern California 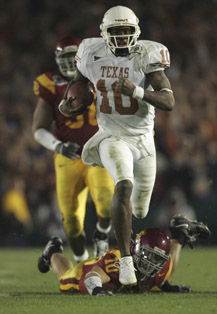 Why USC is No. 4: Several talented and decorated players are gone, but the roster is full of talent. It's just inexperienced, unproven and (as yet) undecorated.

Starters returning: 4 on offense, 6 on defense.

Best-case scenario: Booty lives up to his promise as a big-time quarterback, a go-to running back emerges and the offensive line jells into a dominating unit.

Worst-case scenario: The offense sputters because of so many new parts and the secondary is unreliable and gives up too many big plays.

Bottom line: Despite losing their big stars, the Trojans are talented enough to be in the championship hunt the entire season.

In 2003, John David Booty made headlines when he graduated from Evangel Christian High School in Shreveport, La., a year early and enrolled at USC. Instead of playing his senior year as a prep, he was trying to beat out Matt Leinart.

With Leinart finally in the NFL, Booty will try to make some game-related headlines this season. Despite missing spring practice with back problems that required surgery, the 6-foot-3, 195-pounder is considered the favorite to be the Trojans' starting quarterback this season.

"John David has been in the program for three years now, and he has game-time experience that really is of value," USC coach Pete Carroll said. "We know what he knows. He gives us the confidence that he's going to be able to get this done."

The Trojans have enough quality linebackers to provide starters for themselves and two other teams. USC's defensive line, though, has some holes to fill.

The possible solution? Using some 3-4 defensive fronts that would utilize sophomore linebacker Brian Cushing as the "Elephant." The term was used by the San Francisco 49ers when Charles Hailey was the "elephant man" in a 3-4 scheme, which had a hybrid pass-rushing defensive end/linebacker.

Starting with the 41-38 national championship game loss to Texas in the Rose Bowl, 2006 has not been the Trojans' year:

Wide receiver Dwayne Jarrett was suspended by the NCAA (but recently reinstated) over not paying market value rent on an apartment he shared with Matt Leinart.

Heisman Trophy-winning running back Reggie Bush, who skipped his senior season for the NFL Draft, was involved in an investigation that his parents received money from an agent while Bush was still at USC.

Redshirt freshman quarterback Mark Sanchez was charged with sexual assault of a female USC student. The charges were eventually dropped.

Brothers Brandon and Ryan Ting announced they were leaving the team amid rumors they had tested positive for steroids.

Pete Carroll on replacing the past two Heisman Trophy winners (Matt Leinart and Reggie Bush), plus several other starters: "That's the challenge each year in college football, how well you can replace good players. We've shown that we're very capable of doing that. I don't see it being any different this season."

Freshmen running backs Emmanuel Moody (Coppell High) and Stafon Johnson should see playing time at tailback. Moody chose USC over Texas. Freshman wide receiver Vidal Hazelton has size and speed. He could be a factor as a third receiver. Freshmen Antwine Perez and Taylor Mays could see action at either safety spot.

No fear: The Trojans aren't taking the easy way out. The three non-conference games_Arkansas, Nebraska and Notre Dame_are challenges (USC plays the Razorbacks in Fayetteville).

Key game: California. The Bears are solid contenders for the Pac-10 title and they believe they can play with the Trojans. The Nov. 18 game could decide the Pac-10 championship.

Visit the Star-Telegram on the World Wide Web at http://www.star-telegram.com.