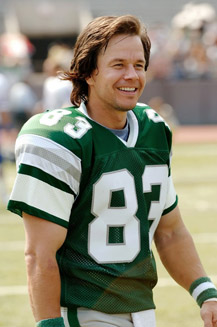 Relentless but patient pursuit of the American Dream is the “heart” of Invincible – a touching and inspirational tale of perseverance, passion and belief in oneself. In the film, Mark Wahlberg plays Vince Papale, a small-town guy with an untapped ability and talent in football who beats the odds by making it into the NFL.

“It's certainly a very inspirational story,” Wahlberg says. “I was fortunate enough to have gotten to know the guy [the real-life Papale] away from his football accomplishments. I looked up to Vince the man as much as Vince the football player. He's just a great guy, everything about him is good and positive.”

In order to understand the multitude of factors that influenced Papale and his pursuit of football, Wahlberg researched his character's life, his family and his career. “I'm a big football buff and I didn't know the Vince Papale story until I was sent the script. Then I saw a 90-second piece that a friend of his had produced for NFL films and was blown away,” he says. “It was an amazing story.”

Wahlberg knew the integrity of the story rested on showing Papale's perseverance, so the actor decided to portray him as a disciplined athlete who played “by the rules.”

“It was really hard [to play tall and tough (laughs)] but that was the only way, in my opinion, to make the rest of the movie work, you know, as a guy who's trying to make it in football. If that didn't work, if the football didn't work, I'd be out of the theater. I had to go in there and make it real,” says Wahlberg, adding, “When I went in, I told the guys, ‘I wanna make it real, approach it like I'm a guy who's trying to make the team, trying to earn their respect – which took a while.'”

With the necessity of an emotionally successful portrayal of Papale, confronting the physical demands of the role required a great deal of practice and stamina, especially since Wahlberg wanted to deliver an honest and realistic performance.

“It took a lot of running, a lot of exercise. I was banged up and sore everywhere,” he says. “But they did a good job of piecing you back together, whatever they had to do – ice and ibuprofen, a little spit-and-glue … Because obviously they wanted you back on the field; they shut down the production for a day or a couple of days only.”

Preparing for the role physically was such an important part of the character and, according to Wahlberg, his work was cut out for him from the start because he did not fit Papale's body shape.

“I was just too heavy. I had done the [Martin] Scorsese movie (the upcoming The Departed ) and I had put on a lot of weight for that, because, you know, Marty wanted me to get as buffed up as possible,” Wahlberg says. “So, by the time I showed up [for Invincible ], I didn't look like a lean or wide player even from the seventies; obviously football players look a lot different now. Vince was a lean, fast guy; he was a track guy. He didn't lift weights and he wasn't a college football player or anything. So, it took a lot of running … And I just stopped eating all that Italian food in New York.”

The fact that Papale and Wahlberg come from similar backgrounds also helped the actor better understand his onscreen counterpart. “We're more similar than not,” says Wahlberg. “We're both blue collar, regular, neighborhood guys. I was extremely involved with the movie, during shooting and casting. My co-star [Elizabeth Banks] has a huge career ahead of her and [Greg] Kinnear is great as coach. I couldn't imagine any other actor in that part. So, I lived his life and knew where he was coming from.”

Overall, Invincible is a moving depiction of human will and discipline in the face of obstacles. Papale endured the disadvantages of humble financial resources, interrupted and inconsistent family care and an uncertain future altogether – only to achieve his dream. Wahlberg brings a winning combination to a film about the relentless but patient pursuit of the American Dream.