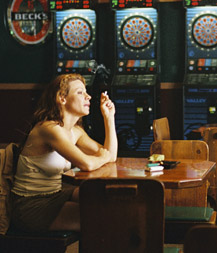 As anyone who's been watching films during the past 20 years can attest, Lili Taylor is no slouch when it comes to tackling roles that many actresses would rather avoid. This month, the actress returns to the screen in Factotum , a film based on Charles Bukowski's novel of the same name.

Directed by Norway's Bent Hamer ( Kitchen Stories ), Factotum follows Bukowski's alter-ego Hank Chinaski (Matt Dillon), a self-destructive aspiring fiction writer who can't get published, though he can get fired (and does so multiple times throughout the story). An unrepentant boozehound, Chinaski crosses paths with other barroom regulars like Jan (Taylor), whom he almost instantly moves in with; and neon-lit, alcohol-addled misadventures ensue.

In the film, Taylor morphs deeply into her character, which is a far cry from the pizza-slinging nymphet she portrayed in Mystic Pizza . In fact, the humor in this film is dry and dark, which might make one wonder what the atmosphere of the 24-day shoot felt like on set.

“It was actually the perfect atmosphere for this type of movie,” Taylor recalls. “There was very little money and very little time and so there was a great [ esprit de corps ] – everyone that was there was working really hard and wanted to be there. It had a rawness to it that's similar to one of the essences of Bukowski and it had an impulsive, extemporaneous feeling as opposed to any of that [formulaic] stuff which would've just not been appropriate to Bukowski's essence.”

Dillon, fresh off of an Academy Award nomination for his turn in Crash , has also enjoyed an assorted array of roles in his career. Here, Taylor reveals what it was like sparring with the actor in front of the cameras. “I've known Matt for a long time and so he felt very familiar to me,” she says. “But it's neat being with him right now because he's just coming into himself so much as a man and as an actor and it was really neat to be a part of that, to witness it firsthand.”

A complaint commonly heard from brand-name thespians is that they'd like to get offers that would yield a wide-ranging body of work, but few manage to consistently do so and instead resort to taking the money and running with phoned-in, paycheck performances. Taylor, on the other hand, has been honing her craft professionally since she was 17 with a creative balance of working the boards onstage while appearing in both independent and big-budget films. So, what's her secret to finding fresh, challenging material?

“The director,” she says point-blank. “The director's the main thing that's helped make my [choices in roles] so varied because I haven't really had a ‘plan,' per se. For me, ‘plans' cannot turn out the way I was hoping ... and they can get a little bit narrow or close off other options. So, the most important thing has always been the director – I've had some rich, deep experiences, beyond what I could've imagined for myself.”

Bearing the latter in mind, Taylor quickly points out the fact that she didn't exactly hit the ground running. “It took a few years because I was young and didn't have a lot of experience,” she says with the dimpled grin that's become her signature. “It took a risk of starting to say no and realizing that no is a complete sentence. By saying no enough, your actions are going to speak loudly and people won't [continue to] come to you with stuff, so it kind of started to work itself out.”

“Some people never go crazy. What truly horrible lives they must live,” Bukowski once wrote. And, to be certain, his writing is not for the socially squeamish. Simply put, he didn't write for acceptance. But, the author's short stories and poetry have influenced people from all walks of life, all over the globe – Taylor included. She reveals as much when explaining the writer's initial effect on her as a teenager.

“After [Bukowski's writings] got me to where I needed to be, I was able to put them down for a while,” she says, concluding, “It's nice to be able to pick him back up now, and I think that [after seeing Factotum ] other people might, too, because he's worth looking at.”

Factotum is currently in select theaters.