Revving it Up: Flirting with other Motorists May Put Passion Back in High Gear 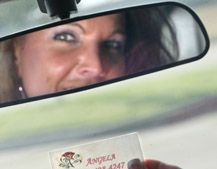 The highway has become the next stop on the Internet dating scene. A free Web site, Flirtingintraffic.com, debuted six months ago as a way to link people who catch each other's eye while passing by.

“The hook is that someone can meet you instead of never seeing you again after the light changes,” says Jennifer Litz, 24. A blogger, Litz was chosen last month from hundreds of candidates to be the Web site's flirting expert.

Site visitors can complete an online biography and upload a head shot. They will get a Flirting ID that can be printed on an oval bumper sticker. Drivers can flirt from behind the wheel or take it further by jotting down the ID and getting acquainted online.

Some people groan at the notion, seeing flirting as one more driving distraction on a list that includes chatting on a cell phone, watching television, applying makeup and eating. And law enforcement officers say it might attract someone dangerous.

But Litz says the flirting can be subtle – “don't hang out the window and wave” – and relatively safe because people initially communicate on the Web site rather than by personal e-mail. The site had more than 1 million hits in June and has pulled in 7,500 members nationwide.

People can tell immediately whether they feel the “spark” many consider crucial to a relationship, Litz says. The approach is more efficient and realistic than wading through old photos some people post on dating sites or trying to make conversation in a bar.

Some romance seekers prefer to flirt in traffic without a Web site as a go-between. A month ago, Angela Clements printed cards with her first name, her phone number and a picture of a rose printed in pink. She has given cards to about a dozen men.

“It's all about multitasking,” says Clements, an executive assistant who works in telecommunications. “I figure this is utilizing your time.”

Clements says her direct approach has led to pleasant dates.

But some guys erroneously figure, “fast car, fast girl” when they spot her silver Pontiac G6 with a sunroof.

Some people are unnerved by in-traffic overtures, among them Matt Hurd, 31.

While in his truck at a stoplight, he spotted a woman looking at him in her side-view mirror.

“I could see her mouth moving and thought she was cussing at first,” he says. “I drove fast and passed her, but she weaved in and out of cars to get to me. She rode my bumper, then pulled up and kept pace with me. I had to look over, and then she did the phone signal.”

He pulled over, and she handed him a card with the message “Wanna Be Friends?” and her name and phone number.

“It alarmed me,” he says. “I thought maybe she wanted to lure me to her lair so she and her husband could kill me.”

A flirt might be Mr. or Miss Right – or a stalker or worse, he says.

Clements says she insists on meeting a man in a public place. She does not hand out her cards after dark.

Sometimes, her prospects are puzzled.

“One guy just thought I was trying to tell him he had a flat tire,” she says.

But Litz says the confusion will clear up as the word gets out.

“If you like the person's looks and have made that initial eye contact and they haven't tried to road-rage you, maybe at the second light you can maintain the eye contact and see if you can get some kind of banter going without crashing,” Litz says.

“If you can do that, that bodes well for your future communication.”