The Panic Channel: Where Art and Entertainment Collide 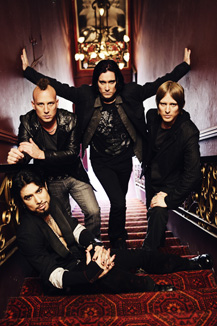 If you take a fiercely pursued '80s rock band, pull out Perry Farrell and insert an ex-MTV VJ, what do you get? The mix results in the Panic Channel, a highly energetic power rock band with melody and storytelling as the driving force behind its success.

Made up of guitarist Dave Navarro, bassist Chris Chaney and drummer Stephen Perkins, the former Jane's Addiction lineup was not looking to form a band in the beginning. Navarro called longtime friend Steve Isaacs to come jam with the guys, throw around ideas and lay melodies down on some songs – which Isaacs excels at.

“It was a mysterious, from the ether opportunity.” Isaacs says, “For me it was just a really exciting Friday night.”

After his stint as an MTV VJ and lead role as the Pinball Wizard in the Who's “Tommy,” Isaacs was more than happy to join the guys to form TPC. With its new addition, TPC was set to evolve as a band.

“Without it being scattershot there's something for everybody,” Isaacs says. “I love music with power and melody and I think we cover those bases real well.”

Recently signed to EMI/Capitol Records, the foursome was asked to redo its self-recorded album, (ONe). This isn't something that occurs often but rather than taking an emotional dive, TPC took it as a blessing in disguise.

“I look at it as a luxury because we really got to put a lot of time into it and refine songs that we pretty much thought we had,” Chaney says.

They re-recorded in a higher-end Los Angeles studio and were pleased with the powerful results as well as being able to address the songs again.

“The recordings had more electricity and energy to them, and the first were so thought out and refined that if we lost anything, it was on the first one,” Perkins says.

Preparing to hit the road in the next few months, TPC is eager to entertain.

“What we love is when art and entertainment meet together, and that's when we're on stage,” Navarro says.

Juggling roles as TV and radio host, dodging paparazzi and tabloid media and looking pretty are all piling up on Navarro's plate, yet he finds solace playing in TPC.

Fortunately, with all his projects, the music always comes first. He has defined a distinction between art and entertainment and says it's just a matter of “splitting up my energy for different forms of entertainment.”

What he doesn't enjoy are the relentless tabloid media who “broke into our cars and fucking hide out in front of our house and follow us.” He says they are the enemy and that he tries not to pay attention to what they write.

However, the band has a different view about music journalists. They feel that as long as the critic writes something, it's still coverage and it's getting the word out there. Also, Isaacs says he feels a special kinship with journalists because “a lot of them are music fans just like we are.”

Navarro believes that with the rise of Internet technology, journalists have less power over what people think because “everyone is a journalist.”

“Frankly, I'm more inclined to listen to what a 23-year-old kid in Houston thought about a record than what the back of Rolling Stone says,” Navarro says.

In fact, the members of TPC all concur that they never agree with the reviews in Rolling Stone. They say the critics always sit on the fence about albums. Well, except the Strokes.

“They will blow so much sunshine up the Strokes' ass, as if Julian Casablanca was sucking off Jann Wenner. I mean, why?” Isaacs says.

(ONe) is currently available. For more information, visit www.thepanicchannel.com