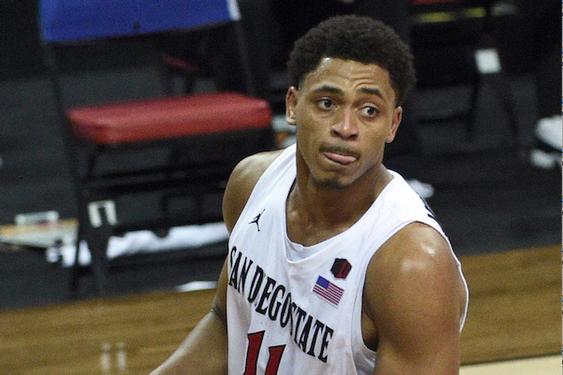 San Diego State's Matt Mitchell during action against Utah State during the championship game of the Mountain West Tournament at the Thomas & Mack Center in Las Vegas on March 13, 2021.

Information on San Diego State’s basketball website in 2017-18 and 2018-19 told only part of Matt Mitchell’s story. Details about his points and shooting percentages were spot-on. The pounds, not so much.

Mitchell was listed as 235 as a freshman and 240 a season later. He eclipsed 260 at one point, something that revealed itself on the court, in spite of being a productive starter.

The guard from Riverside found himself at a basketball crossroads. He could stay the course, contributing at a Division I program. Stagnation never took hold, though, as Mitchell decided to do something about it.

Out went the chips. In came the fruits and vegetables.

Now, Mitchell — who dropped somewhere in the neighborhood of 30 pounds along the way — is better conditioned, better proportioned and better equipped as the Aztecs prepare to dive into the NCAA Tournament on Friday against Syracuse.

“I would say my mentality, my diet, was probably the hardest part about the last few years for me,” said Mitchell, the first player in program history to be named Mountain West player of the year and tournament MVP in the same season. “As I moved on and matured and educating myself, it all just came to me. It just flowed, seemingly … not indulging in those snack foods.”

Mitchell built, well, a stronger and more efficient Mitchell. Slight changes in quickness allowed him to be more lethal on the break, better able to cut and move and find shots on the perimeter, while growing into a matchup nightmare in between.

“He’s a wrecking machine in the lane,” said Pete Gillen, a CBS Sports Network analyst and former coach at Xavier. “He’s so strong and physical for a guy 6-6, so he’s a tough matchup. A bigger guy, he’s too quick for, he’s got a good first step. A smaller guy, he can post you up.

“He can score at all three levels. He can hit the 3, he’s got a good mid-range game and he can post you up.”

This version of Mitchell, where size and quickness and handle are maximized, rattles scouting reports.

“You can’t move him off the spot,” senior teammate Jordan Schakel said. “There’s no bumping him off. Some guys get in the lane and they’re off balance. You can maybe put your body on them and bump them off their line, but that never happens with him.

“If you bump him off the line, it’s going to be a foul because he’s so strong down there.”

Talk about Mitchell’s weight stuck with him like an elite defender. That tells only part of the journey, though, as he became the leader of a team that wrapped up back-to-back conference titles, earned a No. 6 seed in the NCAAs and has won 14 in a row.

Confidence in his array of 3-point shots grew, particularly away from the comfy corners of the court that served as his home mailing address as an underclassman. He trimmed turnovers and found the delicate middle ground between attacking and valuing the ball.

“He’s been making a lot better decisions with the ball in his hands, causing the defense to collapse and kick out to the shooters taking a shot or throwing a lob to Nate (Mensah),” Schakel said. “Just giving the defense problems down there.”

Mitchell’s program legacy ballooned, instead of his waistline.

He’s the No. 6 scorer in Aztecs history, 21 points behind 1950s era star Tony Pinkins. He’s one of just four to be named Mountain West player of the year. He’s in the Top 10 of 13 career categories. He’s No. 9 in career starts.

On Wednesday, Mitchell became the 10th Aztecs player to earn All-America designation from the Associated Press after being named to the honorable mention team.

The senior owns a healthy and balanced stat line of 15.4 points, 5.5 rebounds and 2 assists, while shooting 43.7 percent from the floor, 36.1 from 3 and 81.5 at the free-throw line. He’s reached double figures in 21 of 24 games, while leading the Aztecs in scoring 10 times and rebounds nine times.

A smorgasbord of contributions, so to speak.

“When I saw Matt in high school, I just thought he was a fantastic player with a huge upside,” coach Brian Dutcher said. “I thought that because he was smart. He knew how to play. Matt knows how to take advantage of different situations. If he has a bigger defender on him, he’s not afraid to step out and shoot the 3 over him. If he gets a smaller defender, he can post them up.

“Matt has a very high IQ on the floor.”

The Orange and their trademark zone could be tested most and most often by Mitchell.

“The key to beating the zone is getting the ball to the foul-line area, to the high post, with a skilled guy,” Gillen said. “San Diego State does a nice job with that. They move guys in and out of there. Get Mitchell in there, who’s a good passer.

“Get a guy there, in that foul-line area, you can turn around and look underneath the basket and throw it there. You can throw it to the right or left corner. You can shoot it or drive it. That’s the key, the big weak spot of their zone — a skilled guy getting the ball there.”

That … and toe-to-toe toughness.

Polish off an orange? That definitely fits the diet.